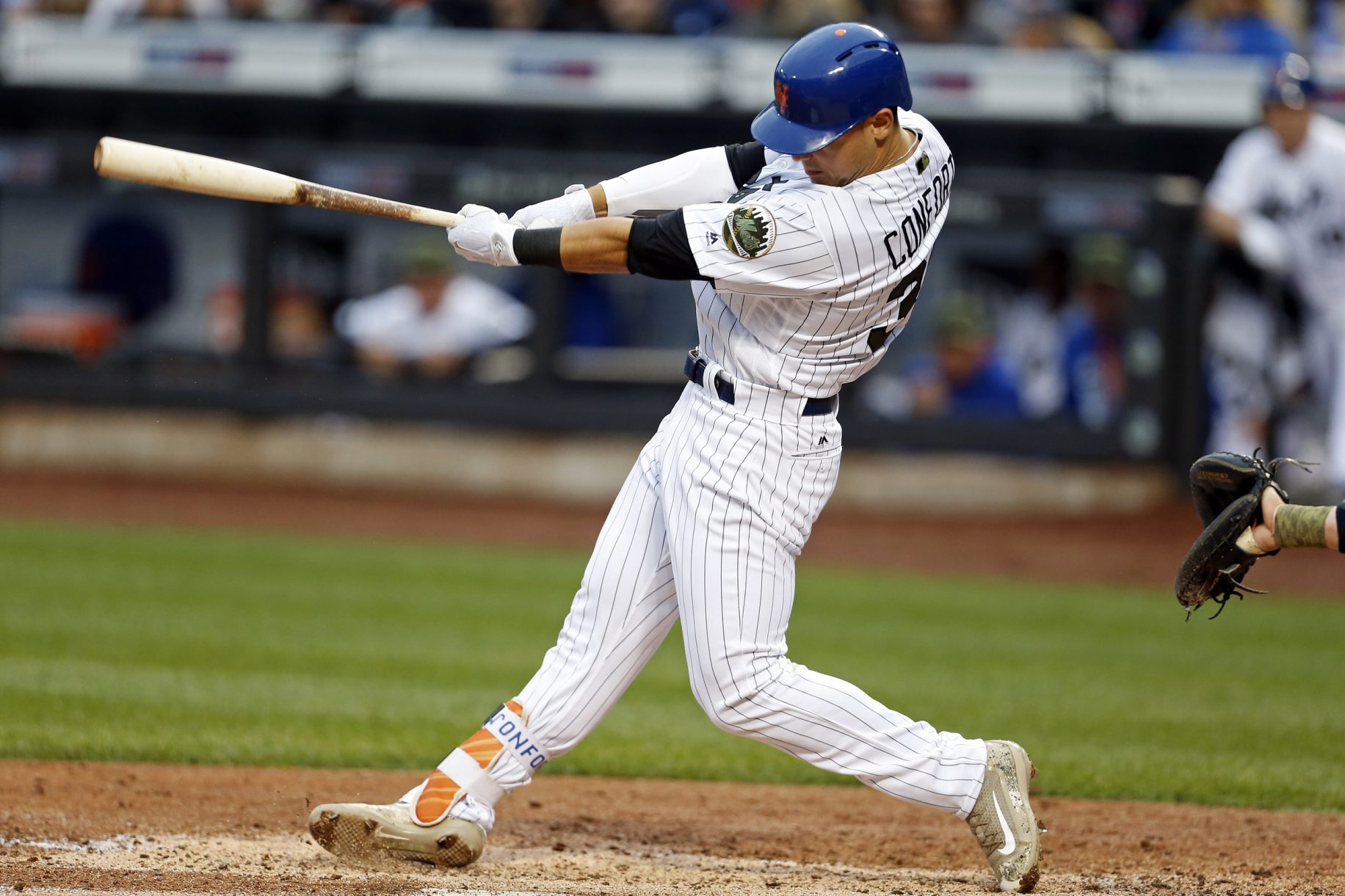 The New York Mets will have several difficult decisions to make regarding the long term structure of their outfield.

As the New York Mets continue their descent into free fall, many eyes are beginning to turn to 2018. It’s hard watch a reeling club many thought would contend deep into October, but reality is setting in that 2017 just wasn’t meant to be. The trade deadline is fast approaching and the Mets will have to consider making the appropriate changes to retool for next season.

If there’s one area of the team that will need to be addressed in the relatively near future, it’s center field. Michael Conforto has been adequate yet unspectacular when asked to patrol center field, at least defensively, that is. He’s athletic enough to fill in when necessary but his long term future is much better suited in a corner outfield position.

Jay Bruce has been one of the few bright spots for the Mets this season, but it’s hard to imagine the club re-signing him as that pushes Conforto into a full time center field role over the long term. Curtis Granderson is also unlikely to be resigned given his age and subpar performance over the past two seasons which opens the door for Conforto to man right field.

The answer could already be on the 40 man roster. It’s possible the Mets look to platoon Juan Lagares and Brandon Nimmo in center next season. Both are more than capable of playing center defensively, especially Lagares who is just three years removed from a Gold Glove award. Both are still young and athletic enough to competently play the outfield’s most demanding position. They also combine to make in the neighborhood of just $7 million next season which fits the Mets budget conscious agenda.

However, a Lagares-Nimmo platoon comes with multiple risks. Firstly, both have had their fair share of injuries at relatively young ages–something fans are exacerbated by on a yearly basis. Secondly, Nimmo is vastly inexperienced and is still a relatively unknown at the plate despite being a former first round draft pick. For a team that could have playoff aspirations again next season, this option comes with significant risk.

Let’s now address the elephant in the room–the free agent market. Lorenzo Cain is the best free agent center fielder heading into next winter. Will the front office shell out the cash for a player who finished third in the MVP voting as recently as 2015?

Cain is a career .287 hitter who has struck out over 100 times just once. He’s also stolen 28 bases in a season twice, bringing a high contact approach combined with speed that the Mets have lacked in recent years. His WAR has been at or above league average (2.0 or better) in five consecutive seasons. However, the case against him probably carries more weight than the case for him.

Cain will be 32 next season and likely will command a contract of at least four years. Sandy Alderson has not given many long term deals to players entering their mid-thirities and that could be the case with Cain once again. As he’s aged, his defense has declined which could lead to a switch to a corner outfield spot in the near future.

A player’s UZR (ultimate zone rating) is one of the most commonly used defensive metrics to judge performance. Since 2013, Cain’s UZR has declined from an outstanding 20.0 in 2013, to just 4.2 this season, per FanGraphs. That trend is only likely to continue as he ages. If Cain needs to switch to a corner spot, the Mets are once again stuck with a plethora of corner outfielders.

Carlos Gomez, Jon Jay and Colby Rasmus are other free agent options to watch next winter, but Cain is by far the most intriguing. Although he comes with his risks, he’s much more of a known commodity for a team that likely still will have expectations of contention next season.

There is also the obvious possibility of a trade, but the most likely targets won’t truly be clear until the offseason.

The New York Mets will have to start planning for a rebound in 2018 sooner rather than later. One of their main priorities will be who plays center field.

NEXT: Mets Primed to Lose Jose Reyes and Curtis Granderson during Offseason