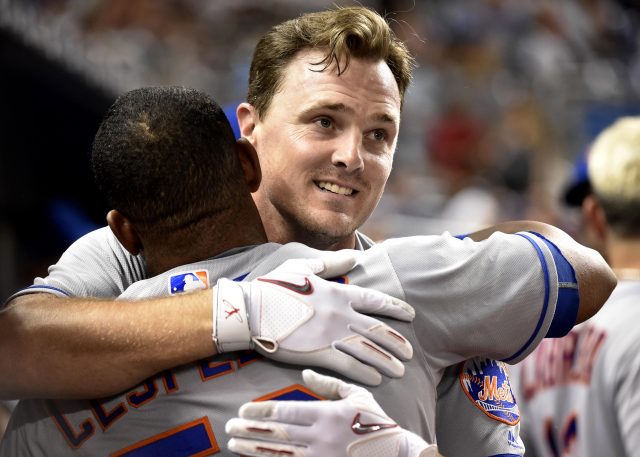 No doubt, the best and most feared hitter in the Mets lineup was Yoenis Cespedes. He provided consistent power throughout the year and was stellar defensively in left. His value was highly noticeable when he missed some time in July and August with a strained quad. The Mets offense was at it’s worst at that time. When he came back, the Mets offense soared and so did the team in their wild card run. If he opts out, he is definitely a must sign for the organization.

The Grandyman got off to a terrible start offensively with his low average, low RBI total, low walks and inability to hit with runners in scoring position. However, something clicked in September and he became the hitter he was last season with seven home runs in the month, helping him reach 30. Also, suddenly, became clutch, especially hitting the game-tying and walk homers vs. the Minnesota Twins back on September 17. Can’t throw, as expected, but still had the range to become a solid outfielder, playing all three outfield positions.

The marquee trade for the Mets during the trade deadline, Jay Bruce got off to a horrific start, batting .150 with only four home runs. But he woke up at the right time during the last week, hitting four runs in that span, helping the Mets reach the wild card.

Michael Conforto, the Mets early No. 3 hitter, got off to a blazing start in April, boosting his star potential but quickly fell apart once it became May and never found a consistent groove the rest of the way. He was then bounced between minors and majors a couple times.

The offense from Juan Lagares was still the same. He couldn’t hit righties but hit lefties. Defensively, he was the 2014 Gold Glove version once again, adding more highlight reels to his resume. However, one of his reels came at a big cost when he injured his thumb making a diving catch back in June and had to go to the DL while having surgery on it. Was able to come back in September on limited duty.

Brandon Nimmo came in at the start of July and started with a bang, hitting a three-run homer vs. the Chicago Cubs on July 1. He then saw limited time and was sent back and forth in the minors before coming back to the majors in September to finish it off. Was mainly a reserve the rest of the way but had some pinch hits in the last month.

Ty Kelly was also on and off in the minors and majors. Kelly wasn’t much of an offensive force but provided depth in the outfield, was gritty at the plate, and provided some speed as a pinch runner.

Alejandro De Aza got off to a terrible start was nearly released but played much better in July, saving his season. We didn’t see much the rest of the way but had a few big homers at the end of August that turned the Mets season around.