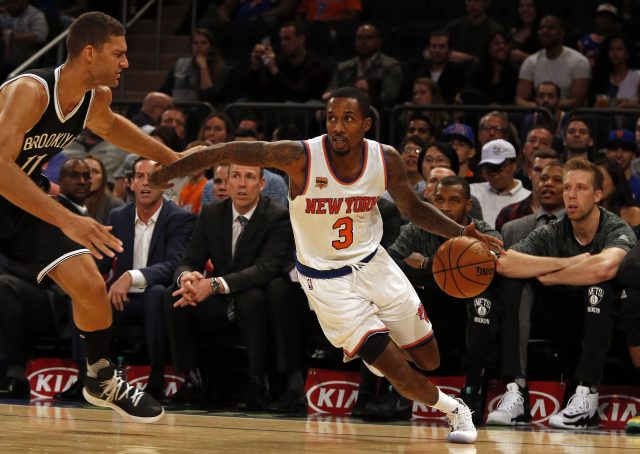 Newly acquired Brandon Jennings is putting on a show for the New York Knicks at Madison Square Garden with the Brooklyn Nets in town.

Brandon Jennings, one of the quickest 1-guards in the game today, put on a show at Madison Square Garden on Saturday night with the Brooklyn Nets in Manhattan.

With Derrick Rose in California attending to his off-court issues, B-Jennings received the start and sparkled to the tune of four points, four rebounds, one dazzling steal, and four beautiful assists.

Two of these assists came on tremendous pace pushing plays:

Don't blink, you may just miss B-Jen making plays. The #Knicks went from 0 PGs to now having a legit 2. @brandonjennings pic.twitter.com/YFDvrZgom2

Both plays resulted in dunks, one by Marshall Plumlee and the other by young Kristaps Porzingis.

With a few minutes remaining in the game, the Knickerbockers hold a commanding double-digit lead.

NEXT: D-Rose's Lawyers Ask For Mistrial