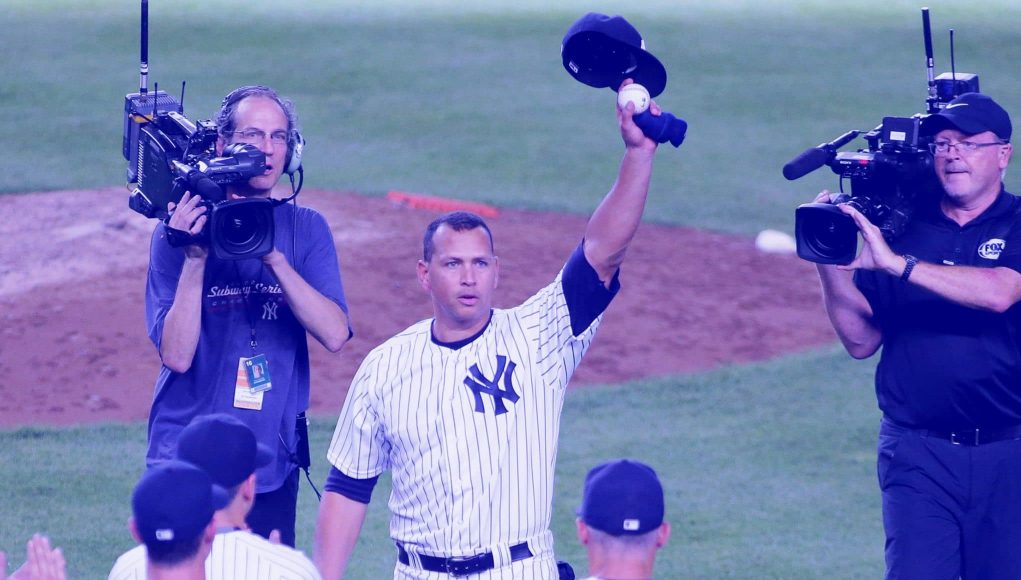 Alex Rodriguez was the most polarizing figure during his twelve seasons in pinstripes. On Friday night, he got the respect he deserved.

The New York Yankees’ pregame ceremony for Alex Rodriguez summed up his entire career in pinstripes.

Not the best fit. Awkward at times. Rewarding, but with a catch.

He was met by Reggie Jackson — who, although has his number 44 retired, isn’t endeared by the fan base like former teammates Ron Guidry, Thurmon Munson, Graig Nettles, or Willie Randolph — along with Didi Gregorius, Starlin Castro, and Mariano Rivera, all four who helped lead out family members of Rodriguez.

There was no grand speech. There were no outlandish parting gifts. Just a base signed by current Yankees teammates and a home jersey in a frame.

Even the presenters of the gifts — Hal Steinbrenner and Jennifer Steinbrenner-Swindal — did so half-heartedly, as mother nature clearly had other plans.

There were no Yankee greats accepting Rodriguez into their sacred brotherhood.

Rodriguez wanted a celebration and the Yankees gave it to him, but it just didn’t feel organic.

That was until he stepped up to the plate for the first time.

He was one of them that always stood out. Rodriguez always had the majority of the Yankees fans on his side, but never the entire stadium.

But on Friday evening, as A-Rod came up to bat, a boo wasn’t heard. Instead, the packed Yankee Stadium crowd rose to their collective feet, offering a round of applause for a man who accomplished so much in pinstripes, no matter how tainted those numbers may be.

Rodriguez reached milestone after milestone in navy and blue. 400 home runs, 500 home runs, 600 home runs, 3,000 hits, two MVP awards, and a World Series championship. Countless records were broken, both in the illustrious history of the Yankees and in the game itself.

Sure, he also smacked the ball out of Bronson Arroyo’s glove, yelled at Howie Clark so he’d miss a routine pop-up and went through the whole Biogenesis scandal, but Rodriguez always played his heart out when he had the interlocking ‘NY’ over it.

Fans finally gave him his due.

A standing ovation. Let’s go A-Rod chants. Thunderous cheers as he belted a double into the gap in right-center field.

It happened through each of his four at-bats. It happened again when he played third base one last time and was removed after one out.

Rodriguez, with tears in his eyes, was basking in something he didn’t hear much throughout his time in New York: the adoration from his home fan base.

Will Rodriguez have a plaque dedicated in Monument Park in his honor someday? I wouldn’t completely rule that out. Will his number 13 be retired for good? If George Steinbrenner was around, maybe. But not in today’s world.

But does that really matter? Through thick and thin, the ups and the downs, the good times and the bad, Alex Rodriguez exited his last game with the Yankees with his head held high while the fans were on their feet.

It may have taken twelve seasons, but on August 12, Rodriguez earned his pinstripes.

He finally became a Yankee.

NEXT: Joe Girardi Choked Up In Postgame Presser