The feel-good train known as the New York Mets just keeps on trucking along as tonight in Miami they take down the Marlins 5-1.

With the Washington Nationals fully engaged with the Arizona Diamondbacks right now (3-3 in the eighth-inning), the New York Mets now have a chance to go up two games in the NL East.

This, after their 5-1 victory over the Miami Marlins down in South Beach.

The Mets benefited from a four run ninth-inning which featured a two-out rally this lineup wouldn’t have dreamed of pulling off just a week ago. While the inning was home run free, Juan Lagares delivered the two-run triple that gave his club the lead they wouldn’t relinquish.

.@juanlagares2 shoots that one in the gap and brings home both runs with a triple! And he’s fired up!! #LGM

Jon Niese received the start and pitched beautifully, just as he has since the birth of his child about a month ago. He only surrendered one run and four hits while striking out six over seven innings.

If he hadn’t done enough already, Wilmer Flores improved upon his status in this one. In the sixth-inning with the Mets trailing 1-0, he evaded J.T. Realmuto at the plate with an incredible slide off a Ruben Tejada RBI single.

The Mets now move to 57-50 on the season. They’ll play Game 3 of the series tomorrow night.

Consistency of 2022 Mets is rare sight in franchise history 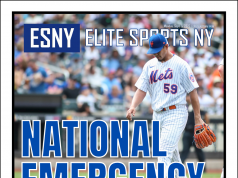 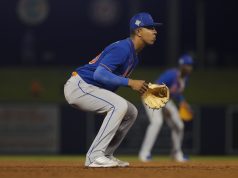 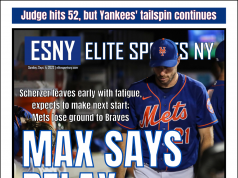