When you think of the Yankees, you think of one thing. Success. The NY Yankees have won a whopping 27 World Series titles, by far the most in MLB history. A franchise filled with a rich history of success is always in the running to win the next World Series

What are the odds the Yankees Win The World Series?

When betting on the New York Yankees to win the 2020 World Series, be sure to shop for the best odds. With plenty of online sports betting sites to choose from, finding the best odds is a great way to be more profitable in the long run. DraftKings, Unibet, and SugarHouse are offering the longest odds currently at +400. This means if you bet there instead of William Hill, you would get an extra $100 for every $100 bet if the Yankees did win the World Series. 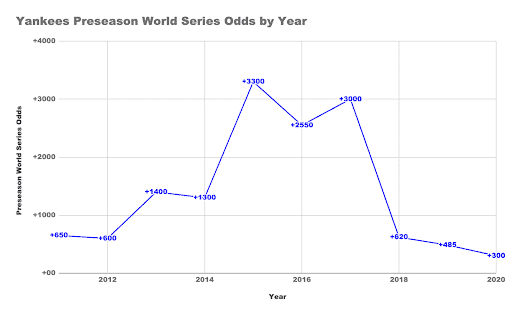 Betting on the Yankees +350 to win the World Series? @MikeFrancesa doesn't love that bet. pic.twitter.com/SGRJK9bTMd

Severino news has little impact on #Yankees World Series odds at DraftKings sportsbook….. move from +350 to +400.

The Yankees’ World Series odds took a slight hit after Severino’s injury news, as they dropped from +350 to +400 on DraftKings Sportsbook. Luis Severino will miss the entire 2020 MLB season with Tommy John surgery, which puts the Yankees in the market for another starting pitcher.

Yankees Are A Solid Bet For Over’s

Last season, per TeamRankings.com, the Yankees finished with a record of 88-77-6 when it comes to overs. That means all Yankees games were 11 games over .500 when betting the over. This is a rate of 53.3%, which was good for fourth-best in baseball. The Pittsburgh Pirates had the highest “over” rate, of 59.6%.

Of all teams last season when it comes to betting the run line, the team with the highest cover percentage was the New York Yankees at 57.9%. The Yankees’ run line record was 27 games over .500, and topped the leaderboard over the Washington Nationals and the Oakland Athletics.

The Yankees have played the Dodgers in the World Series 11 times, the San Francisco Giants seven times, the Cardinals five times, and the Braves four times.

Nine managers have won World Series titles with the New York Yankees, including five with multiple wins. Joe McCarthy and Casey Stengel each have seven World Series victories, Joe Torre has four, and Miller Huggins follows with three. Ralph Houk is the only other Yankees manager with more than one World Series. Bucky Harris, Billy Martin, Bob Lemon, and Joe Girardi all have one World Series win.

Yogi Berra holds the record for the most career hits in the World Series, as well as the most at bats in his career (259).

Whitey Ford holds the all time record for most World Series wins with 10. Tied for second all time are Red Ruffing and Allie Reynolds.