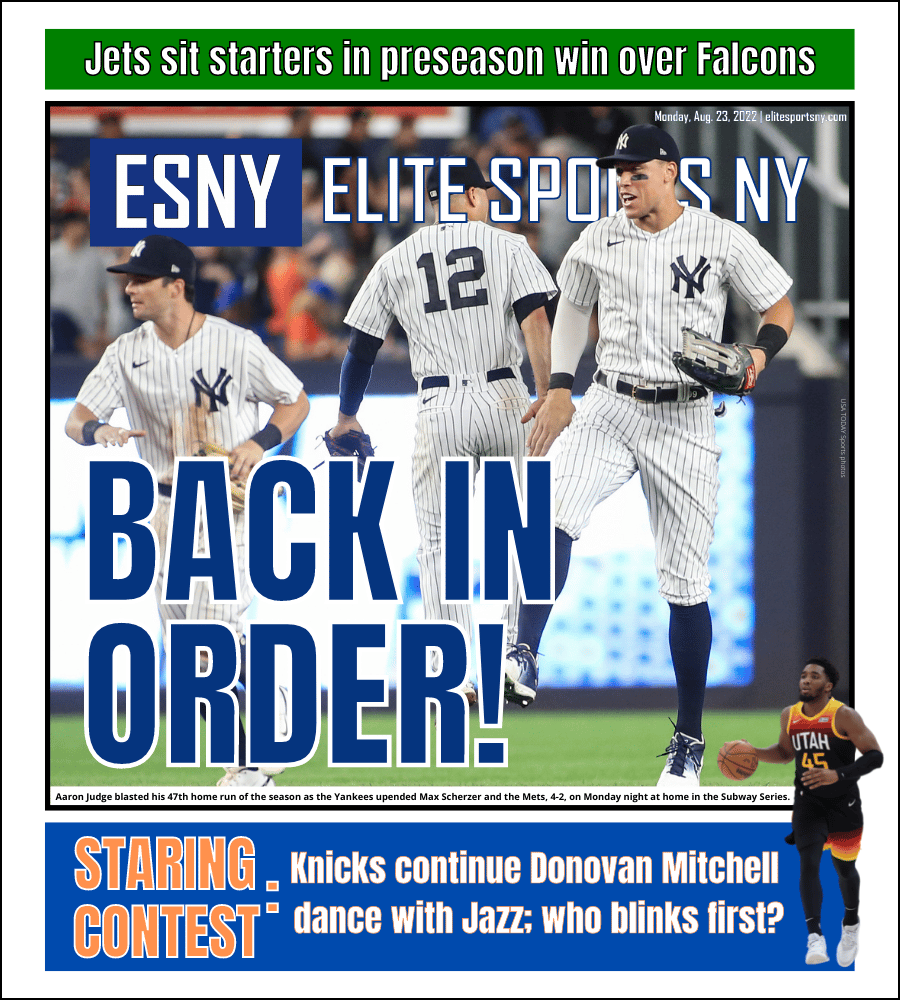 The lead story: Break up the Yankees. They’ve won two games in a row now, and they beat Max Scherzer to do so. The Bombers beat the Mets, 4-2, on Monday night in the Bronx behind Aaron Judge’s 47th home run and another strong day from Andrew Benintendi. Now they will try to split the 2022 Subway Series at two games each (pending October) when Frankie Montas takes on Taijuan Walker on Tuesday.

The sidebars: The Jets held out their regulars (including interim starting quarterback Joe Flacco) and still managed a 24-16 preseason game win over the Falcons at MetLife Stadium. And the Knicks remain in pursuit of a blockbuster deal with the Jazz for Donovan Mitchell, with trade talks expected to pick up soon.

The standings: The Yankees (75-48) have an eight-game lead on the Rays in the AL East. The lead is even games in the loss column. Their lead for the AL’s No. 2 seed is 9.5 games over the Guardians (eight in the loss column).

The schedule: The Mets and Yankees will conclude the Subway Series at 7:05 p.m. (Amazon Prime, SNY, TBS) at Yankee Stadium. The Liberty will play the Sky in Game 3 of the WNBA playoffs first round at 9 p.m. in Brooklyn (ESPN).

MORE ON ESNY:
• Giants’ Kayvon Thibodeaux avoids major knee injury, but will miss time
• Do Yankees finally have brighter days ahead?
• This is who will keep Mets from World Series (and it’s not Dodgers)
• Paul O’Neill Day: Who will Yankees honor in Monument Park next?
• Paul O’Neill shuts down vaccine questions before Yankees honor