The Yankees called the Nationals about Juan Soto. But it did not get much farther than that.

General manager Brian Cashman kicked the tires with Washington general manager Mike Rizzo about the superstar outfielder. But the Yankees never had a chance. Cashman said that was clear before the blockbuster deal that sent Soto to the Padres.

“There was nothing coming out of the Washington operation that his best match was coming our way,” Cashman said Thursday during an interview with WFAN’s Craig Carton and Evan Roberts.

“[Rizzo’s] heart and eyes were set on a certain very few locations more so than others. …. I think it was very predictable in the end that San Diego, if Soto was going to get moved, was the most-likely candidate. There or St. Louis.”

Soto is under contract for two more years after this one. The Scott Boras client will almost assuredly hit free agency after the 2024 season. He should command a deal worth north of $500 million if all goes well. The Yankees figure to be more of a contender then, although it’s too early to forecast exactly how things will stand.

Aaron Judge’s pending free agency will likely impact how the Yankees approach Soto’s future availability. Angels two-way phenom Shohei Ohtani may also have a say. Ohtani will be a free agent after the 2023 season and could be traded before then. Cashman hinted the Yankees made calls on him.

“I can tell you I engaged the 29 other opponents of ours at all levels of their rosters for what was in play,” Cashman said. “And I asked about players that might not have even been in play, and see if I could coerce those opponents to put them in play … There are so many conversations and failed efforts on a lot of platforms.” 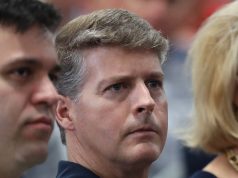