A big night in Brooklyn

The big NFL news on Wednesday was the surprising departure of a head coach. Bruce Arians announced he is stepping away from the role of head coach in Tampa; the Bucs immediately ripped up the contract of Todd Bowles and gave him a five-year extension to take over the head coaching job.

The big NBA game on the slate for Thursday is in Brooklyn, where the Nets — with Kyrie able to play at home — will host the Bucks. Could this be an Eastern Conference playoff preview?

What do we do?

The Mets and Astros were tied at the end of nine innings on Wednesday. And neither manager knew if they were going to play extra innings! (They did, and the Astros won 5-3 in 10 innings.)

LOVE this moment captured by @SNYtv as Buck Showalter and Dusty Baker try to decide the plan for extra innings headed to the bottom of the 9th in a tied Spring Training game pic.twitter.com/9rXDPWn0j0

Andrew Copp scored 94 seconds into overtime and the Rangers won their fourth in a row. They have won eight of their last 10 and are now three points up on Pittsburgh for second in the Metropolitan Division.

The GOAT said goodbye as only Tom Brady can.

A message on Instagram from Tom Brady to Bruce Arians: pic.twitter.com/3WY2RUSyrY

Slumping Knicks drop another one

The Knicks fell to six games under .500 at Madison Square Garden this season with Wednesday night’s 125-114 loss to the Hornets. No bueno, boys.

Too smooth with it 😵‍💫 pic.twitter.com/xG9z6cQLqu

Own a piece of history

Hockey fans — especially Islanders fans — with the right amount of disposable income might be interested in two items up for auction right now. The prices are up to $8,500 (each) on two of Clark Gillies’ Stanley Cup championship rings.

Wanna own a piece of #Isles history? @GoldinCo has two pieces up for auction right now that would change your collectionhttps://t.co/kYMIZlgq6U 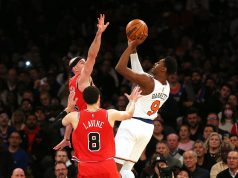