The NBA MVP is down to three players — Nikola Jokic, Giannis Antetokounmpo, and Joel Embiid. No one else is “in the conversation.”

“In the conversation…” is one of the most overused terms in sports and it’s one phrase we hear whenever MVP voting is discussed. It’s usually a crutch for writers and analysts when discussing a player who is having a great season but isn’t going to actually win the MVP.

Including anyone and everyone “in the MVP conversation” is how we get Paul George referring to a season where he didn’t win the MVP as “his MVP season.” For what it’s worth, George finished third in voting and did not receive a single MVP vote in 2018-19, the same “MVP season” he’s referring to in this clip.

paul george- “i’m on muthafuckas asses this year. i’m back with the trainer from my mvp season. i get an offseason to work on my game (and not rehab). i listen to kobe motivational quotes while i lift, while i work. i’m as locked in as you can be.”

By the All-Star Game, the award should almost always be narrowed down to two or three players. This year, Nikola Jokic, Joel Embiid, and Giannis Antetokounmpo are the top three candidates according to a straw poll of voters done by ESPN’s Tim Bontemps.

This international trio is well ahead of the pack. With five slots on this straw poll, it’s no surprise to see 13 different players make this list. But can we all agree that anyone referring to Jayson Tatum or Ja Morant as “in the conversation” for MVP is tiptoeing around the question at the very least? The other explanation is that this person is delusional. 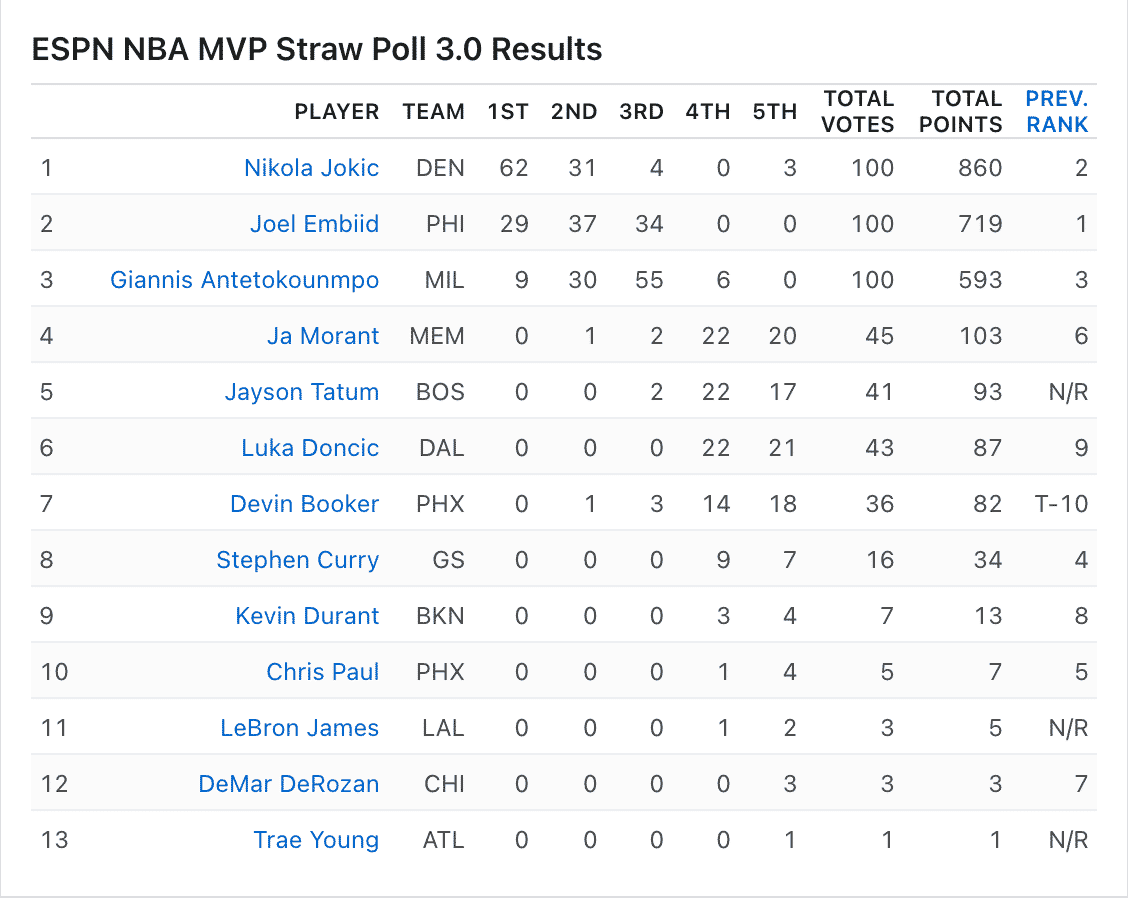 It’s Jokic, Embiid, or Giannis at this point. All three have legitimate cases. Although Embiid has been the odds-on favorite for the last few months, Jokic is making his push to become the first back-to-back MVP since — well, since Antetokounmpo did it in 2019 and 2020.

Dive into the advanced stats, watch the film, and form your opinion on these three guys. But we don’t need to play this game where we start including Morant, Tatum, or anyone else “in the conversation” as a consolation prize.

There is only one MVP, no matter the extent of the conversation.