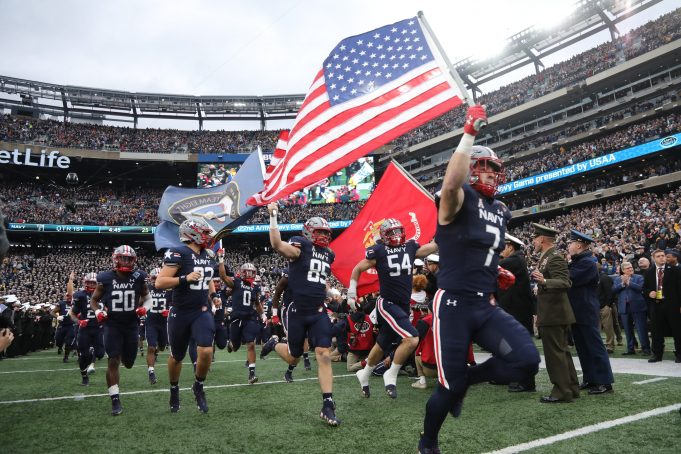 Army and Navy faced off in the rivalry’s 122nd chapter Saturday afternoon.

The weather wasn’t magestic, but the scene Saturday at MetLife Stadium surely was.

Following a 2020 battle at West Point due to the COVID-19 pandemic, one of college football’s ultimate rivalries was back at a neutral site.

Amid the rain and fog, the Army Black Knights and Navy Midshipmen set the stage at East Rutherford. Fans in the stands; cadets in uniform, 82,282 in attendance — it was surely a sight to see in Jersey.

Of course, the actual on-field play in this game isn’t like what it is in, say, the Big Ten or SEC.

Onlookers shouldn’t have expected superb air attacks from either respected squad — and neither formulated one.

But that’s one of the various reasons why this rivalry is so special — the option game provides valuable glimpses of ground and pound football. It’s why old schools fans of this incredible sport adore this event.

Needless to say, scoring wasn’t supposed to be a huge part of this game, which is why the betting totals were so low.

However, the early part of the contest told a different story than some likely were anticipating.

Army led 10-7 after the opening quarter. The 17-point total already surpassed the total from 2020’s edition of the event, which concluded with a 15-0 final score in favor of West Point.

Army’s early scoring was thanks (in-part) to a 56-yard touchdown run from senior quarterback Christian Anderson. Navy’s lone first-quarter score, on the other hand, came via an eight-yard rushing touchdown from quarterback Tai Lavatai.

The game slowed down following its fast-paced commencement, however. The second quarter didn’t provide the same scoring-based narrative as the first.

Five straight scoreless possessions arose to begin the second frame, culminating with a missed 53-yard field-goal attempt from Navy placekicker Bijan Nichols. It would’ve been the longest kick in the history of this storied rivalry.

The quarter wasn’t completely ridden from points though — Army rebooted its scoring efforts with a 32-yard field goal from Cole Talley. This gave the Black Knights a 13-7 lead heading into the locker room prior to fireworks, a United States flag, and an incredible rendition of God Bless The U.S.A. lighting up East Rutherford at halftime.

At the start of the second half, it looked as if the first-quarter scoring frenzy was to repeat itself. A 10-play, 74-yard Navy drive that lasted nearly six minutes was capped off with a two-yard touchdown run for Lavatai, what was his second score of the day. Following a successful extra point, Navy took its first lead (14-13).

But the low-scoring tradition of this rivalry wouldn’t die Saturday, despite touchdowns to begin either half.

The three third-quarter possessions following Navy’s second touchdown all ended in punts, repeating much of the vibe the second quarter introduced.

Given these two offensive systems though, and the fact running the football is a large part of either program’s philosophy, you don’t need a monstrous lead to somewhat pull away in this game. Both Army and Navy already knew that but were reminded of the ideology when Navy extended its lead to 17-13 with 6:10 remaining thanks to a 43-yard field goal from Nichols.

Army recorded just one first down on the ensuing drive before punting it back to the Midshipmen, but earned one final shot at victory when the defense forced a three-and-out.

The Black Knight’s final offensive drive started off great with a nine-yard pass play and a third-down conversion two plays later. But after two incompletions and a short throw, Army was faced with a 4th-and-3, of which it did not convert due to Navy stuffing Anderson on an option keeper.

Following a few kneel downs, Navy emerged victorious for the 62nd time in this rivalry, extending its lead in the series to 62-53-7.

And thus, the 122nd chapter of the Army-Navy Game concludes. These two incredible schools and programs that respect each other but still maintain a highly competitive rapport didn’t disappoint Saturday at MetLife.

An incredible event it was — an honor for anyone to witness.