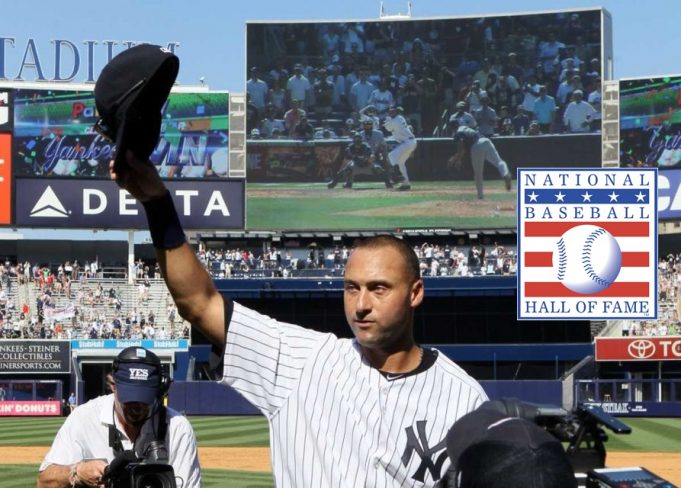 A banged up Derek Jeter was on the verge of 3,000 hits. For once, he showed off his Captain’s swagger in accomplishing something.

It’s a gorgeous Saturday afternoon in the Bronx. Yankee Stadium is sold out, the crowd the most raucous it’s been since Game 6 of the 2009 World Series. The New York Yankees are starting to age as a team, and it shows, but they still sit second in the AL East and only a game behind the Red Sox.

Every sports bar near Yankee Stadium and in the five boroughs is prioritizing the game. History is just around the corner.

Fresh off a calf injury, Derek Jeter is two hits away from 3,000 hits, not to mention becoming the first Yankee to achieve the milestone. I, now a spunky 25-year-old, am on the edge of my seat in the House that Ruth Built, hot dog in one hand and overpriced beer in the other.

Well…sort of. I wasn’t so much in Yankee Stadium as I was watching on my friend’s big screen TV. At his mansion in Los Angeles. While he was away working on a shoot for the day.

For what it’s worth, in typical LA houseguest fashion, I microwaved some hot dogs and drank a fancy microbrew I found in his fridge, so the above scenario is at least semi-accurate? Maybe I was at least 25% at Yankee Stadium in spirit? Right?

Moving on, Jeter was obviously well aware of the significance of this day. Even at 37 years old, his competitive spirit never died. He was going to make history the Derek Jeter way, even if it meant going a little off-brand.

Derek Jeter had a chip on his shoulder

A lot of people forget that by this point, Derek Jeter’s relationship with the New York Yankees had changed, and not in a good way. He hit free agency after the 2010 season, a year in which his production slipped and he hit .270, his lowest batting average since he hit .250 over 15 games in 1995.

Negotiations with general manager Brian Cashman got tense. The Yankees front office was now more invested in analytics and the numbers told a hard truth. Jeter was not only getting older and generally declining, but it turned out the five-time Gold Glover was actually a very poor fielder. This was particularly shocking, especially since Jeter won a Gold Glove in 2010.

Cashman even went so far as to dare Jeter’s agent to test the market to find a better contract. Shortly after, Jeter inked a three-year, $51 million deal with a fourth-year option. At the press conference announcing the deal, the Yankee captain was shockingly unfiltered, saying he was “angry” at how the process went public.

“I’m going to be honest with you guys, the thing that bothered me the most was how public this became,” said Jeter. “This was a negotiation that was supposed to be private. It was an uncomfortable position I felt I was in. It was not an enjoyable experience because throughout the years I’ve prided myself on keeping things out of the papers and out of the media. This turned into a big public thing. That is something I was not happy about. I let my feelings be known.”

It also didn’t help matters that Jeter got off to a slow start in 2011, probably because of more analytical adjustments at the insistence of hitting coach Kevin Long. This didn’t work. When Jeter strained his calf in June, he was batting a meager .260 with just two homers and 20 RBI.

But the Derek Jeter who stepped up to bat against the Tampa Bay Rays that afternoon in July was a different man. He’d spent his rehab assignment going back to the approach he used in the minors and was locked in. Even if he only hit .222 since coming off the disabled list, he knew he could still go. The Captain was not on the decline, far from it.

His first plate appearance said it all. Jeter led off the Yankee half of the first inning with an eight-pitch AB, sneaking a single to left. New York didn’t score, but everyone knew the stakes. 2,999 career hits.

Tampa Bay took a 1-0 lead in the second on Matt Joyce’s home run, but they were in trouble. The Yankees were making starter David Price work, so much that he threw 44 pitches in just two innings.

That number grew to 47 in the third after Brett Gardner grounded out. If Price played his cards right, he could escape without further increasing his pitch count.

The lineup turned over and Derek Jeter stepped up to bat for the second time, one hit away from further cementing his Hall of Fame legacy.

“History with an exclamation point!”

Unfortunately for David Price, Jeter was prepared as he strutted to the plate to Sean “Puffy” Combs’ ’90s classic, “Come With Me.”

A fastball inside for a ball. A slider nicking the outside corner for a strike. A fastball in the dirt. A cutter fouled back to the screen. A cutter down and in to run the count full. Two more foul balls.

The eighth pitch of the at-bat was coming. At this point, Derek Jeter knew that he could beat David Price. He’d seen everything in terms of pitch selection. Now, it was just a matter of recognizing the next one coming out of the big lefty’s hand.

Curveball, 78 miles per hour, hung right where Jeter could time his swing accordingly as the crowd chanted his name at full volume.

“See ya!” cried longtime Yankees play-by-play man Michael Kay as the ball landed in the left-field bleachers. “3,000! History with an exclamation point! Oh, what a way to join the 3,000-Hit Club! Derek Jeter has done it in grand style!”

The entire team awaited their captain at home plate, and his best friend Jorge Posada was first with what was surely a bone-crunching hug. It was practically a receiving line at a wedding. Even his longtime friend/enemy/rival whatever Alex Rodriguez got a high-five and a hug, letting out a joyful laugh as they embraced.

In California, my reaction was as expected. I dropped my plate on my friend’s very nice and probably very expensive rug as I jumped on the couch with my flip flops on. I screamed and laughed and cried as his very scared dog ran into the room and started barking at me.

It didn’t matter. Derek Jeter was officially a Hall of Famer despite his true greatness never quite being fully recognized. I snuck the plate’s remains into the garbage out front, flipped a sofa cushion or two, gave the dog a treat, and settled in for the rest of the game.

But Jeter’s day wasn’t finished. The Yankees won the game 5-4 on the back of Jeter having a 5-hit game. He added a double and a single after his legendary homer and also scored another run. In the bottom of the eighth, his RBI single broke a 4-4 tied and proved the game-winning hit.

For the rest of the season, from that game on, Derek Jeter hit .338 as the New York Yankees won yet another AL East crown before another early playoff exit. Even as he entered the twilight of his career, he was still capable of stepping up in big moments. 3,000 hits wasn’t the end of Jeter’s career by any means.

Lucky for the fans, the Captain wasn’t done with the spotlight just yet.