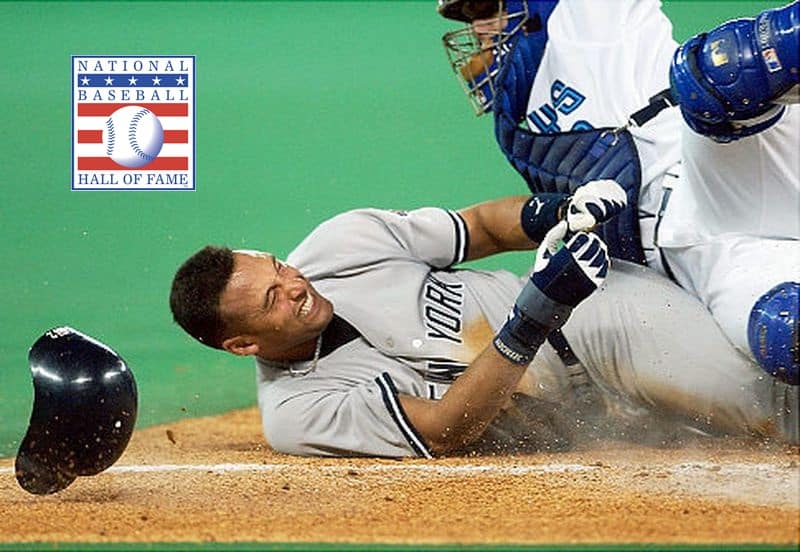 The New York Yankees had to begin the 2003 season without Derek Jeter. Luckily, his leadership had them prepared for it.

Derek Jeter and the New York Yankees seemed immortal after winning their third straight World Series in 2000. Even after closing the season on such a sour note, the Bronx Bombers prevailed on the back of their shortstop and World Series MVP.

It was almost as though winning three titles in a row reminded everyone. This was a great team down to the core.

In the playoffs, the Yankees won another hard-fought ALDS against Oakland. The definitive moment, of course, came from Derek Jeter. His literal shovel pass to Jorge Posada preserved a 1-0 lead in Game 3, and “The Flip” was born. It also helped that Jeter, who hit .311 in the regular season, hit .444 in the series.

But after that, he struggled. Derek Jeter only hit .136 for the rest of the postseason. This didn’t help when the Yankees ran head-first into a talented Arizona Diamondbacks team, though Jeter became “Mr. November” with a notable walk-off home run in Game 4. New York fell in seven games, and the streak was over.

Such was the first in a string of cruel reminders that Derek Jeter and the New York Yankees weren’t invincible. It happened again a year later when the team won 103 games, but lost to the Los Angeles Angels in the ALDS.

And in 2003, the rudest of awakenings came when Derek Jeter missed the start of the season.

Down goes the Captain

Okay, so Jeter didn’t *technically* miss Opening Day. On March 31, 2003, he was in the lineup when the Yankees faced the Blue Jays in Toronto. Furthermore, he doubled in the first inning and came around to score.

I remember watching this game at my dad’s house, probably after I’d either rushed through or ignored some of my homework. Algebra II and The Great Gatsby could wait. It was Opening Day.

Everything came to a screeching halt in the third inning. After drawing a walk, Jeter tried to advance to third base when Jason Giambi grounded out to first. The only problem was Blue Jays first baseman Carlos Delgado noticed and fired to third.

Derek Jeter was tagged out as his left shoulder collided head-on with catcher Kent Huckaby. The Yankees’ star player immediately clutched at his arm, screaming and writhing in pain.

My young heart sank. The season was over on Opening Day. Finished. Kaput. Gone the way of Manifest and straight up canceled, only Netflix didn’t yet have the means to make the save. Without Derek Jeter setting the tone at the top of the order, how could the New York Yankees survive?

“Relax,” my dad said, my jaw still on the ground and crashed through our downstairs neighbors’ ceiling. “It’s the first game of the season. It’s early.”

He clearly knew something I didn’t because at that moment in time, I’d forgotten Derek Jeter played for the New York Yankees.

As the Yankees won the game 8-4, we later learned Jeter dislocated his shoulder and would miss at least a few weeks. In the meantime, Enrique Wilson and prospect Erick Almonte would share time at shortstop. It was hard to see either man replicating Jeter’s level of production.

Well, it turns out they didn’t need to. Derek Jeter returned to the lineup on May 13 and, believe it or not, a sigh of relief did not emanate from the Yankees clubhouse. Rather, it was almost as though Jeter never left.

In his absence, the Yankees went 26-11. When Jeter came back, they held a three-game lead in the AL East. It didn’t matter that Derek Jeter was injured and missed six weeks of action. This whole time, his leadership had his teammates prepared to still be at their best without him.

The rough road ahead

I neglected to mention earlier that a few years prior to this, the New York Yankees secured a long-term future with Jeter. Prior to the 2001 season, both sides agreed to a 10-year, $189 million extension.

Sure enough, not long after he returned from his injury in 2003, George Steinbrenner made it official. Derek Jeter was the new team captain, the first since Don Mattingly’s retirement in 1995. He would hit .324 that season as the Yankees got back to the World Series. Jeter hit .314 in the playoffs, but New York lost in six games to the Florida Marlins.

For the next five years, Jeter’s leadership would be tested. The Yankees endured a seemingly endless stream of playoff underperformance that ranged from unlucky to flat out absurd. Be it blowing a 3-0 lead in the 2004 ALCS or never getting past the ALDS, Derek Jeter and his New York Yankees just couldn’t get over that hump.

For a long, long time, it seemed the Jeter Dynasty was truly over and New York’s time as a World Series city was done.

Fate had other ideas.