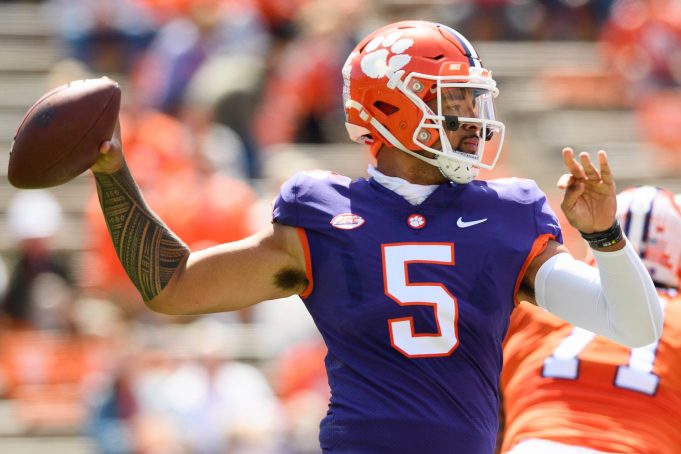 College football begins this weekend! Which signal callers should you keep your eyes on this season?

As the college football season begins today, we get to start our conversations about draft stock, Heisman hopefuls and College Football Playoff odds.

What a time to be alive!

With that, who are the top quarterbacks you should be watching this season? Here are our top ten heading into the season. Let us know who your favorite is this season — and who you think will make the best NFL quarterback in the future!

The talented sophomore quarterback at Oklahoma completed 47 passes of 20 or more yards last season, putting him squarely in the conversation for the Heisman and the top pick in the NFL Draft. If Oklahoma has national championship hopes, they rest squarely on Rattler living up to the hype. The eyes of the Big 12 — and the SEC (lol) — will be on him from start to finish this season.

Howell is a legit Heisman front-runner and could make North Carolina’s prolific offense a threat to Clemson in the ACC. In two years as the starter for the Tar Heels, Howell has 76 TDs and has accounted for more than 7,400 total yards. He’s in the picture for potential top overall picks in the 2022 NFL Draft.

In 10 games last year, Uiagalelei went 78-of-117 for 914 yards with five touchdowns and no interceptions subbing for Trevor Lawrence. The sky is apparently the limit for Uiagalelei, who will have fans and sports writers checking their spelling all year.

If the Bearcats are going to crash the College Football Playoff party this season, Ridder’s going to be the man. And he has been in his career. He boasts a 30-5 record as Cincinnati’s starter and is the reigning AAC Offensive Player of the Year. He’s got Cincinnati in the top-ten in preseason polls this year.

Slovis is the latest USC quarterback to have the hype and pedigree to be one of the nation’s best at the position; expectations are that he’ll lead a talented offense to big production in 2021. He’s completed 70 percent of his passes in two years as the Trojans’ starter.

A former Auburn commit, Willis is in the conversation for the nation’s top dual-threat QB. He threw for 20 touchdowns last season while leading all FBS quarterbacks with 944 rushing yards and 14 more touchdowns when he called his own number. He’s a legit first-round NFL draft talent at a school you might not have watched before last year.

If you like happy-chucking quarterbacks, Corral is your guy! He led the SEC with eight completions of 40 yards or more last season and, if you watch Ole Miss, you know he’ll get more chances to go deep this year. Big plays are his calling card and we love to see that from a quarterback.

The former USC commit will have dynamic weapons in Georgia’s offense this season and had a couple huge games against Mississippi State and Cincinnati last year. He he can open up the offense, his arm could lead Georgia to the promised land.

Purdy will get some Heisman talk this season with 19 returning starters and arguably the nation’s best running back at Iowa State. He threw for 322 yards against Oklahoma in the Big 12 title game last year but picks were a problem. He was also the MVP of the Fiesta Bowl win over Oregon.

Don’t sleep on UCF folks! Gabriel was last season’s FBS passing-average leader (357 yards per game) and has a ridiculous 61-11 TD-INT ratio with 11 300-yard passing games on his resume after two seasons as a starter.