The 2021 NBA Playoffs are heating up but some teams are already looking ahead. Let’s take a look at another full first-round mock draft. 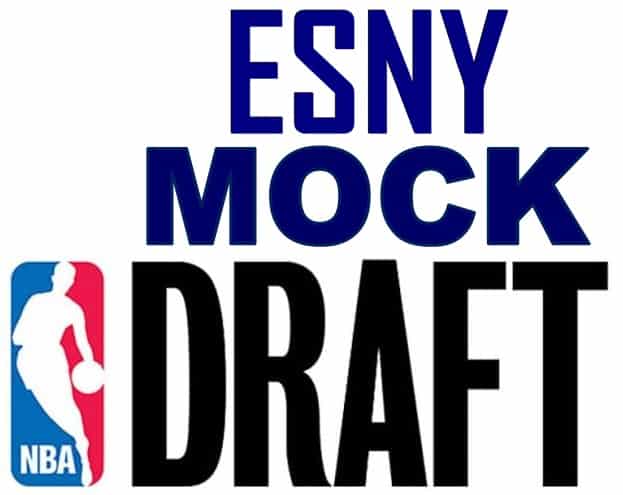 Cade Cunningham is going first overall. There isn’t much else to it.

The Pistons love their bigs and Evan Mobley is one to love. His offensive versatility and skillset are rare to see in a big man. He can help form a dangerous frontcourt with Jerami Grant.

The Magic have needed a point guard for umpteen years and Jalen Suggs is the perfect guy to fill that void. He’s as poised as they come and should be a perfect fit in Orlando.

The Thunder have a treasure chest of draft picks to use over the next few years. Jalen Green is a good way to start things off. He could be the perfect backcourt partner with Shai Gilgeous-Alexander.

The Cavaliers are stacking young talent. That’s what happens when you find yourself in the lottery year after year. Jonathan Kuminga is a high-upside wing who could develop into a fantastic scorer, but he has also flashed some passing ability as well.

We aren’t entirely sure that the Warriors are going to hold onto this pick, but if they do, Scottie Barnes is perfect. He’s a long defender who can cover multiple positions.

Give Nick Nurse a great defender and he will figure out how to make him effective. Keon Johnson’s offensive game isn’t nearly as polished as some of the other top-10 prospects here, but he has the upside to be a stud for whatever team drafts him.

Franz Wagner’s stock is rising and it’s no secret why. He can defend multiple positions, shoot the three, and facilitate as a secondary ballhandler.

The Kings are going to need to start beefing up the frontcourt and Kai Jones brings size with his 6-foot-11 frame.

This is one pick I’ve been consistent on from Mock Draft 1.0. The Pelicans need floor spacers for Zion Williamson and Corey Kispert is the best shooter in this draft class.

Forgive us for getting giddy about the possibility of Josh Giddey and LaMelo Ball teaming up. Sorry, that was awful, but don’t sleep on Giddey’s playmaking coming to Charlotte.

Although Jalen Johnson underwhelmed in his one season, his high points were exceptionally high. The Spurs are the kind of team that could help Johnson develop some consistency.

The Indiana Pacers could use a shot of life into the lineup and Davion Mitchell is exactly that. He’s a high-energy defender who should be able to make an immediate impact on that end of the floor.

Assuming Klay Thompson can get healthy, the Warriors don’t need to focus on scoring, but it can’t hurt to take Moses Moody. He’s a capable scorer and defender who should fit right in with Golden State.

The Washington Wizards fell short in the playoffs, but they were on the upswing in the second half of the season. James Bouknight can help shore up some of their scoring issues on the second unit.

Although Payton Pritchard flashed some promise in his rookie season, the Celtics could use more depth at the position. Who knows if Kemba Walker will ever be the same player he once was.

The Grizzlies are entering the team-building phase where it’s all about surrounding Ja Morant with the right players. Cam Thomas is one of the top scorers in the draft and should slot in as a contributor on the second unit immediately.

Like we said earlier, the Thunder have a boatload of picks in the next few years. They can afford to take a chance on Alperen Sengun and let him develop slowly.

The same logic from the above pick can be applied here for different reasons. Tom Thibodeau is not one to give rookies a role in his rotation without earning it. The Knicks can allow Usman Garuba to develop at his own pace with a mix of NBA and G League time.

Ziaire Williams was inconsistent in his one season with Stanford, putting up ugly shooting splits (37/29/80), but the Hawks should love his upside as a scoring wing.

Chris Duarte would be the second Knicks pick in this first round, but he is a guy who can come in and compete for a spot in the rotation. He should be able to defend at a high level and score just enough to be a net-positive on that end of the floor.

The Lakers need to add more shooting after this disappointing season. Jaden Springer is one of the best shooting guards in this class and should be a perfect fit with LeBron James and Anthony Davis.

Don’t put it past the Rockets to package picks No. 23 and 24 to move back up into the teens. But if they don’t Sharife Cooper would be a great pick, even if he is a bit undersized.

Greg Brown is going to be the second Texas big to go off the board in the first round. He has incredible athleticism and upside.

Rajon Rondo still has one year left on his deal, but that doesn’t mean the Clippers will ignore the point guard position. Tre Mann is as steady as they come.

Jeremiah Robinson-Earl is one of my favorite prospects in this entire class. Not necessarily because he has the upside of other guys, but because he is going to be a steal for a contender. He is incredibly versatile on both ends of the floor and comes from a winning program.

If the Nets are lacking in any one position, it’s at center. Isaiah Jackson and Kentucky struggled this year, but he still has incredible upside at the next level.

With Dwight Howard likely gone after the season, Philly is going to need a backup center. Charles Bassey is a rugged big man who can rebound and defend. Easy pick here.

Perhaps this feels a bit low for Ayo Dosunmu, but it would be a blessing in disguise. Dosunmu could be an excellent addition to Phoenix’s second unit.

Day’Ron Sharpe might fall into the second round, but the Jazz would be wise to take him with the final pick in the first round. He’s an exceptional passer for his size and he offers a changeup from what Rudy Gobert does on the floor.