Who would take home the hardware if the baseball season ended today? Here are our picks.

We’re two full months into the 2021 MLB season, roughly one-third of the way through the year. Some teams have been a terrific surprise while others have been disappointing.

So let’s jump into some picks for the big awards in baseball if the season ended today.

In the National League, a strong case can be made for Nick Castellanos, Kris Bryant, Ronald Acuna, Jr., and even Javier Baez. But Tatis has been the man. He enters June tied for the major league lead with 16 home runs and has been a daily highlight contributor — and has been on the injured list twice.

In the American League, Guerrero has been absolutely marvelous. He’s chasing a triple crown right now; he’s batting .323 with 16 home runs and 42 RBI. The Blue Jays haven’t played as well as some had expected, but Vladi has been the truth all year. Shohei Ohtani has a really strong case for MVP for what he’s doing on the mound and at the plate, but it’s Vladi right now for us.

OK, let’s go ahead and jump on the elephant in the room: no, we aren’t picking a New York ace for the Cy Young in either league right now. But hear us out.

Woodruff has been a life saver for the Brewers. He’s 4-2 but carries a 0.69 WHIP and 1.27 ERA with 83 strikeouts into June. He’s tied with Trevor Bauer for the major league lead with 10 quality starts through May. 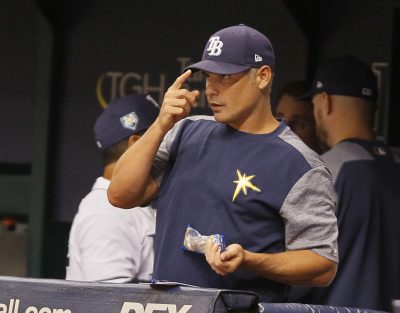 Manager of the Year

The battle for the top manager spot is heated right now. San Francisco, who were supposed to be near the bottom of the NL West, have the best record in the National League. And Luis Rojas has overcome a ridiculous list of injuries to keep the Mets in contention. But the Cubs just dominated the month of May and, in a year in which they were supposed to be sellers, are in first in the NL Centreal.

The call in the AL is actually relatively easy. Tampa lost a few really big pieces from their World Series team, including Blake Snell, and yet here they are with the best record in all of baseball (35-20). Cash continues to throw expectations in the trash and win games. It’s remarkable how good they continue to be in Tampa.

Mets fans will scream at us for not naming Francisco Lindor here, but Ozuna gets the nod easily. Not only did he break a couple fingers, putting him on the IL. But when he made the selfish decision to put his hands on a woman, he crossed the line. Atlanta will now likely be in the market for an outfielder to replace a significant part of their team because Ozuna decided to be a trash human being.

In the American League, the disappointment isn’t because of bad performance. To the contrary, both Trout and Robert were playing well. But injuries have robbed us — the fans — of seeing two incredible talents for a big part of the season. Injuries have been the dominant headline in the sport thus far and these two were heartbreaking.

Arizona signed Madison Bumgarner away from the rival Giants and some thought they were going to make things interesting in the West. Whelp, not so much. They’re 2-17 in their last 19 games and are sprinting to a top-three pick in next year’s draft. It’s been a brutal season in the desert and the fire sale may begin soon.

Minnesota, on the other hand, brought back most of their roster with the expectation that they would push the Chicago White Sox for the AL Central crown. Thus far, it’s been a disaster for the Twins. They’re 7-3 in their last 10 but start June nine games under .500 and 10.5 games behind Chicago in the division. They’re only a half-game out of the basement in the division.