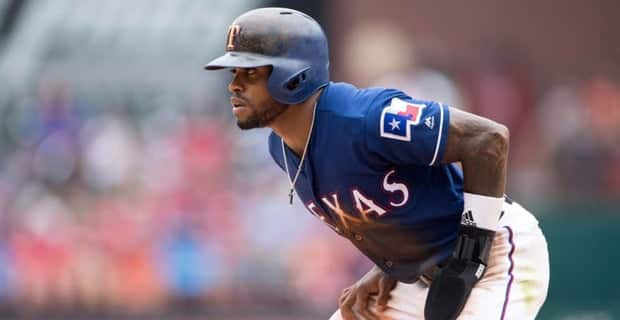 The Yankees are in need of outfield depth. Texas might be able to help them.

Injuries have depleted the Yankees’ outfield depth. Aaron Hicks, Giancarlo Stanton and Ryan LaMarre are all currently on the IL, forcing manager Aaron Boone to mix up his outfield too frequently of late.

According to a report from Ken Rosenthal of The Athletic, the Yankees have shown interest in Texas Rangers outfielder Delino DeShields, Jr.

DeShields, 28, signed a minor league deal with the Rangers before the season and has an opt out that he can use on June 1.

DeShields has hit .246/.326/.340 over 2,056 career plate appearances in the majors over six seasons with the Rangers and Indians. He has been successful on 109 of 140 stolen base attempts in his career and would bring some needed speed to the Yankees’ lineup.

The question is why would the Yankees trade for DeShields now if they could wait for him to opt out in June. But, if the Rangers are willing to take back another player who isn’t fitting into the Yankees’ rotation (see: Aaron Hicks or Miguel Andujar), a trade might kill two birds with one stone.