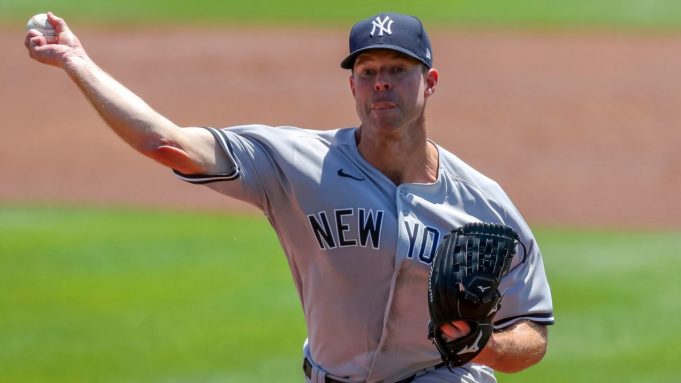 The reasons for Corey Kluber’s slow start to 2021 could be an ominous sign for the equally struggling New York Yankees.

The 2021 season isn’t even a month old and he’s only made three starts, but the New York Yankees already have a Corey Kluber problem.

Kluber left the game with a 4-3 lead too, but needed 77 pitches (50 strikes) to get through just four frames. The bullpen gave up the lead and Bo Bichette’s walk-off homer gave Toronto a 5-4 win and also the series.

All this to say the New York Yankees are now 5-7 on the year and, brace for impact, last in the AL East. The entire team is underachieving from top to bottom, and the starting pitching behind Gerrit Cole has been particularly weak.

This brings us back to Kluber who, even with his injury issues, one would expect to provide some consistency behind Cole.

He hasn’t, and something needs to change soon.

First things first, nobody expected Kluber would immediately return to prime Cy Young form in pinstripes. He missed most of 2019 with a broken forearm and pitched a single inning last year before injuring the teres major muscle in his throwing shoulder. Kluber is also 36 now, so he’s already pitching on borrowed time.

The rest of the starting pitching is equally questionable. Jameson Taillon has also struggled in two starts since undergoing a second Tommy John surgery two years ago. Jordan Montgomery has shown flashes of greatness, but not consistently enough to move out from under the “high upside” umbrella. And who even is the Yankees’ fifth starter anymore?

But here’s the difference. Montgomery’s upside isn’t going anywhere. Taillon, despite his struggles, still has shown good command of the zone. Moreover, Toronto had a .538 BABIP against him on Tuesday, and he has a mark of .348 through two starts. A lot of that can be traced to bad luck.

Kluber, meanwhile, just looks lost on the mound. He’s issuing more than three times as many BB/9 this year than he has for his career. His ERA ballooned to 6.10 following Wednesday’s start.

And for the cool price of $12 million, the New York Yankees have every right to feel some buyer’s remorse.

So what’s eating the man known as the Klubot? Does his software just need updating? Has he been running on Windows 95 this whole time? Or a super old version of Linux? Is that annoying Microsoft Office paper clip jamming his gears?

Jokes aside, there does seem to be a solution as to what’s going on with Kluber. Obviously, there’s a big rust factor. A 36-year-old pitcher simply doesn’t throw a combined 36.2 innings over two years and come back good as new. It’s going to take time and, for what it’s worth, Kluber owns a 4.00 ERA in March/April, and has always hit his stride in May.

Kluber also had a groundball rate (GB%) of 52.6% entering Wednesday’s start, so his signature two-seam sinker is still doing its job. Now, consider Kluber’s BABIP coming into Wednesday was an even .500. Like Taillon, he too has been burned by bad luck.

But here’s the twist with Kluber’s bad luck. Looking at FanGraphs, we can see his average fastball velocity is below 90 mph, specifically 89.8 mph, for the first time in his career. Even in his sole inning of work last year, he averaged 91.7 mph on his fastball.

We saw this with James Paxton last year before he injured his elbow, folks. If a pitcher’s velocity is down, he had better be able to either spin his fastball beautifully or have great stuff otherwise.

So far, in 2021, Kluber has not demonstrated the ability to do either, and it’s starting to become worrying.

In fairness to Kluber, he himself doesn’t seem worried about where he’s at so far. Per Lindsey Adler of The Athletic, he feels he’s “moving in the right direction.”

Corey Kluber said he feels the life/shape of his pitches are getting better, along with his location. Feels he's "moving in the right direction." Says he is "as frustrated as anybody" because "the mistakes I am making, I'm paying for." So for now… process: 👍, results:👎

Nobody knows Kluber better than the man himself, so we’re kind of forced to take him at his word. Pitchers are creatures of habit to an absolute fault and if something is off physically, they know.

The issue here is the New York Yankees signed Kluber to be an anchor behind Gerrit Cole, and he hasn’t performed as advertised yet. Even if he has three quality starts in a row after this, his pitches have been all over the place that fans and manager Aaron Boone alike will probably hold their breath at times. Given his age and recent arm troubles, the red flag of injury will always be a looming concern.

Anyway, enough rambling. The point is really simple. If Kluber is still just ramping his arm back up, then his bad luck is only accentuated by his teammates’ hitting struggles.

But if this is the new normal for Kluber, then pitching coach Matt Blake certainly has his work cut out for him.