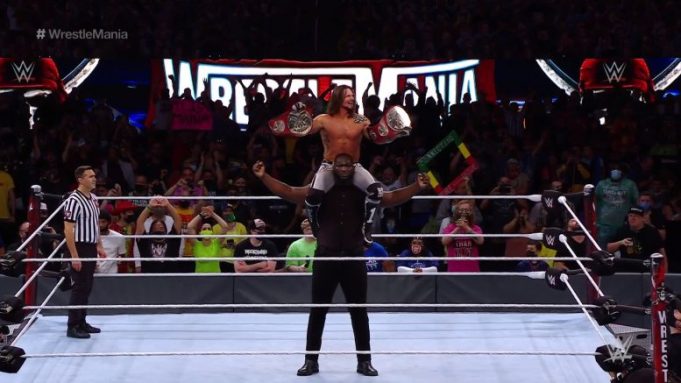 “The Phenomenal” AJ Styles won his first tag team championship in WWE when he and partner Omos defeated The New Day at WrestleMania 37.

Styles first debuted Omos alongside him back in October. The 7-foot-3 enforcer recently served as Akira Tozawa’s bodyguard, “The Big Ninja,” and also the bouncer for Shane McMahon’s Raw Underground gimmick. Now, he won his first championship in WWE while partnered with one of professional wrestling’s greatest talents. It’s also worth noting the win tonight made AJ Styles a grand slam champion.

As for the match, it really wasn’t anything special. The New Day, represented by Kofi Kingston and Xavier Woods, very much played the heels despite being the babyface team on paper. Both Woods and Kingston tossed Styles around while constantly taunting Omos.

But it was the big man who had the last laugh once he tagged in, and The New Day payed for it. Omos proved an absolutely brutal opponent and made mincemeat out of both Woods and Kingston. Styles then tagged back in and hit the Phenomenal Forearm while propelling off of Omos’ shoulders.

The future for this team, meanwhile, is a bit unclear. A rematch with The New Day will absolutely happen, but Monday Night Raw‘s tag team division is otherwise shallow. Moreover, will AJ Styles and Omos be babyfaces or heels?

There’s plenty more action to come from the first night of WrestleMania 37, so stay tuned to ESNY for more updates!