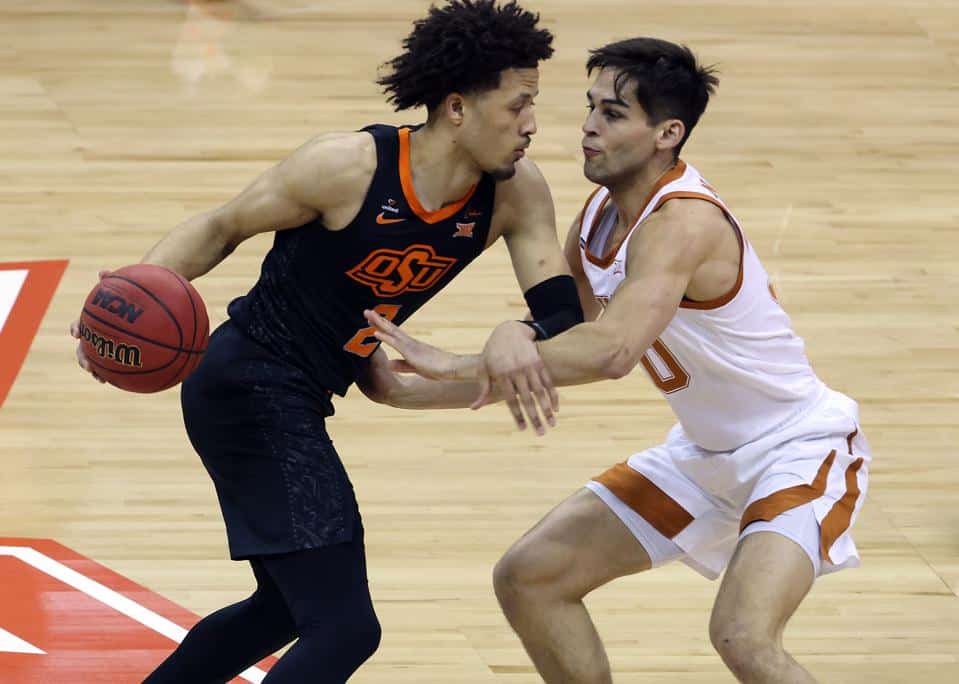 We’re at the Final Four, so how will college basketball’s best prospects slot out in the upcoming NBA Draft? ESNY has the answers.

Cade Cunningham is a special talent and the ‘Wolves need all the help they can get. It doesn’t matter that D’Angelo Russell and Malik Beasley are in the picture, not to mention reigning No. 1 pick Anthony Edwards. Cunningham can do it all on the court and Minnesota would be foolish to pass on him.

Suggs has been a March Madness star as an offensive catalyst for the Bulldogs. He’ll bring that electrifying talent to Houston as the Rockets go through a brutal rebuild. The good news is Suggs’ scoring boost will provide an immediate hope for the future.

Nearly 20 years after Big Ben Wallace, the Pistons can draft their next franchise center in Mobley. He’s on the skinnier side and could do to up his strength, but the upside speaks for itself. Still just 19 years old, he’s just the size the Pistons need to continue their rebuild.

The Magic are rebuilding yet again after trading Evan Fournier, Aaron Gordon, and Nikola Vucevic. Green can score in bunches and, at 19 years old, can become an immediate cornerstone in Orlando.

Cleveland has the guards, now it needs the size. Barnes’ 6-foot-9 frame comes with a defensive tenacity that’s already drawing comparisons to Draymond Green. He should develop well under coach JB Bickerstaff.

Kuminga is a young and versatile forward who should fit right in with the rebuilding Wizards. It’s hard to see what his role as a rookie would be, but he’s still just 18. Even if it means sitting on the bench for a year or so, he’ll find his way in DC.

Moody is confident in the midrange and reliable from three despite going a bit cold in the tournament. If Kyle Lowry isn’t re-signed, look for Moody to get some quality minutes at shooting guard as Fred VanVleet shifts to the point.

The Magic got their scorer, now they’ll shore up the wing with Kispert. He’s averaged 17.2 points per game in the tournament and is probably coach Mark Few’s best player in over a decade. His prowess for scoring both in traffic and in range gives Orlando an interesting weapon.

Johnson’s still a raw talent, but his athleticism shows his upside. He can dunk and, on a good day, be a top scorer. OKC is rebuilding, and his defense could be enough for him to earn minutes as he develops.

One can’t help but watch Wagner and think he was born to be a Pacer. He’s spectacular in catch-and-shoot and has the size to be a force on the inside too. In Indy, he can be a productive wing on both sides of the court.

Lonzo Ball is on the way out, so the Pelicans have a hole at guard. Mitchell can be a force from long range and is a good defender even as he continues to develop at the point.

The Kings have a solid young core and could use some more defense on the wing. Williams has both the upside and the athleticism to get some bench minutes in Sacramento while continuing to work on his scoring.

Memphis has two franchise talents in Ja Morant and Jaren Jackson Jr., and now they add a third in the freshman Tiger. Johnson can be streaky from three, but is fearless with the ball in his hands. He’ll help the Grizzlies keep moving forward.

Even with Klay Thompson’s return next season, the Warriors will continue to add guard depth. Bouknight is a budding 2-guard who works well in the mid-range, though his threes need work. Playing under the tutelage of both Steph Curry and coach Steve Kerr will only help him in his young career.

The Boston Celtics get the steal of the draft in Jones who, though raw, is a dominant young big in the making. Moreover, he fills the team’s gaping hole at center, even if it means coming off the bench for a year or two.

Nate McMillan is the new sheriff in town and he loves athletic guards more than Tony Stark loved cheeseburgers. Christopher has an above average handle and already does a good job of limiting his turnovers. With John Collins a likely departure in restricted free agency, Christopher gives the Hawks some high-upside scoring potential and support to Trae Young.

The Knicks can boost their three-point numbers in adding Springer who, though not best known for his shooting, was 43.5% from long range for the Vols. Springer can also work his way to being a reliable 2-guard, especially as the roster under coach Tom Thibodeau begins to take shape.

Oklahoma City adds some high-ceiling size in Prkačin, who’s still only 18 and a budding star in Croatia. He’ll need to bulk up and work on his back-to-the-basket game, maybe even staying overseas for a year or two to develop. If not, then he may be able to follow teammate Aleksej Pokusevski and show enough finesse at times to earn some quality minutes.

Charlotte could be on the lookout for its next franchise guard and Dosunmu would be a fantastic fit here. He’s big and athletic at 6-foot-5, 200 pounds, and is particularly aggressive in transition. He has the range too, though his size often allows him to drive the lane with ease.

Kinsey has a long, lean build at 6-foot-5, 185 pounds, and scored in bunches for the Thundering Herd last year. He’ll need to bulk up and learn how to operate outside of a college offense, so coaching will be key for him. There’s none better at that than Gregg Popovich, whose guidance and patience will allow for Kinsey to have a smooth transition to the pros.

Assuming the Knicks keep Julius Randle around long-term, Johnson is a great young forward to play behind him. Furthermore, he gives the Knicks some athletic size and also an insurance policy in case Obi Toppin continues to struggle next year.

Big and athletic point guards are all the rage in the NBA, and Giddey fits that mold. He’s got length at 6-foot-8, 205 pounds and showed promise as a playmaker in his short time with Adelaide. He’s also still just 18 years old, so the Nuggets can afford to take their time with him.

Houston’s embarrassment of draft riches continues as they draft Brown, who provides size and strength alongside Christian Wood. He’s unlikely to be much of a factor on offense, but he can be a force in the paint on both sides of the court. Oh, and he will win a Slam Dunk Contest at some point.

Duke can run the point, but is probably better suited as a 2-guard in the NBA. He has decent range and playing and learning alongside LeBron James will only help him in his young career.

Houston continues to build up their guard depth with Agbaji, who creates well off the dribble and shot over 38% from three for the Jayhawks last season. He could get some quality minutes for the Rockets too as they figure out life after James Harden.

Ayayi is a long and athletic combo guard who can shoot the three and is also a competent defender. Regardless of what Kawhi Leonard does in free agency, the young Frenchman should get some playing time in LA either as a bench spark or pest.

Boston struggled with consistency in his one year with the Wildcats, but we’ve seen both the range and the upside. Heading to the City of Brotherly Love and learning under Doc Rivers is the best fit for him if he’s still on the board this late.

Brooklyn fills the void left by trading Jarrett Allen and picks up Bassey, who already has an NBA body at 6-foot-11, 235 pounds. He’ll need a year to adjust to the NBA, but it’s just a matter of time before he’s the starting big man at the Barclays Center.

Butler could wind up being a good value pick for the Suns here. His quickness is such that he’s easy to miss if you blink, and his energy is what these young Suns need to keep chugging along for years to come. Even if his future is as a reserve, Monty Williams’ coaching will move him in the right direction.

We’ve all loved Utah’s energy this season, and they’ll keep it up in drafting Hyland. He’s in desperate need of a trip to the weight room, but his determination and quickness make him a prime fit in Quin Snyder’s offense.