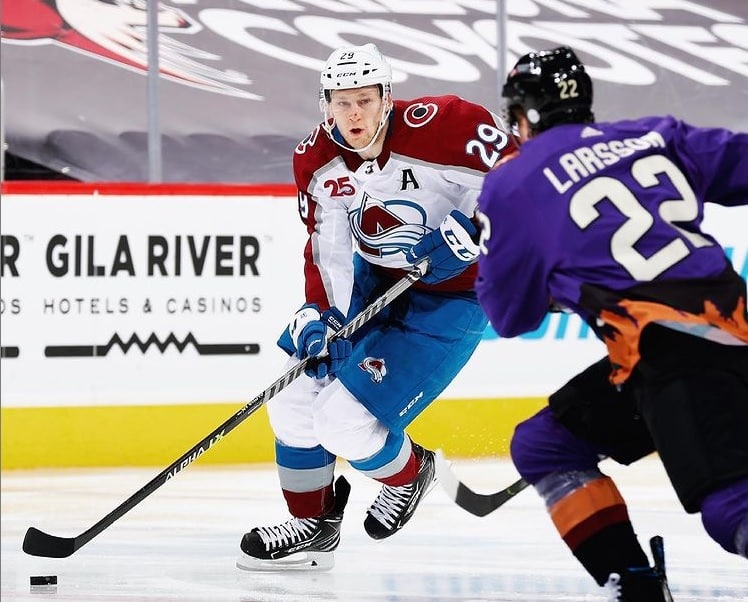 Just as things in the NHL were getting interesting, COVID-19 scares and outbreaks popped up in several places to ruin everyone’s fun.

All of these teams are in playoff races, so not seeing them in action as often as they should’ve been was far from enjoyable.

Even so, let’s take a look at how they along with the rest of the league did this past week in this update of our NHL power rankings.

In case you were wondering, the Sabres still haven’t won a game and their losing streak is now at 16. Yes, this is historically bad.

After a pretty decent week, the Red Wings have gone back to their losing ways. Most recently, they’ve gone 0-3 while being outscored 1-12 (two of these losses were shutouts).

The Ducks went 0-3 this past week and were outscored 4-10 over that span. We’re almost at the trade deadline, and Anaheim still can’t score goals.

Speaking of the deadline, Ducks fans should start coming to terms with the fact that Rickard Rakell might be as good as gone.

The New Jersey Devils still aren’t a very good team, especially at home, but it’s nice to see that they’re getting contributions from both the veterans and the youngsters.

One of said veterans who needs to be discussed? Kyle Palmieri. The 30-year-old veteran alternate captain might not be around much longer.

The main point of discussion regarding the Sharks is Patrick Marleau and his status as the trade deadline approaches.

The situation is particularly interesting considering the fact that he’s set to break Gordie Howe’s record of most games played all time sooner rather than later.

This was the Senators’ best week in some time. They didn’t lose in regulation and outscored opponents 7-5.

Something that made their week even more special? Goaltender Filip Gustavsson made his NHL debut on Wednesday, making 35 saves and leading his team to a 2-1 win against the Calgary Flames. Could he actually be the netminder of the future?

The up-and-down Stars are at it again.

They’re coming off a decent week, something fans should be excited about. Another factor to consider that might invoke some excitement is the fact that no team in the league has played fewer games than the Stars this season.

This could mean a late playoff push aided by the return of Ben Bishop and Tyler Seguin.

If we’re going to talk about late playoff pushes, the Predators must be in the conversation. It’s unlikely, but far from impossible.

The Predators seem to have turned things around and have been getting some winning streaks going lately. This past week was no different: they went 3-1 while outscoring opponents 13-6.

Granted, two of these wins were back-to-back shutouts against the Red Wings, but a win is a win. Sometimes games against the worst teams are the most important.

Don’t look now, but the Flyers are on the second-worst losing streak in the league. We know, they caught fire in the second half of last season and wound up becoming one of the best teams in the league.

It’s hard to buy into the prediction they’re going to do it again this season, especially with the struggles of crucial players such as goalie Carter Hart. At this rate, it’ll be a miracle if head coach Alain Vigneault even makes it out of the season.

Just as the Canucks were getting things going, they hit a bump in the road. They lost all three games they played this past week and were outscored 5-14. At least they came up with a point in one of those losses.

Lucky for the Canucks, the Flames had it rough this week, as well. They went 0-3 and were outscored 2-7. Maybe new coach Darryl Sutter hasn’t completely cured their consistency-related issues.

The Blue Jackets didn’t have a particularly great week, but they’re back in the playoff race.

Max Domi is heating up just in time and it’s relieving to see him score after his terribly slow start to the season. It looks like Columbus won’t be selling at the deadline, after all.

The past week for the Kings went pretty much the same as last week. They went 1-2 once again and were outscored 6-7.

The playoffs are becoming a dream, but it’s nice to see some of the veterans as well as young goalie Cal Petersen play as well as they have been.

The Coyotes haven’t done too well this season, but if they keep having weeks like the one that just passed and if the St. Louis Blues continue to struggle, the playoffs could become a reality for them.

After a recent rough stretch, the Blackhawks had a much-needed week in which they went 2-1.

Winger MacKenzie Entwistle made his NHL debut on Tuesday and Kirby Dach could be set to return much sooner than expected after undergoing surgery on his wrist before the season began.

Getting some fresh bodies into the lineup just in time for a second-half playoff push is crucial.

The New York Rangers are currently one of the most intriguing teams to watch. After a rough start to the season marked by inconsistent goaltending and an anemic offense, the Rangers are clicking on all cylinders.

They do have Mika Zibanejad to thank for much of this success, as he’s getting hot again at the right time, scoring two hat-tricks in back-to-back games against the Flyers.

To make the situation even more interesting, goaltender Igor Shesterkin returned on Thursday after missing 10 straight games and top prospect Vitali Kravtsov is expected to make his NHL debut as soon as next week.

The Rangers have climbed to fifth in division, thanks in part to Philadelphia’s struggles, and are four points out of a playoff spot. The Boston Bruins, who sit in fourth, have some games in hand, but no one should count this young Rangers team out.

The Blues were able to end their five-game losing streak, but they still don’t look too hot. They won one game this past week, and it came against one of the worst teams in the league, the Sharks.

Other than that, they scored a grand total of one goal. If the Blues don’t turn this around, they can kiss the playoffs goodbye.

The Canadiens played one game this week- a 5-4 shootout victory against the Canucks on Saturday- before seeing their games through Sunday be postponed.

Forwards Joel Armia and Jesperi Kotkaniemi were also added to the NHL’s COVID-19 protocol list. The Canadiens will look to get a hot streak going once they do return to play in order to stay afloat.

Like the Canadiens, the Bruins played just one game this past week. They saw two of their games postponed, but returned to play on Thursday against the New York Islanders, when they blew an early 2-0 lead and lost in overtime.

They were, however, without eight of their players and will hope to get them back in order to maintain their current position in the standings.

The Panthers are still great, but they’ve dropped in our power rankings after losing three in a row. Here’s to hoping captain Aleksander Barkov’s injury isn’t serious; they aren’t the same without him.

Another team affected by COVID-19, the Oilers played just one game this week. They saw their games against the Canadiens postponed after some of Montreal’s players were placed on the protocol list.

Their win was a 4-2 victory against the Winnipeg Jets and the Oilers are sitting on a three-game winning streak. The hope is that the long layoff hasn’t killed their momentum.

Vegas is another elite team coming out of an off week. We’ll take the time to show some love to Alex Tuch, who’s been lighting the lamp more frequently than practically anyone.

He’s been inconsistent in the past but that isn’t the case now and his teammates and coaching staff will hope he can stay this hot throughout the second half of the season as well as the playoffs.

The Penguins just keep on rolling: they didn’t lose a game this week and outscored opponents 13-5.

However, things are only going to get more difficult from here.

The team was already plagued with injuries after Teddy Blueger, Evgeni Malkin, and Jason Zucker went down. We can now add Kasperi Kapanen and Brandon Tanev to that list, both of whom are expected to miss quite some time.

The Penguins are comfortable in the standings right now, but Sidney Crosby is going to have to continue to carry his team through this upcoming tough stretch. Pittsburgh will have to be active at the deadline in order to get the captain some help.

Who would’ve thought Kyle Connor would become one of the best goal-scorers in the NHL? The 24-year-old is already at 16 in 33 games and deserves credit for being a key part of this successful team.

The question is, can he keep it up in the second half of the season and beyond?

Here we have another team that had a shortened week. The Capitals played just twice since last Saturday, going 1-1 over that span while getting outscored 5-6. They remain a top team in the league and a titan coming out of the East.

The Hurricanes had a nice bounce-back week, going 2-0-1 while outscoring opponents 9-6.

By opponents we mean the Blue Jackets, of course. The Hurricanes have played their last four games against Columbus, and we’re looking forward to seeing them go up against some different teams this week.

The Wild were outscored 7-9 this past week but still went 3-1 and are on a three-game winning streak. This is a team that’s clearly able to come up with all kinds of victories.

Let’s show some love to Kirill Kaprizov and Kaapo Kähkönen, who have been two of the best rookies in the league this season and are emerging as key pieces that the Wild must build around.

The Maple Leafs’ strange situation regarding their schedule hasn’t disappeared. They played twice this week but won both games, outscoring the Flames and Senators 5-2.

It will be interesting to see if the choppiness of their schedule has any impact on the team moving forward.

The Islanders are unstoppable. Even when they lose a game or two, they immediately get another winning streak going. They went 3-0 this past week while outscoring their opponents 12-5.

Although they’ve been rolling, we can’t forget the fact that the team is without their captain and one of their best players, Anders Lee. He will need to be replaced at the deadline, so look for the Islanders to be in the news quite soon.

What is there to say? The defending champs look like defending champs and seeing them lose more than one game a week is a rarity. It’s still unfathomable that they’re doing this without their best player, Nikita Kucherov.

Side note: it looks increasingly likely that Andrei Vasilevskiy will be the guy to take home the Vezina Trophy this season when it’s all said and done.

It took far too long, but the Avalanche are healthy and clicking on all cylinders.

We’ve talked about how great Philipp Grubauer has been, but it’s a point that must be reiterated. He’s Vezina Trophy-good.

The Avs also led the league in scoring this past week, putting up 20 goals in four games. They look like true contenders again. Monitoring their activity at the deadline will be worth it.