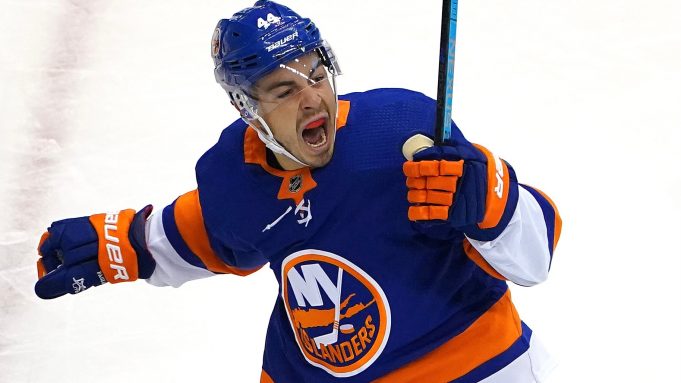 In a close home opener, the Isles were able to bounce back with a win over Boston..

The first of eight meetings between the New York Islanders and Boston Bruins came on Martin Luther King Day as the Islanders’ home opener.

Coming off a terrible loss to the New York Rangers on Saturday – a game that saw starting goaltender Semyon Varlamov injured during warmups – the Islanders looked to move forward against the incredibly dangerous Bruins.

Varlamov was healthy enough to return to the lineup, helping the Isles’ odds.

The Islanders started off the game as the hotter team, dominating possession and generating some great scoring chances.

The third line, that remained unchanged since the start of the season, was the team’s most dominant line with two very strong shifts.

Less than eight minutes in, Brandon Carlo was penalized for cross-checking Matt Martin. This gave us our first look of the game at the Islanders’ power play, which had been disastrous to start off the season.

The Bruins are one of the best teams in the league on the penalty kill and they put that strength on display here, but this proved to be another awful power play by the Islanders.

The momentum seemed to shift after the power play with the Bruins winning battles for the puck and getting into the Islanders’ zone. With 5:01 left in the period, shots were in favor of Boston 8-2.

The Islanders had trouble with the puck in the neutral zone, something that allowed the Bruins to have so many scoring chances.

With just over three minutes left, Casey Cizikas was booked for interference. The Islanders had been successful on the penalty kill, so far, and this was no different, allowing just one shot while short-handed.

The successful kill gave them some momentum, allowing them to have two great scoring chances.

A strong start to the period didn’t last for the Islanders, who would need to be much better moving forward in order to win.

2nd period: Well, this is intense

Adam Pelech was called for holding less than a minute into the second period, putting the Islanders on the penalty kill for the second time.

The Islanders were lucky when Brett Ritchie was booked 50 seconds into the power play for slashing. Neither team was able to score on the four-on-four or their respective power plays.

The second period got off to a much quicker start by both teams.

The Islanders would go on to be called for another penalty for having too many men on the ice. It was served by Jordan Eberle.

As Isles announcer Butch Goring noted during the broadcast, a significant factor to the Islanders’ success on the penalty kill has been that they’ve been able to win faceoffs, which eats several seconds off the clock.

The already-physical game grew even more so this period, highlighted by Scott Mayfield‘s big hit on Chris Wagner.

15:45 in, the Islanders would have their second power play of the night after Craig Smith tripped Varlamov in his crease.

This was another bad power play for the Islanders, whose passing struggles continued. They even almost conceded a short-handed goal had the Bruins not whiffed on the puck.

The Islanders had another huge scoring chance with about half a minute left when Mayfield made a brilliant pass down the ice to Jean-Gabriel Pageau, but Pageau wasn’t able to get his shot on target.

Pageau had the Islanders’ first big scoring chance of the third period, too, but shot it high. Finishing had been a recurring issue for the Isles this game.

Brad Marchand was sent to the box for cross-checking 1:17 into the period, sending the Islanders to the power play again. Even though they could not score, this was their best power play of the night.

They were able to keep the puck in Boston’s zone for a good chunk of time and generated some scoring chances. The Islanders were much less sloppy this period, making the Bruins labor while trying to exit their own zone.

14:17 in, Matt Grzelcyk and Eberle were sent off for interference and tripping, respectively, so the two teams would go on to play four-on-four hockey. Grzelcyk appeared to be shaken up on the play, heading to the locker room immediately after.

These two minutes were very uneventful and both teams emerged scoreless.

Almost halfway through, Josh Bailey made a brilliant pass to Anthony Beauvillier who found himself one-on-one with Tuukka Rask, but he couldn’t get the puck past the rock-solid goalie.

This was another balanced but high-intensity period for both teams.

The Islanders were finally able to get one in with 4:09 left. Pageau, who had had some big scoring chances, made a great play in front of the net to bat a puck shot by Pelech past Rask. This was definitely a relief with the clock winding down.

Immediately after the Islanders scored, Charlie McAvoy was sent to the box, but this was another bad power play for the Islanders. The Bruins went on to empty the net and did have some very close scoring chances, but Varlamov stood tall.

To the relief of the team and the fanbase, the Islanders were able to snap their goal-less streak and come up with a big win against a dangerous Boston team. It’s worth noting that the Bruins have yet to score an even-strength goal this season.

This goal was important for several reasons. It was Pageau’s first goal since game three of the Eastern Conference Final, it was the game-winning goal, and it snapped a lengthy (and potentially detrimental) goal-less streak.

The Islanders will look to build on this goal and their overall performance in this game when they take on the New Jersey Devils on Thursday.

Player of the game: Semyon Varlamov

Varlamov was the Islanders’ best player and it isn’t close. “Varly” made 27 saves on 27 shots, many of which were dangerous and tough to make.

What makes his performance even more impressive is that he did all this after suffering a tough injury just two days prior and being forced to miss a game.

Another reason he has to be given this honor? He set a new franchise record. Varlamov now holds New York’s record for longest shutout streak to begin a season, breaking Rick DiPietro’s previous record of 115:35.

Oh yeah, and Varlamov’s streak is still active. It’s going to be interesting to see how long he can keep it running.