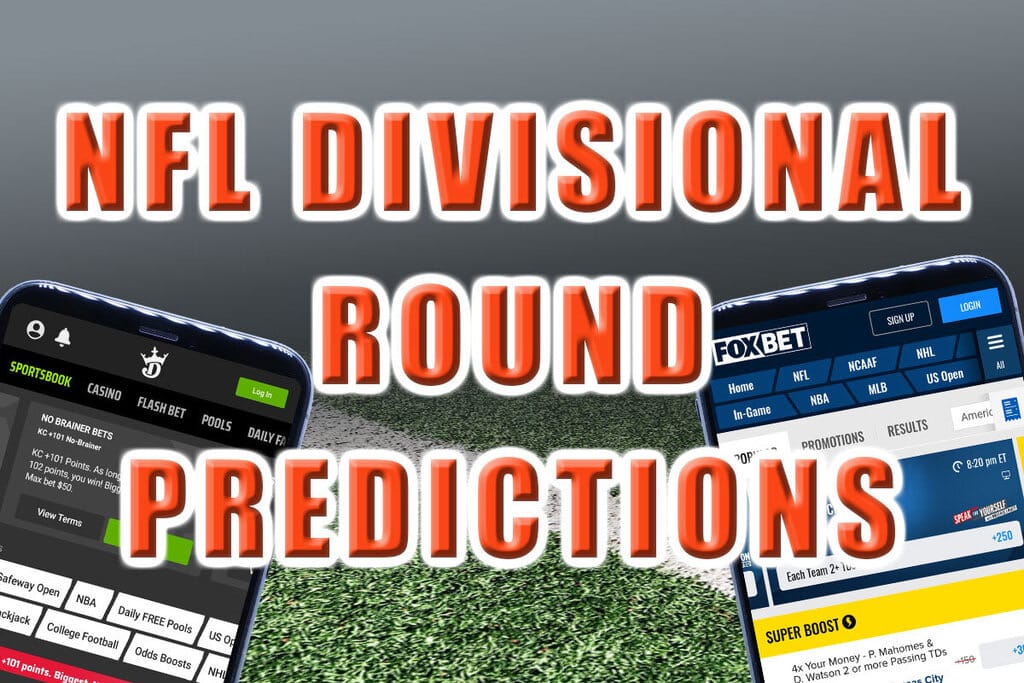 The NFL Playoffs continue this weekend with four intriguing Divisional Round matchups. The action kicks off at Lambeau Field late Saturday afternoon and wraps up on Sunday night in New Orleans. It should be a wild weekend of football filled with memorable performances and classic games, and it will most certainly be a weekend filled heavy football betting action.

With plenty of ways to wager, let’s dive into how to bet the NFL Divisional Round matchups as well as get into the odds, picks and betting predictions for this weekend’s games.

Click here to get 25-1 odds on any NFL Divisional Round matchup with FanDuel Sportsbook.

Note: NFL Divisional Round odds are courtesy of DraftKings Sportsbook.

The Divisional Round kicks off on Saturday afternoon at what is expected to be a chilly Lambeau Field with temperatures hovering around the freezing mark.

The Rams showed why it has the NFL’s top-ranked defense in its win over Seattle last weekend, but pulling off another upset this time around figures to be a far more difficult task.

Not only have the Packers been an outstanding ATS pick at home throughout Aaron Rodgers’ career (91-64-5 ATS), they’ve also been a good bet during the postseason (11-6-1 ATS) and profitable with more than 12 days off (10-5-1 ATS).

Making matters worse for the Rams is the expected weather forecast. Led by Rodgers, the Packers have been a remarkable 28-10-1 ATS in games with temperatures at 32 degrees or below, Jared Goff, on the other hand, has struggled in some conditions.

Here’s his stat line his two career starts made with temperatures of 32 degrees or less:

That’s brutal. Throw in that he’s playing this game with an injured thumb that currently has a pin in it, and, well, I’m willing to ignore that No. 1 seeds are just 13-22-1 ATS in the Divisional Round since the 2003 season. I’ll bet on Rodgers and the well-rested Packers to prevail and cover.

Register with DraftKings Sportsbook to get 100-1 odds on any NFL Divisional Round game by clicking here.

No team in the NFL has had more success as an underdog recently than the Ravens. Over their last 11 games in this role, the Ravens are a staggering 10-1 ATS, so fans and bettors shouldn’t be deterred by the short spread ahead of this one.

You probably see where I’m heading with this pick, but I’d also like to first note that Lamar Jackson is 14-5 ATS on the road as a starting quarterback and 4-1 ATS as a road underdog.

It’s not all bad for the Bills, however, as they are 18-3 straight up as a favorite with Josh Allen at quarterback, including 10-1 this season.

I’m not going so far as to take the Ravens outright, but at +3, I’m willing to side with the road dog in this spot.

The Chiefs are the biggest favorite weekend and it’s not hard to see why. This team has lost just one game it has tried to win dating back to last fall.

As noted above, top seeds have been a poor bet in the Divisional Round over the last 18 postseasons, but this is the Chiefs we’re talking about, right? Well, it is worth noting that double-digit home favorites of at least 10+ points are 12-6 ATS in the postseason since ’03, so that trend certainly bodes well for Kansas City. Meanwhile, the Chiefs have won 21 of their last 22 games as a favorite.

There is one small problem, however, and it’s that the Chiefs have been an ATS nightmare throughout the second half of the 2020 season. In fact, with some books offering the Chiefs at -3 over New Orleans back in Week 15, this is a team that hasn’t covered a game since a 35-9 win over the Jets back on Nov. 1. That’s a stretch of eight straight games without a cover (0-7-1 ATS).

Cleveland should be able to effectively run the football and hang around in this one for awhile, but I think we’ll see a critical Baker Mayfield turnover late that leads to Kansas City pulling away for the cover.

It’s worth noting the Saints are red-hot as a favorite, covering seven of eight contests.

New Orleans has gotten the better of the Bucs twice already this season, but they always say it’s hard to beat the same team three times in a season, and I suspect we will see that idea play out on Sunday night.

It’s worth noting that road underdogs are 12-6 ATS in postseason games featuring two division opponents and 3-1-1 ATS as underdogs of three points or less.

Tom Brady, you may have heard, is a pretty good postseason quarterback, and I think he gets his revenge and sends the Saints into another long offseason prompted by postseason heartache.

Click here to get 25-1 odds on any NFL Divisional Round matchup with FanDuel Sportsbook.