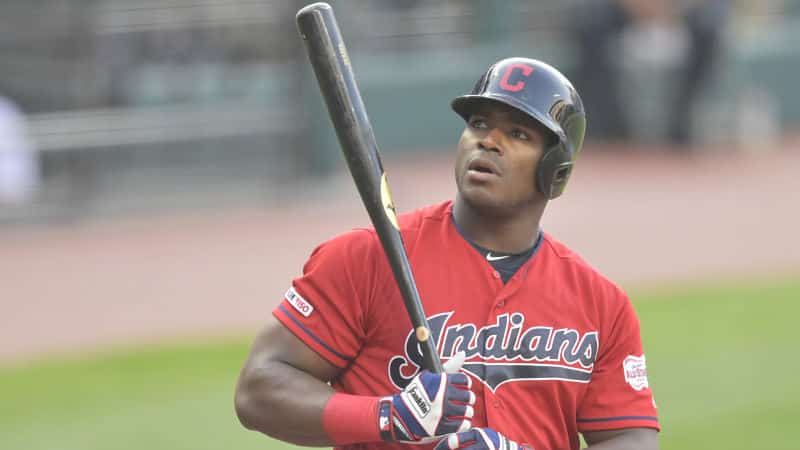 The Yankees are reportedly one of several teams interested in “The Wild Horse.”

According to Mark Feinsand, the New York Yankees are one of the teams expressing an interest in veteran outfielder Yasiel Puig.

Re-signing infielder DJ LeMahieu is logically the Yankees’ number one offseason priority and adding pitchers to both the rotation and bullpen should be as well, but bolstering the lineup even further might follow.

Puig, 30, made a name for himself with the Los Angeles Dodgers. The Cuban right fielder last played for the Cleveland Indians in 2019 after the Reds traded him north in the deal that sent Trevor Bauer to Cincinnati.

He failed to sign for the 2020 season after reportedly having a deal in place with the Atlanta Braves in July only to test positive for COVID-19, bringing that plan to an end.

Puig has played all three outfield positions but has spent most of his career in right field, where he has a 28 DRS and 10.6 UZR.

At first glance, many would consider this signing to be puzzling and unnecessary. However, when taking into account several different factors, recruiting such a player as Puig might not be a bad idea at all.

To clarify: if the Yankees do sign Puig, barring a stretch in which he plays unbelievable baseball, he’ll be a depth piece.

At full strength, it seems that the Yankees’ outfield moving forward would see Aaron Judge in right field, Aaron Hicks in center, and Clint Frazier in left.

The organization has clarified that Giancarlo Stanton will likely be used as a DH most of the time from now on in order to keep him as healthy as possible. Having a guy like Puig as a fourth outfielder is nothing to complain about.

This does mean, however, that the Yankees would have to choose between Puig and Brett Gardner. Gardner is a fan favorite and has spent his entire career in pinstripes but, at this point in time, Puig is younger and an overall better player.

This move would also make Mike Tauchman expendable and allows the Yankees to explore ways to flip Tauchman for assets.

Depth is especially important to a team like the Yankees whose players are almost always hurt. Their outfielders, in particular, are quite injury-prone, so having an extra player who is fully capable of starting every day on hand is crucial.

Bad hitting, not pitching, is costing the team in the playoffs

The current state of the Yankees’ pitching staff is pretty dreadful, to say the least. Both the rotation and the bullpen must be addressed during this offseason or the team is destined for failure in 2021.

However, many tend to forget that hitters going cold, not bad pitching, has been costing the Yankees in the playoffs over the past several years.

Not only does Puig have a great deal of playoff experience under his belt from his time with the Los Angeles Dodgers, but he’s also played quite well in October.

Having a successful playoff veteran on a team that struggles to hit in the postseason could end up making a difference for the Yankees.

He’d be cheap (and he’s good at baseball)

COVID-19 has caused MLB teams to tighten their purse strings. Players are already going to come cheaper than usual and the fact that Puig is still unsigned is a good indication that he won’t be expensive.

Anyways, the Yankees organization has expressed that it’ll be working on a budget this offseason, so they wouldn’t add Puig if they deem him to be costly.

Getting a player of Puig’s caliber, someone who can hit and run but is also a good and versatile defender, on a cheap, short-term deal would bolster an already-great Yankees lineup.

Signing Puig during this offseason would be a bargain for the Yankees. They’d be getting a former All-Star who’s an overall very solid player and using him to add depth to their stacked squad.

Yes, adding pitching and re-signing LeMahieu are priorities, as they should be, but mentions of the Yankees being interested in Puig shouldn’t be overlooked because he can truly end up being a game changer in that lineup.