The New York Yankees would love to rebound in 2021. Setting these New Year’s Resolutions should make for a great year in The Bronx.

Seriously, let’s not sugarcoat it. The COVID-19 pandemic has been an unwelcome guest to the point where we don’t need to rehash all of its negative effects. We all know the damage this virus inflicted.

Simply put, I would rather watch Rocky V, The Postman, and Season 5 of Cheers on an endless loop for a week than live through 2020 again. Except for the birth of my daughter last month, 2020 can go…let’s keep it PG.

Moreover, 2020 was a year to forget for the New York Yankees too. In a condensed 60-game season, the team struggled with injuries (again). Aaron Judge and Giancarlo Stanton missed significant time (again). Except for Gerrit Cole, the pitching proved unpredictable (again).

Now, with DJ LeMahieu and Masahiro Tanaka’s respective free agencies, the Bronx Bombers’ prospects for 2021 are anything but clear. With the new year dawning, it’s time for the Yankees to have a reality check and get back to how they really run the show.

And how should general manager Brian Cashman turn over this new leaf? Well, starting simple with some New Year’s resolutions is a good idea. 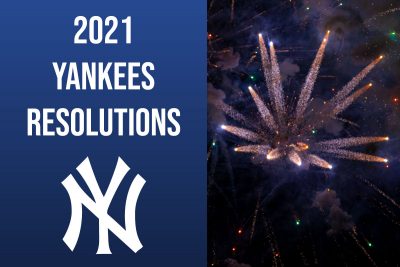 I know, I know. This isn’t so much a New Year’s resolution as it is something the New York Yankees have needed to do for years on end.

But hear me out. Why not kick off the new year with a bang by giving the fans something to look forward to at some point in 2021? Number 21 simply isn’t worn by Yankees players anymore. LaTroy Hawkins wore it for a hot minute in 2008 and then switched to 22 when the boo-birds’ cries reached Hitchcockian levels.

Since then, the number has sat in the attic collecting dust next to the treadmill your dad bought back in ’98 and used for 15 minutes. Why not bring it out and give it the sendoff it deserves?

Plus, we all know Paul O’Neill deserves it. He was a loyal Yankees soldier for nine years and hit .303 in pinstripes. He won four World Series rings and truly lived up to the nickname of The Warrior.

Now, O’Neill continues to charm fans’ hearts as a color commentator for YES Network. His calling games live from his basement in Cincinnati last season was an absolute riot. It isn’t enough that he’s still with the team as a broadcaster as well as a fixture at Old Timers’ Day. The Yankees need to do what should have been done years ago: make it official and retire his number 21.

Just when we think the New York Yankees are about to finally win their first World Series since 2009, there’s a setback. More often than not, it’s a star player getting injured combined with a cold streak for the ages. After the Yankees had over 30 separate injured list stints in 2019, the training staff was revamped and everyone looked to 2020 as a rebirth.

Except it wasn’t. Stanton and Judge each missed over a month of action and the Yankees endured a brutal 5-15 stretch without their star bats. Throughout the cold streak, first baseman Luke Voit played while visibly uncomfortable with plantar fasciitis.

And in 2021, the Yankees are going to make like millions of people across the world and vow to get in shape. It’s the first full season with new trainer Eric Cressey, and he can be more involved than he was last season. By fully implementing his methods, the Yankees can finally get healthy and dominant like they’re supposed to be.

And maybe, just maybe, we can limit the Yankee Stadium garlic fries to Saturday and Sunday games. Those things are both delicious and dangerous.

I think I speak for all Yankees fans, from the bleachers to the Legends seats, when I say this has been a frustrating offseason. Every day that DJ LeMahieu goes un-signed induces more and more anxiety. With owner Hal Steinbrenner bemoaning how New York apparently lost more money than any other team, the Yankees aren’t likely to spend big this offseason.

This needs only one true response: FEH!

Look, we get it. The lack of fans in attendance was a financial sledgehammer for MLB teams in 2020. There is no doubt in anyone’s mind that the Yankees, big spenders though they are, were hit in the wallet quite badly.

But even then, the team is still the New York Yankees. Forbes valued the franchise as the most valuable in MLB at $5 billion. Coming in second were the Los Angeles Dodgers at $3.4 billion, so the gap isn’t exactly close. From sales to advertising to owning their own TV network, the New York Yankees brand is strong.

Now, consider Forbes listed the Yankees as earning $287 million in gate receipts in 2019. That’s a lot to lose in a year, but even then New York is still worth well over $4 billion.

Now that I’ve nerded out with numbers, let’s talk leftover Christmas turkey. These are still the New York effing Yankees we’re talking about. If penny-pinching costs them LeMahieu, Masahiro Tanaka, or any other free agent, then any shortcomings in 2021 can be considered self-inflicted.

The Yankees spend big. Always have, always will. As we turn the calendar to the new year, it’s time for them to remember who they are.