There are some close calls, but of all the great third basemen in New York Yankees history, who are the best?

The New York Yankees have had fantastic players man the hot corner in several of the team’s different eras. Many of the best are neck and neck, but let’s take a look at who comes out on top.

Coming in at No. 5 on our list is Clete Boyer, who has a very interesting story. The Yanks scouted Boyer as early as his high school days.

Unfortunately, the Yankees had already signed two “bonus babies” at that point and couldn’t acquire him. This is because bonus babies needed to be on major league rosters for their first two professional seasons.

The Yankees were planning to eventually acquire him from Kansas City, which is what ended up occurring in 1957. Boyer was called up from the minors in 1959 and became the Yankees’ everyday third baseman the following year.

As is evident by his numbers, Boyer wasn’t a memorable hitter by any means but was incredible with the glove.

Widely considered as one of the best power hitters of the dead-ball era, John Franklin “Home Run” Baker was a mainstay of a dangerous Yankees lineup in the late 1910s and early 1920s.

A little known fact: before Babe Ruth, Lou Gehrig, and their gang came to town, the term “Murderers’ Row” had already been coined by sports cartoonist Robert Ripley in 1919 to describe the Yankees lineup, of which Baker was a member.

Baker sat out the 1920 season after his wife died of scarlet fever, but his bat was crucial to the Yankees during his time in New York. A member of the Hall of Fame, Baker ranks third among Yankees third basemen in OPS+.

Red Rolfe is the only player here to have spent his entire career in New York. He was mostly known for his phenomenal glove work. Nonetheless, he did well enough on both sides of the ball to come in at No. 3 on our list.

He retired relatively early — after his age 33 season — due to injuries. He underwent a productive career though. Rolfe was a four-time All-Star and five-time World Series champion.

He played just one game in 1931 before the organization sent him back down for a few more years, but Rolfe ended up becoming a part of one of the Yankees’ most stacked lineups ever with the likes of Gehrig (one of his eventual close friends), Joe DiMaggio, Bill Dickey, Lefty Gomez, and Red Ruffing.

Graig Nettles was offensively productive despite his low batting average. But more importantly, he’s one of the best defensive third basemen of all time.

During his time with the Yankees, Nettles was a five-time All-Star, two-time World Series champion, two-time Gold Glover, and the 1981 American League Championship Series MVP. Nettles was also the captain of the Yankees from 1982-84. The Bombers traded him to the San Diego Padres prior to the 1984 regular season.

His work with the glove was particularly outstanding in the 1978 World Series against the Los Angeles Dodgers. Game 3 played host to one of the greatest fielding performances in playoff history.

Steroids or not, Alex Rodriguez is, without a doubt, the greatest third baseman in Yankees history.

A-Rod experienced one of the most controversial careers in MLB history. His performance-enhancing drug scandal resulted in him missing the 2014 season.

Even so, he’s still one of the greatest baseball players of all time.

Rodriguez was a shortstop before arriving in New York. Thus, it’s incredible that he still went on to become the greatest third baseman in both franchise and MLB history.

Rodriguez was a seven-time All-Star, one-time World Series champion, two-time American League MVP (finishing top-10 in voting a total of four times), and three-time Silver Slugger during his time in the Bronx. 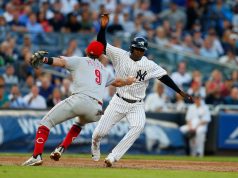