Following his breakout performance in 2019, New York Yankees outfielder Mike Tauchman will be looking to take a step forward this season.

After struggling to find his footing with the Colorado Rockies, Mike Tauchman finally discovered success in the major leagues as a New York Yankee last season.

Following his trade to New York, Tauchman was forced to ride the shuttle bus from the Bronx to Triple-A Scranton/Wilkes-Barre multiple times during the first two full months of the season. Nevertheless, he convinced the Yankees in late June to keep him in the majors for an extended period of time.

As a result, the veteran outfielder was able to showcase his talents over 87 games. Luckily, he didn’t disappoint and was able to take over as the team’s everyday left fielder during the Yanks’ injury-riddled season.

Along with his surprising results at the plate, the 29-year-old was also very productive with his glove. He proved to be one of the best defenders on the Yankees roster.

Despite these outstanding results during Tauchman’s inaugural campaign in pinstripes, the left-hander still has some work to do at the plate. In particular, he’d likely benefit from making a few changes to his approach against breaking balls this season.

The 6-foot-2 outfielder recorded a .292 average, .255 xAVG, .508 slugging percentage, and 31.3% line drive rate against curveballs and sliders last season. Nonetheless, he struggled to create fly balls and hard contact against them.

To put things into perspective, here’s an example of how Tauchman’s launch angle induced so many ground balls last season: 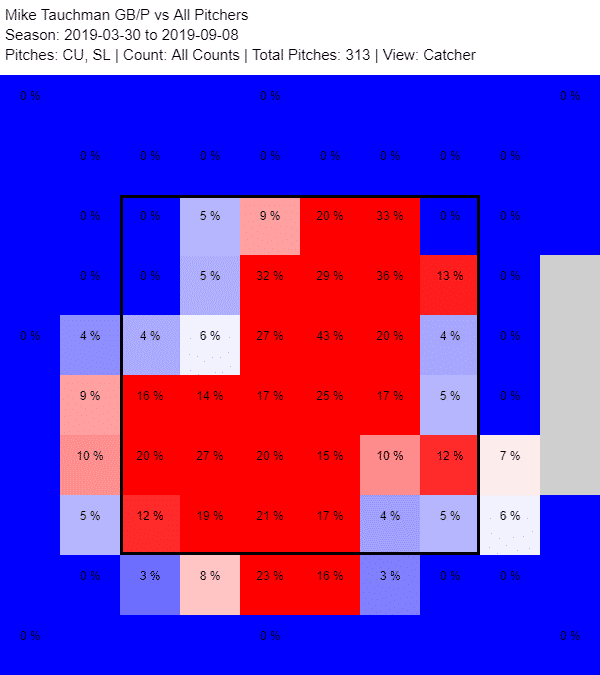 As seen in the chart above, Tauchman’s inability to swing under baseballs in 2019 forced him to generate a ton of grounders against breaking balls that were located in the upper half of the strike zone.

Unfortunately, his swing path also prevented him from creating more than just eight extra-base hits against curveballs and sliders during the 2019 campaign. If he’s unable to produce more fly balls and hard contact in 2020, it’ll likely be difficult for him to improve his slugging metrics.

With that said, there’s a way for Tauchman to accomplish that feat this season and it may only require a slight adjustment at the plate. The former 10th-round pick needs to change the location of his hands while he’s in the batter’s box.

Here’s an example of Tauchman’s batting stance from the 2019 campaign:

The clip above displays how Tauchman doesn’t create much power with his hips. This prevented him from producing a significant amount of hard contact last season. In addition, it also shows how he doesn’t include much movement with his hands while swinging the bat.

If the left-handed hitter were to move his hands farther back towards his left shoulder, he’d likely be able to increase his launch angle and generate more power with his hips. As a result, this adjustment would allow him to create fewer ground balls and increase his hard-hit rate against breaking balls in 2020.

Along with struggling to create fly balls and hard contact against breaking balls last season, Tauchman had difficulty staying disciplined against them as well. In turn, he created a 23.3% strikeout rate, 26.6% whiff rate, and 23.2% chase rate against curveballs and sliders.

While these numbers aren’t alarming, pitchers threw 61.5% of their breaking balls outside of the strike zone to Tauchman. He ultimately created a 51.1% whiff rate against them. Based on these metrics, pitchers will likely start locating even more curveballs and sliders outside the zone to him if he’s unable to lay off these pitches this season.

If this occurs, there’s a very good chance Tauchman will become a liability at the plate. This could lead to fewer opportunities for him during the 2020 campaign. Furthermore, the former Rockie could potentially lose his starting role if he begins generating too many strikeouts.

Tauchman’s long-term future with the Yankees will likely be decided based on his 2020 performance. If he fails to take a step forward, then his stellar defense might be the only thing keeping him in the majors.

Along with Tauchman, the Yankees may additionally employ Clint Frazier, Aaron Hicks, Aaron Judge, and possibly Brett Gardner as outfield options for the 2021 campaign. Therefore, the team likely won’t have a shortage in those regards beyond this year.

If the late-blooming outfielder can make these adjustments against breaking balls, there’s a very good chance he preserves his spot in left field throughout this season and into 2021 as well. Furthermore, he’d be able to better help the Yankees capture their first World Series title since 2009.

Note: All stats from FanGraphs and Baseball Savant.