As NASCAR provides normalcy and hope to American sports fans, competitor Garrett Smithley is making a name for himself on the (virtual) track.

In the wake of the COVID-19 pandemic, the non-stop world of live sports has (rightfully) hit the pause button. It’s not what we, the sports-loving public, want by any stretch of the imagination. Sports are a vital part of our country’s fabric. Their mere absence has only added another layer of uncertainty to this (temporary) new normal. Even the non-observer could miss their prescience, if only for a sense of keeping time and structure.

But for two hours every Sunday, NASCAR has assisted in retaining a sense of American normalcy through the eNASCAR iRacing Pro Invitational Series.

“NASCAR, iRacing and FOX Sports have joined forces to create the eNASCAR iRacing Pro Invitational Series, a multi-week effort that will see NASCAR drivers and dignitaries compete virtually on the iRacing simulation platform,” the series’ mission statement reads. “Amidst a time of great uncertainty, the simulation showcase will serve as much needed entertainment for NASCAR fans across the globe until we are safely able to resume “real-world” racing.” 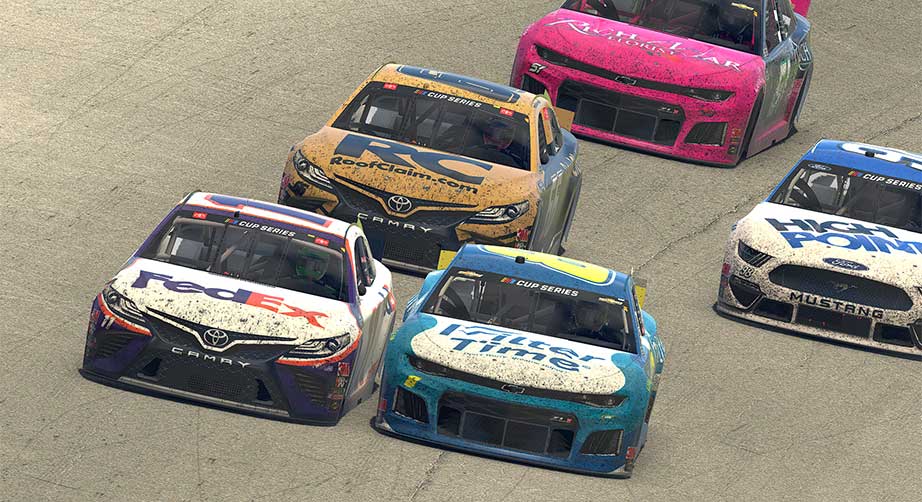 Garrett Smithley is one of several NASCAR Cup Series competitors competing on the virtual circuit. Proceedings carry on through the iRacing simulator introduced in 2008. NASCAR stars’ participation in the subscription-based service was anything but uncommon, but it has entered the mainstream sports fan’s routine as the closest thing they have to live sports until further notice. Each of the races has been televised on the networks of Fox Sports.

Smithley spoke to ESNY recently about the developments and the sense of hope and normalcy it provides. The 27-year-old has partaken in 20 Cup Series races over three seasons and currently drives the No. 51 Chevrolet for Rick Ware Racing. That number and car likeness have transferred over to the iRacing Pro Invitational Series.

“It’s the best that we can do right now. We’re all in the same situation, we’re all in this craziness together,” Smithley said. “It’s nice to pull together with the NASCAR community, with the iRacing community, and Fox.”

“It’s a great escape, I think, for all of us, including the fans and the people in our industry who can’t work right now. To kind of get away from everything, even if it’s only for a couple of hours. It’s definitely cool and it’s exciting to see it take off, for sure.”

Smithley has partaken in iRacing events since 2009.

The sense of NASCAR unity is certainly apparent on race day. Prerace traditions maintained from the real-life editions include an invocation and a rendition of the national anthem. Three-time Cup Series champion, former commentator, and Hall-of-Famer Darrell Waltrip and his wife Stevie delivered the former while actress Rita Wilson sang The Star-Spangled Banner. It was one of Wilson’s first public appearances since she and her husband, actor Tom Hanks, recovered from their cases of COVID-19 in Australia.

NASCAR stars from both the Cup Series and the lower-tier “minor league” circuits have risen to the occasion. 2000 Cup champion Bobby Labonte has returned to Joe Gibbs Racing, taking over the No. 19 Toyota temporarily vacated by Martin Truex Jr. Other popular returnees include Dale Earnhardt Jr. and Greg Biffle.

It certainly helps for Smithley that he has been one of the more successful drivers on the pixelated circuit thus far. He and Timmy Hill are the only two drivers to post top ten finishes in each of the first three races. Smithley finished ninth in Sunday’s Food City Invitational at virtual Bristol Motor Speedway.

The success on the simulator is already paying dividends in the real world. Smithley’s No. 51 is one of the Cup Series’ low-budget teams that are sometimes seen as mere field fillers. But the iRacing showcase has netted Smithley and RWR some much need sponsored support. GunBroker.com has not only signed on to be Smithley’s sponsor for upcoming iRacing events, but for the upcoming Cup Series event at Indianapolis Motor Speedway. The Big Machine 400 is currently scheduled to be run on July 5.

“It’s been really really cool. There have been a lot of people reaching out, a lot of different companies talking,” he said. “It just goes to show how these companies are paying attention. Our viewership is pretty good right now. I think we’re definitely trying to position ourselves in the best spot possible.”

“I think (these races) help not only our exposure, but for my brand personally, just get my name out there, show people that, even though I’m not competing for wins on Sundays, we can still go out here, we can do it, and run with these guys. Grow that brand, grow the Rick Ware brand for sure.”

Sponsors certainly mean everything on the NASCAR circuit, no matter the level of racing. This reliance perhaps increases for a low-budget group like RWR. Smithley was proud to show off his local roots during the first virtual event at Homestead-Miami Speedway. His car bore the logos of Rich Mar Florist, a local business founded in Allentown, Pennsylvania near Smithley’s birthplace of Ligonier. The No. 51 Chevrolet started on the pole and finished in fifth behind three-time Daytona 500 champion Denny Hamlin.

Alas, the dark side of sponsor reliance came to light during Sunday’s Bristol event. In the early stages of the race, Bubba Wallace voluntarily quit the race after getting involved in a wreck with Clint Bowyer on the 11th stage of the 150-lap event. Blue Emu, one of the sponsors on Wallace’s No. 43 Ford, publicly parted ways with the driver after he posted several tweets mocking the angry reactions from fans about his so-called “rage quit”. Two other drivers, Kyle Larson and Daniel Suarez, were parked by NASCAR when the pair intentionally tried to wreck each other.

Thus, one of the biggest challenges of iRacing is maintaining a balance of competitiveness to go along with the original of being a fun distraction for a beleaguered fanbase. Smithley believes that the virtual circuit is close to finding such an equilibrium.

“We’re racecar drivers. We’re competitors. It’s in our DNA. We want to go as fast as we can, we want to beat everybody,” Smithley said. “But at the same time, we’re still out here having fun. I think the biggest thing is just putting on a good race for our fans and the people watching at home. It’s been a great escape for all of us.”

Smithley is certainly doing his part to make sure the “fun” portion is maintained. He constantly live-streams his iRacing experiences on his Twitch channel, racing one such event in costume. Fellow Cup and iRacing competitors Ross Chastain and Landon Cassill likewise partook.

Smithley and friends are far from alone in keeping things fun. Matt DiBenedetto ran one race in his underwear (something the driver of the No. 21 Ford “always dreamt of”), while Alex Bowman tried to have his dog take the wheel of his No. 88 Chevrolet for caution laps. Bowyer has doubled as an in-race commentator for Fox during the competitions and has received mostly positive reviews.

“I think the biggest thing is to keep it lighthearted, keep it fun, (but) we’re also keeping a level of competitiveness,” says Smithley. “Me, I’m reaching out on my Twitch channel during the races, interacting with fans that way. We’ve had a lot of fun with that.”

“It’s fun! We’re trying to get through all of this together. That’s kind of what we’ve got to do. I think it’s a balance, and we’re riding that wave for sure.”

Time will only tell when NASCAR returns to the real asphalt. Races are currently postponed through early May, and that date could be overly optimistic. NASCAR is still planning to run the full slate of its 36-race Cup Series calendar. Kevin Harvick topped Joey Logano by a single point at the time of the pause after four races.

But Smithley assured fans that NASCAR and its drivers will do what they can…from an appropriate distance, of course…to hold fans over until the real engines start up again.

“To the fans, thanks for sticking with us,” Smithley said in a message to NASCAR’s vast, vocal fanbase. “I think the most important in all this stuff is that we’re able to have this opportunity to put a show on for our fans, to get back to even just a little bit of normalcy, even if it’s just for a couple of hours. For our fans, for people in our industry.”

“Keep hope out there, stay healthy, and we’ll get through this together.”