The New York Yankees caught their “White Whale” this past offseason, but Gerrit Cole will likely struggle to prevent the long ball in 2020.

Heading into this past offseason, the New York Yankees were determined to land one of the game’s best pitchers through free agency.

They convinced Gerrit Cole to come to the Bronx by offering him a nine-year, $324 million contract. As a result, New York is now positioned for a deep postseason run this fall, which will hopefully lead to their first World Series appearance since 2009.

By handing Cole the fourth-largest contract in MLB history, the Yankees are hopeful that he’ll be able to replicate his dominance from the 2019 campaign.

Based on these stellar results, it’s clear why the Yankees did everything they could to land Cole this past winter. If he’s able to produce in similar fashion this season, whenever it begins, then New York could have one of the best pitching staffs throughout baseball

Despite the right-hander’s impressive metrics from last season, he did struggle to keep the ball in the park in 2019. During his 212.1 innings of work, the 6-foot-4 hurler finished tied for allowing the 18th-most home runs (29) in the majors.

In addition, Cole also created a career-high 16.9% HR/FB rate (tenth-highest among all qualified starting pitchers), a 33.9% hard-hit rate and a 1.23 HR/9 as well. Since Yankee Stadium is a hitter-friendly ballpark, these concerning numbers will likely continue to rise this season.

Unfortunately for the Yankees, it seems like their pitching rotation will be plagued by home runs once again in 2020. Last season, New York’s starters finished tied with the third-highest HR/FB rate (17.8%), the third-highest HR/9 (1.76) and they allowed the sixth-most home runs (152) among all 30 teams in the majors.

For Cole, he’s witnessed his home run totals gradually rise over the past three seasons. Prior to the 2017 campaign, the hard-throwing righty hadn’t surrendered more than qq home runs in a single season. Now, he’s given up a combined 79 long balls (tied for ninth-most) over his last 98 starts. Furthermore, 43 of those 79 home runs have been hit off his fastball.

In particular, Cole allowed a career-high 17 home runs off his four-seamer during the 2019 campaign. Before spring training was canceled, his heater was also taken deep multiple times in a single outing.

During Cole’s third start of the spring, he gave up four home runs through two innings against the Tigers, with three of those four coming against his fastball. Based on the significant rise in long balls he’s given up since 2017, it seems like these woes have been caused by a change in location.

From 2015 to 2017, the former first-overall selection’s four-seamer averaged 14.5 inches of drop. Since being traded to the Astros, his fastball has averaged just 11.7 inches of drop. Meaning, that he’s been locating his high-90s heater in the upper part of the strike zone since the 2018 campaign.

As shown above, Cole has thrown his four-seamer in the upper half of the strike zone over the past two seasons. As a result, he’s produced a 37.2% strikeout rate and a 33.7% whiff rate with his fastball since 2018. But, he’s also created a 13.5% HR/FB rate over his last two campaigns.

In comparison, Cole primarily located his heater in the middle part of the strike zone from 2015 through the 2017 campaign. While he only produced a 22.3% strikeout rate and a 16.7% whiff rate, his HR/FB rate was down to just 9.7% during those three seasons.

Since Cole’s fastball has been located much higher in the strike zone since 2018, he’s been allowing hitters to generate a higher launch angle against him over the past two seasons. 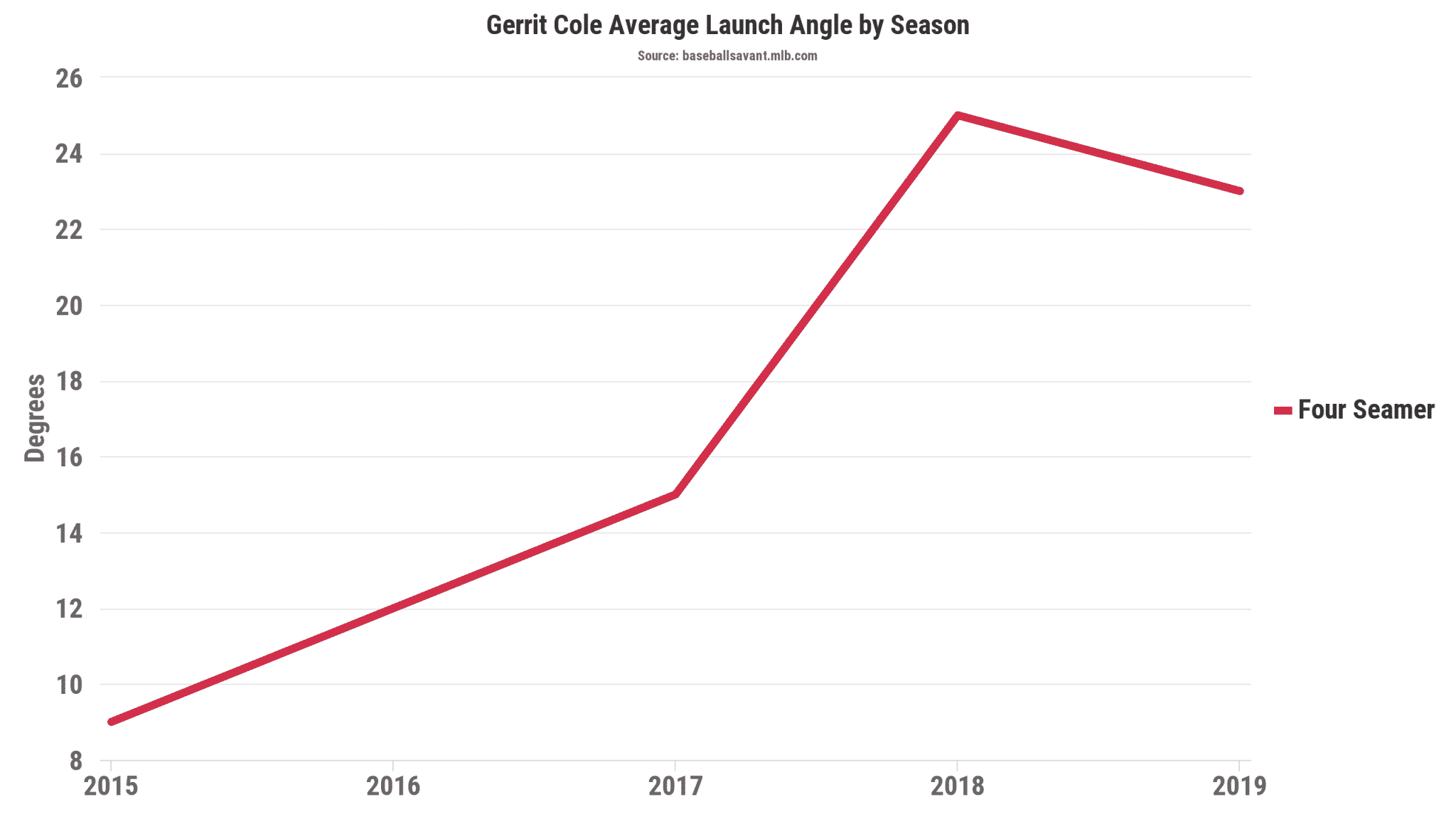 From 2015 to 2017, the launch angle off of Cole’s heaters stayed below 15%. But once he began throwing his fastball in the upper half of the zone in 2018, hitters started to hit home runs more frequently because they were generating a launch angle of 25 degrees. Furthermore, these results continued through this past season, as he allowed a launch angle of 23 degrees.

Based on the number of swings and misses that Cole has induced with his four-seamer over the last two seasons, he probably won’t consider changing its location in 2020. So, he’ll likely continue to create a significant number of strikeouts and will also allow a concerning number of home runs as well.

For the Yankees’ sake, their main priority with Cole will likely be for him to replicate his performance from last season. If he’s successful, then they probably won’t be too concerned about his home run totals.

Whenever the regular season begins, the Yankees will have one goal in mind and that’s to win the 2020 World Series. So, let’s just hope that Cole doesn’t become a liability in crucial moments down the stretch that could potentially ruin New York’s playoff hopes this season.