With the New York Yankees preparing for their pivotal 2020 campaign, they’ll need everyone to remain focused on winning a championship throughout the entire year.

So, that means the Yankees should no longer make any comments to the media regarding the Astros’ sign-stealing incidents. However, Masahiro Tanaka isn’t ready to move forward just yet, which could hurt his performance this spring and into the regular season as well.

During his media availability on Monday, Tanaka mentioned through his translator that he still feels “cheated” by Houston’s players.

Masahiro Tanaka says he feels cheated out a championship because of the Astros' sign-stealing: pic.twitter.com/Q5uthkBBiC

While the 31-year-old has every right to still be upset, he has a lot more important matters to focus on this season. Aside from recovering from his offseason elbow surgery that removed a bone spur, the biggest concern for Tanaka in 2020 is his impending free-agent status for next winter.

Heading into this season, the right-hander’s original seven-year $155 million deal is set to expire next winter. If he struggles in 2020, Tanaka may be forced to wait until closer to next year’s spring training to sign his second contract in the majors.

Currently, the free-agent market is expected to feature pitchers like James Paxton, Marcus Stroman, Trevor Bauer, Robbie Ray, Jake Odorizzi and Jose Quintana next offseason. Given the players on this list, Tanaka would likely be listed at the bottom if he fails to produce quality results this season.

Based on his performance from the 2019 campaign and his injury history, the veteran hurler would also likely struggle to receive offers of $20 million per season next winter if his woes continue.

Along with his concerning ERA, Tanaka’s strikeout totals are also one of his biggest concerns heading into the 2020 campaign. After creating a 25.0% strikeout rate and a 29.5% whiff rate in 2018, the veteran pitcher saw both of those metrics decline significantly last season.

While Tanaka has created a ton of strikeouts with his low-80s slider throughout his career, his mid-80s splitter has been his best swing and miss pitch throughout his six seasons in the MLB. Although, Tanaka struggled mightily to replicate that success with his splitter in 2019.

As seen below, both Tanaka’s strikeout rate and whiff rate sustained career lows during the 2019 season. 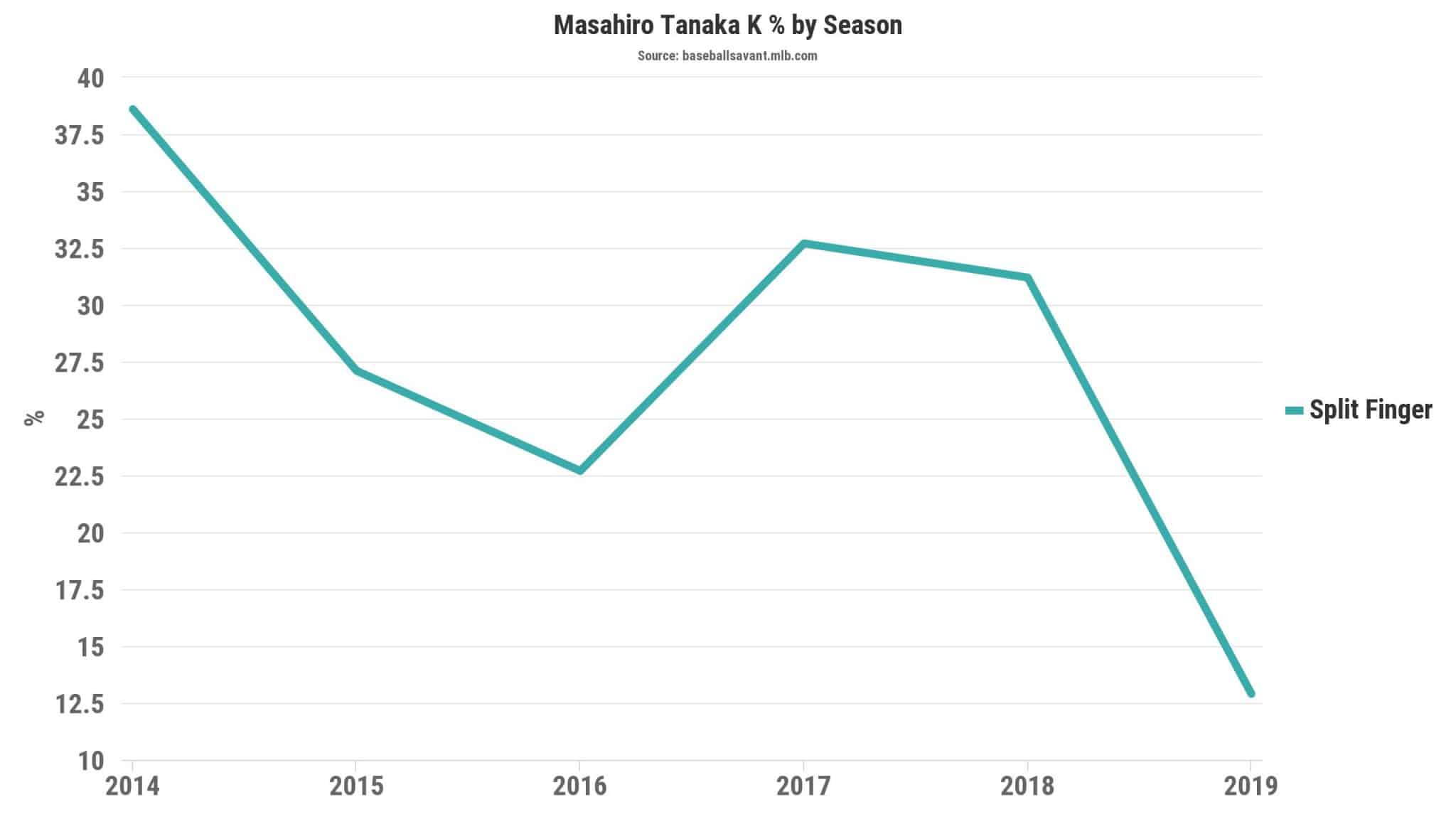 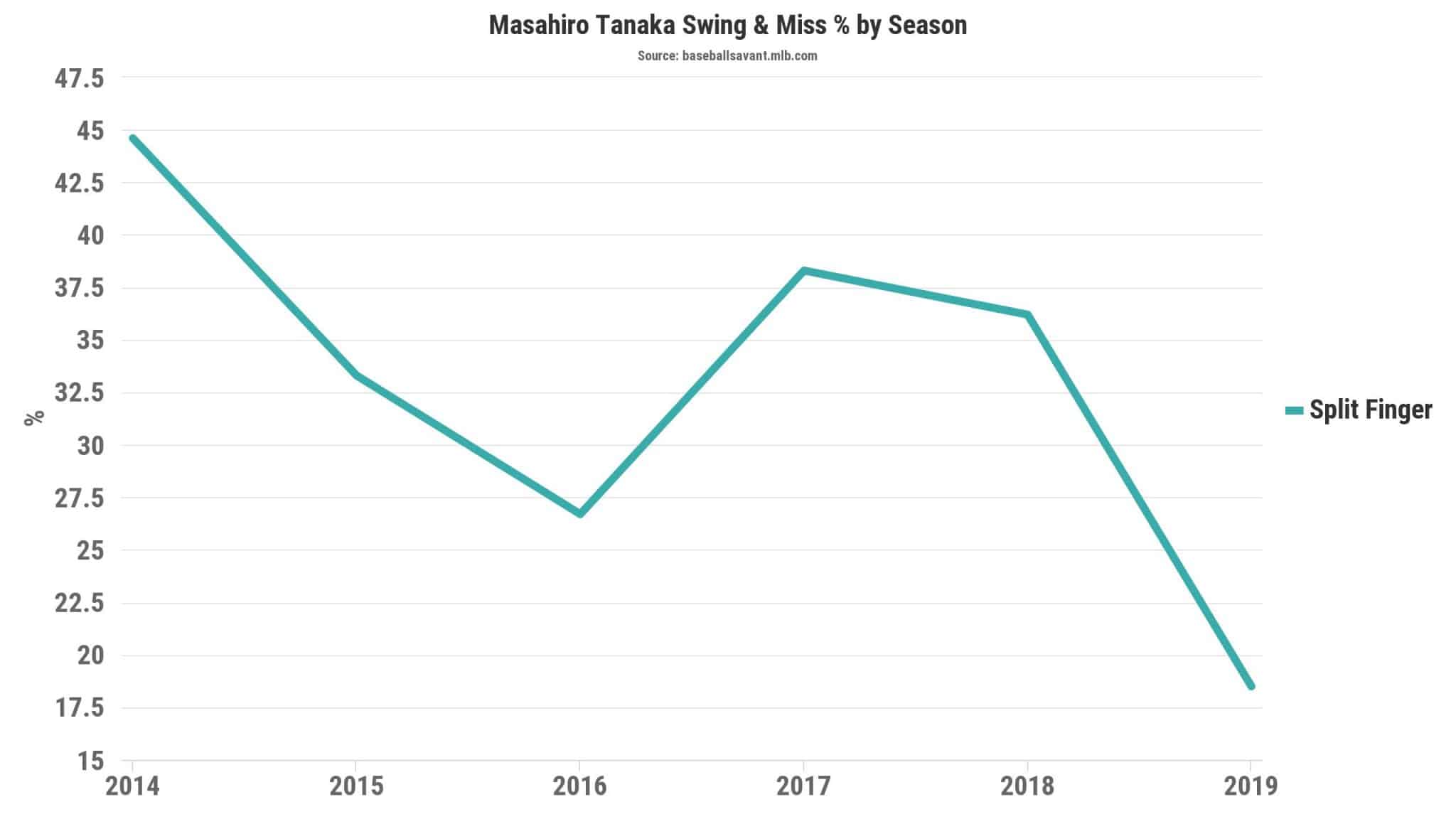 Based on these results, Tanaka’s 2020 campaign may solely be decided on whether or not he can regain control of his splitter. If not, he’ll likely continue struggling to create consistent strikeouts through this season.

In addition, opposing teams will likely stay away from Tanaka in free agency if they believe he isn’t capable of generating a strikeout rate of at least 20.0%.

Among all six of his pitches, it’s clear that Tanaka’s splitter will require the most amount of attention from new pitching coach Matt Blake this spring. Along with his splitter, Blake will also need to help Tanaka reduce the amount of hard contact he allowed during last season as well.

In 2019, Tanaka generated a career-high 39.1% hard-hit rate (tied for 20th-highest), an 88.7 mph average exit velocity (tied for 17th-highest) along with an average launch angle of 10.9 degrees. While these results aren’t extremely alarming, each of them has been slowly progressing in the wrong direction over the last two seasons.

Based on this gradual climb, Tanaka is posied to allow a hard-hit rate of just over 40%, an average exit velocity over 89 mph and an average launch angle of over 11 degrees in 2020. If these results occur, Tanaka’s home run totals are likely to increase next season as well.

While the Yankees would love to re-sign Tanaka next offseason, they’ll likely be forced to choose between him and Paxton. With exciting young pitchers like Deivi Garcia, Clarke Schmidt, Michael King and others slated to reach the majors in 2020, there won’t be enough room for both Tanaka and Paxton within the starting rotation in 2021.

Since Paxton is scheduled to miss at least the first two months of the season, Tanaka will be provided with an opportunity to outperform him through the first half of the season. But, he can’t let questions from the media distract him from his work on the mound during this season.

Sure, Tanaka can be upset all he wants with what the Astros have done. However, his main focus needs to be on what happens with his own performance during this season. If he’s unable to keep that mindset, then his overall production will likely be affected in 2020.