Through the regular season, New York Yankees’ first-year reliever Adam Ottavino was virtually unhittable, but all that changed during the 2019 postseason.

Entering the playoffs, the New York Yankees, without question, owned the best bullpen among all 10 postseason clubs. Although, one of the elite relievers in the Yankees’ bullpen severely faltered during his eight appearances in this year’s postseason.

Veteran reliever Adam Ottavino dominated opposing batters through the regular season. During his 73 appearances out of the bullpen, Ottavino recorded an impressive 1.90 ERA, 1.31 WHIP, 31.1% strikeout rate, 8.1% HR/FB rate, .195 OPP AVG and a 1.3 fWAR.

Utilized mainly as a right-handed batter specialist throughout the season, Ottavino was one of many pitchers manager Aaron Boone relied on late in games during the 2019 season. Boone’s reliance on Ottavino certainly changed this postseason, as the 33-year-old was replaced after facing just one batter four different times during the playoffs.

During those eight miserable outings in October, Ottavino was torched for an 8.10 ERA, 3.00 WHIP, .389 OPP AVG, along with a solo home run from Astros outfielder George Springer in Game 2 of the ALCS. The soon-to-be 34-year-old righty looked extremely different from the pitcher who made opposing batters swing foolishly at the plate during the regular season.

One of the biggest reasons for Ottavino’s struggles in the playoffs was due to his inconsistent command with his wipeout slider. During the regular season, Ottavino threw his slider 44.9% of the time and created a .157 OPP AVG, .157 xAVG .226 SLG and a .229 xSLG through his 73 appearances. The first-year Yankee also produced a 33.8% strikeout rate and a 35.3% whiff rate with his breaking ball this past season.

Ottavino also created the 17th-most strikeouts (46) with his slider among relievers throughout the entire league. Despite recording a 42.9% strikeout rate during the ALCS, Ottavino’s lack of command of his slider is what caused Boone and the Yankees to lose confidence in their veteran pitcher.

Ottavino’s issues with his slider can even be dated back towards the start of September. During the final month of the regular season, Ottavino allowed a .278 OPP AVG, .280 xAVG, .333 SLG and a .317 xSLG against his breaking ball. Too many times in September, Ottavino left his slider up and hanging to opposing hitters, which is what caused the inflated hitting line against his breaking ball.

Unfortunately for Ottavino, the location of his slider worsened through the playoffs. Ottavino’s control for his breaking ball got to the point where the Yankees’ reliever began throwing his slider fewer and fewer as the playoffs went on. During the three games against the Twins in the ALDS, Ottavino utilized his slider 70% of the time over his one-plus innings of work.

Following his woes against the Twins, Ottavino only threw his breaking ball 34.6% of the time during his five outings in the ALCS against the Astros. So, as Ottavino lost his confidence in his slider, he began relying on his sinker significantly more, which was pounded for a .429 OPP AVG in October.

It also became clear that Ottavino was severely struggling with the command of his slider after observing the inconsistent movements with his breaking ball. 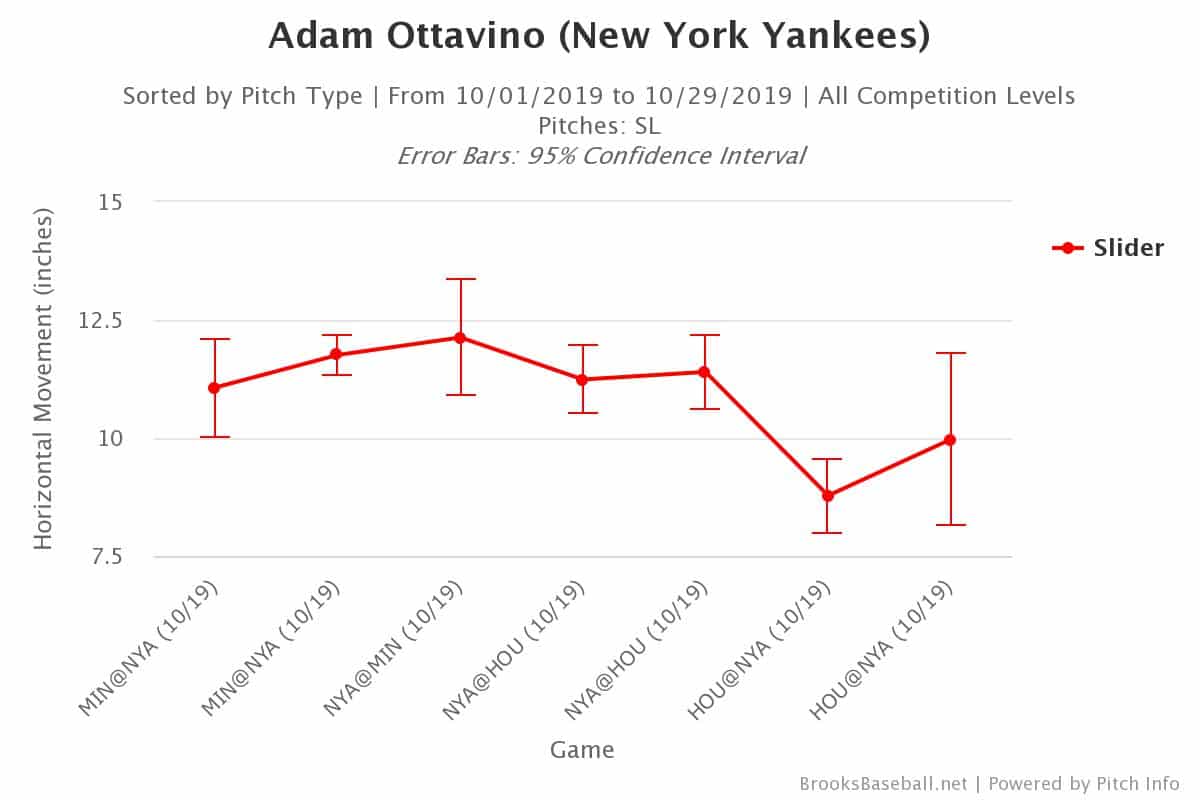 As seen above, Ottavino was unable to control the consistency of the break of his slider during the postseason, as it broke as high as 12.13 inches to as low as 8.78 inches. Through the regular season, Ottavino’s slider averaged to horizontally break away 10.71 inches from his release point. So based on these results from the postseason, it’s clear that something changed for Ottavino once the playoffs began. 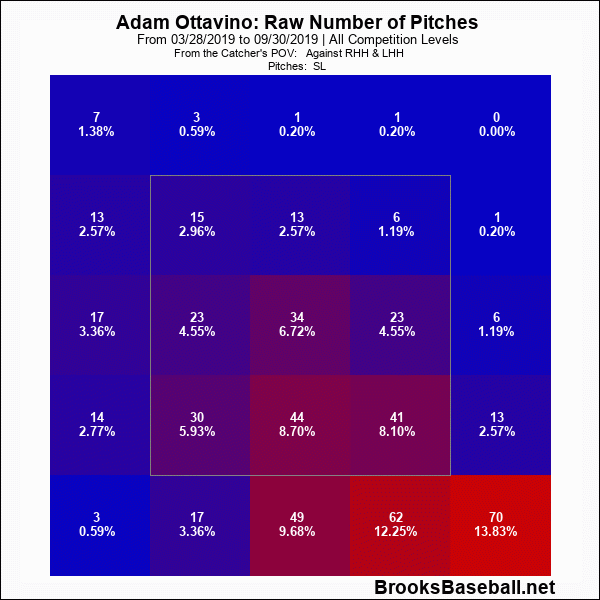 The chart above displays exactly where Ottavino located his slider to both righties and lefties during the regular season. The average horizontal break of 10.71 inches on Ottavino’s slider allowed him to primarily attack the outside corner of the zone against right-handed hitters.

However, the inconsistent movements with Ottavino’s breaking ball during the playoffs caused his slider to barely touch the strike zone through eight outings in October. 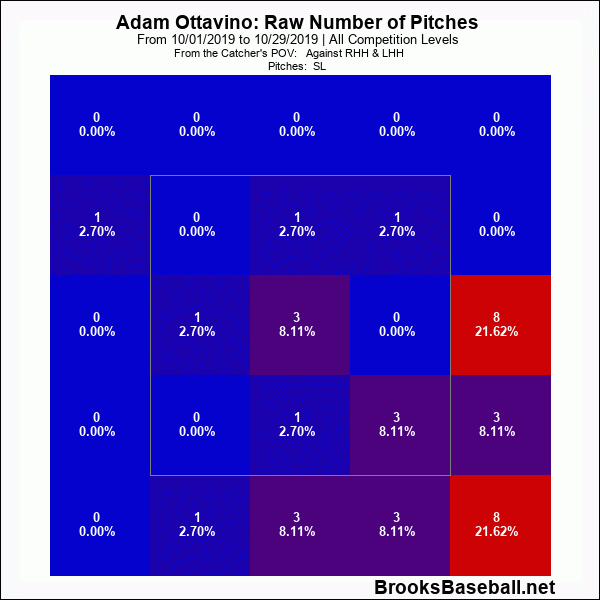 As shown in the chart above, Ottavino hit the strike zone just six times with his slider during the postseason. The lack of strikes thrown is directly resulted from the inconsistent horizontal break that Ottavino was receiving with his breaking ball.

Since Ottavino was no longer able to control his breaking ball with consistency, his slider started to become a non-competitive pitch against opposing hitters. As a result, Ottavino recorded a trio of walks to his four strikeouts during the postseason.

Ottavino’s pitching woes didn’t solely cost the Yankees a trip to the World Series. But they did make it more difficult for the Yankees to piece together the backend of their bullpen. So, the Yankees will need Ottavino to ensure that these poor results don’t return at any point during next season.

While it’s unclear what caused Ottavino to sustain such inconsistent movements on his slider in October, this issue certainly needs to be resolved during the offseason. Whether Ottavino requires a slight change with his delivery or grip of his slider, the Yankees will need one of their best relievers to return to top form in 2020.

Could these 4 Yankees prospects be traded soon?