New York Yankees outfielder Giancarlo Stanton didn’t make much of an impact in the division series against the Twins, but the veteran slugger is poised for a big performance in the next round.

The New York Yankees were able to sweep the Minnesota Twins in the ALDS without help from one of the biggest sluggers in their lineup. Giancarlo Stanton failed to provide much offensive support for his team during their first playoff series of the 2019 season.

Let the great debate begin. (Oh yeah, queue the crazies to call into WFAN while asking for Stanton’s head.)

Through the three games against the Twins, Stanton recorded just a single hit through his eleven plate appearances. While the four-time All-Star was able to produce four walks in the series, Stanton was only able to drive in a single run against the Twins as well.

On the bright side, Stanton walked more than he struck out during this series. The 29-year-old was set down on strikes only twice, which is extremely impressive for Stanton. Before this October, Stanton had created just one walk and struck out seven different times through his five games of playoff experience. So, at least Stanton was still able to get on-base even with his difficulties of recording multiple hits.

Despite Stanton’s quiet performance in the first round of the playoffs, the former-MVP has a very good chance to turn his struggles around in the ALCS with the Yankees likely set to faceoff against the Astros in the next round. Unless the Rays shock the baseball world and are victorious in Game 5, there’s a very good possibility that Stanton’s bat will awake against ace pitchers Justin Verlander and Gerrit Cole.

While it may seem near impossible for Stanton to breakout against two of the best pitchers in the entire league, the Yankees’ slugger matches up much better against high-velocity pitchers.

Throughout the series against the Twins, opposing pitchers weren’t giving Stanton anything to hit. Over half of the pitches Stanton saw against the Twins were either breaking balls or offspeed pitches. Along with receiving mainly soft pitches, Stanton didn’t receive many balls in the strike zone either. 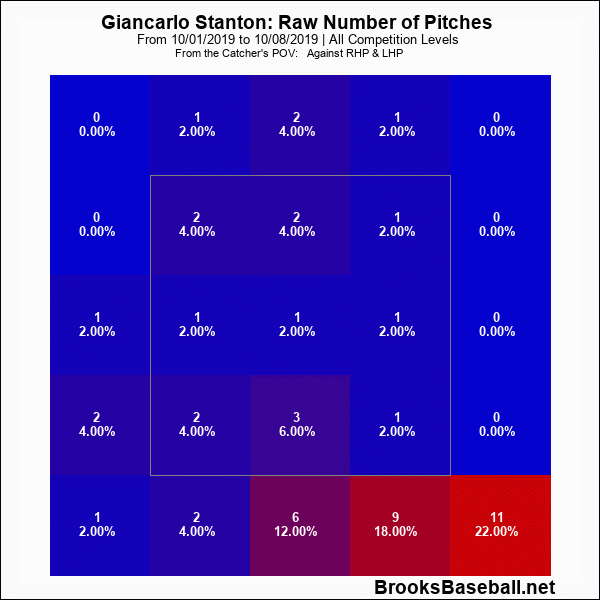 As seen above, the Twins located the majority of their pitches low and away to Stanton. Those pitches that were thrown down and away from Stanton were also mainly breaking balls and offspeed pitches as well, so it’s not surprising he was able to generate a total of four walks against the Twins. Although, it does make a lot more sense as to why Stanton was only able to record a single hit.

Thankfully for Stanton, the Astros’ two best pitchers utilize their fastballs at a high rate. Both Verlander and Cole have thrown their four-seamer about 50% of the time this season. Verlander has utilized his fastball at a 49.2% rate with an average velocity of 94.6 MPH, and Cole has thrown his heater 51.6% of the time with an outstanding average velocity of 97.1 MPH. While Verlander and Cole have created a combined 282 strikeouts off their fastballs this season, they have also given up a significant amount of home runs off them as well.

The Astros’ duo has surrendered a total of 41 home runs against their fastballs this season. That amount of home runs is exactly how Stanton will be able to reemerge himself as one of the most dangerous hitters on the Yankees’ lineup. Throughout his career, Stanton has obliterated fastballs. The two-time Silver Slugger award winner has hit 164 of his 308 career home runs against fastballs.

Stanton has also remained disciplined against heaters throughout his career, which is a trait that will pay dividends against Verlander and Cole. During his 10 seasons in the majors, Stanton hasn’t recorded a strikeout rate or whiff rate above 29% against fastballs. Since both Verlander and Cole both produced a strikeout rate and a whiff rate north of 30% with their four-seamers this season, Stanton’s ability to stay disciplined against heaters should also transition into significantly more extra-base hits, or just hits period, in this series against the Astros.

In order for Stanton to earn the MVP award for this series, he’ll need to force the Astros’ pitchers to locate their fastballs in the lower half of the strike zone. 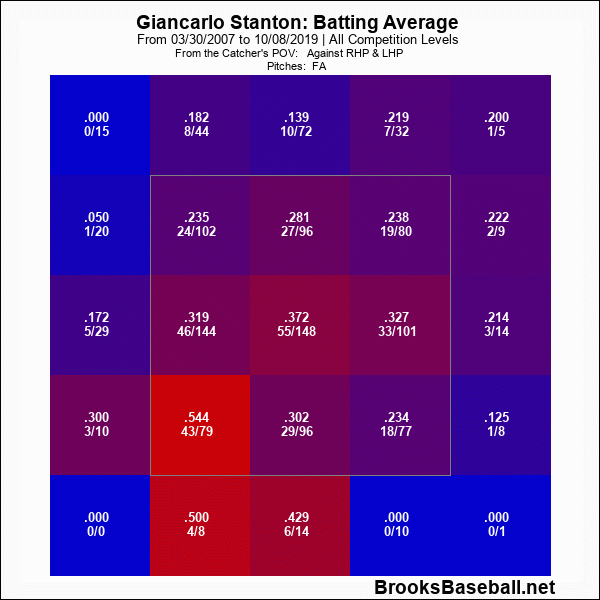 This chart above displays just exactly how lethal of a hitter Stanton has been against fastballs at the bottom of the zone throughout his career. Specifically, low and inside is where Stanton has done most of his damage against them through his ten seasons in the majors. However, Stanton has also been a successful hitter in his career with heaters thrown on the outside half of the plate.

If successful, Stanton will definitely be a difference-maker throughout this series. Even if Stanton isn’t capable of forcing Verlander and Cole to locate their fastballs on the inner quadrant, the Yankees’ left fielder should still be able to perform much better at the plate compared to his performance in the ALDS.

Facing the Astros, if they’re able to get past the Rays, the Yankees will need contributions up and down their lineup, which includes Stanton. The Astros have a clear advantage over the Yankees regarding starting pitching, but the Bronx Bombers are certainly capable of out-hitting the Astros.

For Stanton, a dominating performance in the ALCS that ultimately advances the Yankees to their first World Series appearance of this decade would certainly make everyone forget how unproductive he was in the ALDS.

For now, Giancarlo Stanton and the New York Yankees wait for the results of Game 5. First thing’s first: the Houston Astros need one more victory.

NEXT: CC Sabathia Optimistic He'll Be On The ALCS Roster