New York Yankees INF Gleyber Torres is already one the best second baseman in the league, but there’s still an area where he can improve.

The New York Yankees have to be extremely pleased with the production they’ve received from Gleyber Torres during his first two seasons in the major leagues. In addition to placing third in the AL Rookie of the Year race last season, Torres has performed even better this season.

Opposing teams were also able to strikeout Torres at a high rate against breaking balls last season as well. Torres recorded a 34% strikeout rate and a 38.5% whiff rate off sliders, curveballs and knuckleballs last season.

So far this season, Torres has slightly done a better job against breaking balls. Torres is currently hitting .265 AVG, .241 xAVG, .443 SLG along with a .313 wOBA through 133 games this season. While Torres has hit eight of his 36 home runs off of breaking balls this season, he’s still swinging and missing against them more than other sets of pitches.

While it’s encouraging that all the swings and misses aren’t leading to a high amount of strikeouts for Torres, he still could be putting himself in more hitting friendly counts if he reduces his whiff rate against breaking balls even further. One of the biggest reasons why Torres has recorded a high whiff rate is the location of where opposing pitchers are throwing to him. 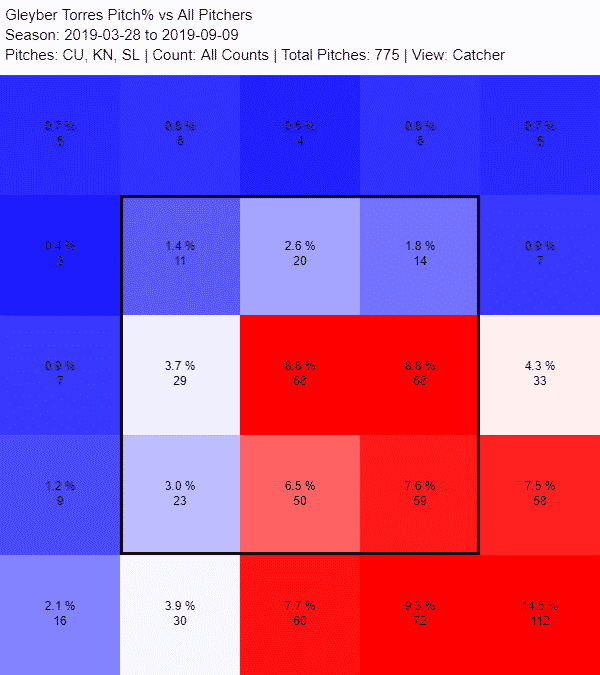 As seen in the chart above, pitchers have primarily been throwing breaking balls low and away to Torres this season. The problem for Torres is that he hasn’t been able to resist himself from swinging at those balls located below the strike zone. 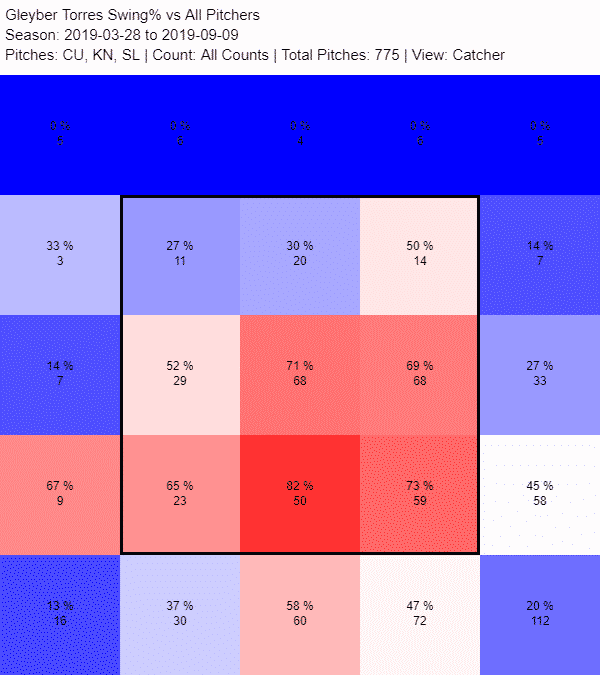 Within this chart, it can be seen that Torres has been fooled by opposing pitchers below the strike zone this season. Clearly, Torres has a desire to swing at breaking balls that are located within the middle of the plate. Although, Torres will need to do a more effective job at determining if that pitch is going to be above or below the strike zone.

Along with where pitchers are throwing breaking balls to Torres, he hasn’t shown any kind of adjustment to counteract the high number of ground balls he’s been hitting. 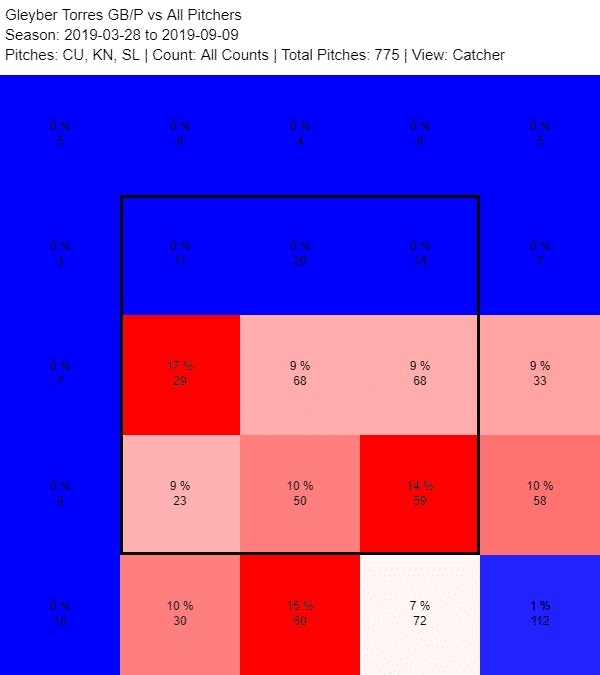 If Torres continues to offer at those pitches below the zone, it will also likely hurt his development over the next few seasons as well. Opposing teams can also view this same data just like I have done. Torres has already seen a slight increase in breaking balls from opposing pitchers this season.

So, Torres will likely continue to see more breaking balls and fewer fastballs as the seasons go on until he makes these key adjustments. The Yankees believe that Torres has the chance to be apart of their team for many seasons to come.

However, Torres will need to find a way to make these adjustments against breaking balls heading into the postseason and next season as well. In order for him to continue to be a mainstay within this Yankees’ powerful lineup.