The New York Yankees have had major issues with their starting rotation this season. Masahiro Tanaka‘s performance this season has been one of those glaring problems within the Yankees’ rotation. The 30-year-old is currently pitching with a 4.56 ERA, 1.240 WHIP and a 4.52 FIP through 25 starts this season.

Those horrific results are large in part because of Tanaka’s ineffective fastball since the start of July. Tanaka’s fastball was one of his best pitches during the first two months of the season. His fastball was utilized 27.6% of the time and batters hit a .240 AVG off it.

Tanaka also produced a 28.3% strikeout rate and a 22.6% whiff rate with his fastball during that time as well. However, those positive results started to disappear during June, which then set the tone for what was next to come for Tanaka’s fastball.

Things have continued to get even worse for Tanaka and his fastball since the conclusion of June as well. This has earned him those troublesome numbers since the beginning of July. Through his five starts in July, Tanaka unsurprisingly threw his fastball at a rate of 23%. But, the reduced usage of his fastball has only lead to more disappointing results for Tanaka.

Tanaka gave up a total of five home runs off his fastball in July and recorded a .414 OPP AVG, 1.000 SLG and a .812 XSLG. While Tanaka did see his strikeout rate climb to 16.7% and his whiff rate to 20.7%, that couldn’t out way all the other damage he surrendered.

The Japanese-born pitcher has done a better job of giving up less hard contact during his three starts this month. But, he’s still been taken deep far too many times and has seen his strikeout rate and whiff rate drop significantly once again.

Through three starts this month, Tanaka has allowed three home runs and has created a 10% strikeout rate and a measly 2.8% whiff rate. Tanaka has also increased his usage of his fastball this month to 30.9%. But he still hasn’t seen results similar to the first two months of the season.

Here’s where Tanaka was throwing his fastball from the beginning of the season to the end of May: 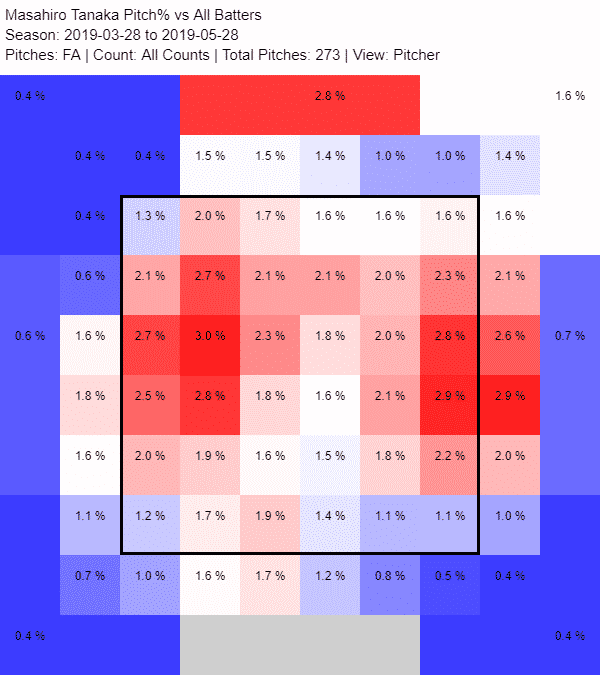 However, Tanaka has done a terrible job of that since the beginning of July. This certainly explains why he’s given up so many hard-hit balls and seen his strikeouts rapidly decline on his fastball.

Here’s where Tanaka threw his fastball during his starts from the beginning of July to his latest start against the Cleveland Indians: 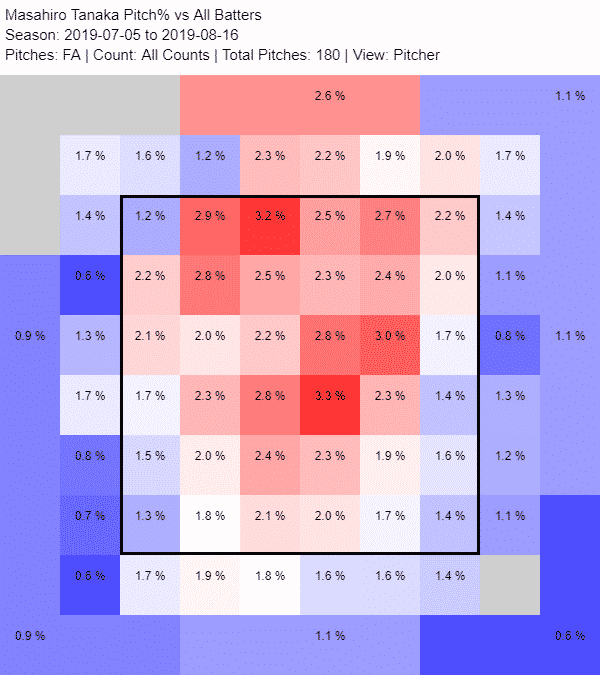 Thankfully for the Yankees, it shouldn’t be too hard for Tanaka to correct himself. Tanaka has been very successful with his other pitches this season. He’s thrown his slider the most out of all his pitches this season and has recorded a .187 OPP AVG and a .344 SLG.

Tanaka has also produced an impressive 27.6% strikeout rate and a 33.6% whiff rate with his slider this season as well. His splitter has also been extremely effective since the start of July. As Tanaka hasn’t surrendered a home run off his splitter since June 22.

Locating his fastball on the corners of the strike zone is exactly how Tanaka can be most successful with it. Tanaka just isn’t able to blow anyone away with his fastball sitting around 92 and 91 mph, which means he has to rely on his location to be effective with his fastball.

NEXT: Do Not Blame Brett Gardner For The Target On The Yankees' Backs