Coming off losing three of four to the Boston Red Sox, should the New York Yankees be concerned over Aaron Judge’s recent struggles?

The New York Yankees were just put in check by the Boston Red Sox over the weekend. A big reason for that was because of the terrible offensive performance from the Yankees’ biggest bat.

Aaron Judge struggled mightily during this past series against the Red Sox. But, manager Aaron Boone stated to the media after Sunday’s game that he isn’t worried about the struggles from his six-foot-seven outfielder.

Here are some of his quotes from Sunday via the New York Post:

“It’s good to score nine runs when our best player doesn’t have a big night for us,” Boone said.

Boone clearly isn’t overly bothered by the rough stretch that Judge just went through in Boston. There’s really no reason for Boone to worry about Judge after his performance during the series against the Minnesota Twins. Judge hit 6-for-16 (.375 AVG) along with a pair of doubles for two drive in two runs.

The Red Sox pitchers were able to pitch to Judge with perfection. Below, are the areas where Judge was being pitched in all four games this past weekend. 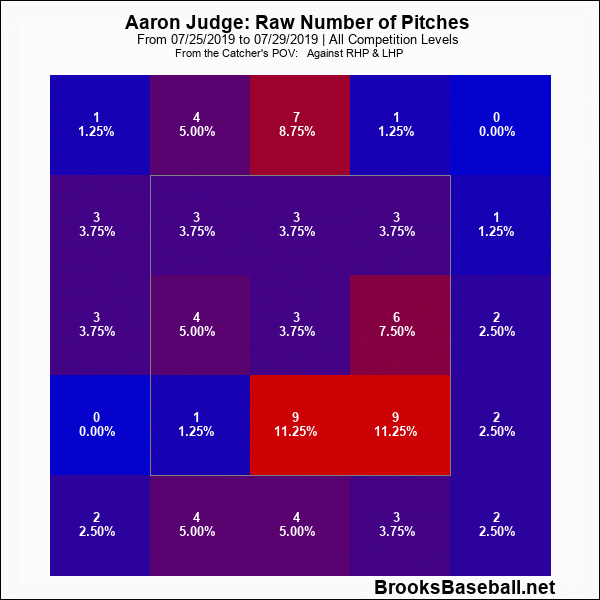 As shown above, Judge didn’t receive many pitches in the strike zone. The Red Sox were pitching Judge high and tight so that he wouldn’t be able to drive the ball out of Fenway Park. Or, Boston hurlers targeted low and outside where Judge wouldn’t be able to square anything up.

Those areas are also one of the reasons why Judge struck out six different times over the weekend. Judge recorded just a single hit based on the way the Red Sox were pitching to him. That isn’t surprising. 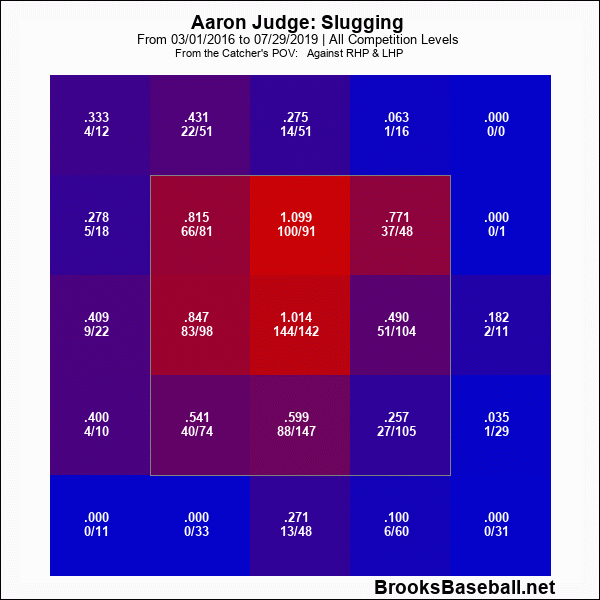 As seen above, Judge performs his best when he receives pitches in the inside and upper quadrants of the strike zone. The Red Sox were wise enough to not allow that to happen this past weekend.

They threw a total of just six pitches in the upper third of the strike zone to Judge. During his career, Judge hasn’t hit many balls that were thrown down and inside to him. Which is exactly why the Red Sox decided to repeatedly pitch to him in that same location.

Another reason for Judge’s terrible struggles against the Red Sox this past weekend is because he hasn’t been able to pull the ball as much this season. None of Judge’s eleven home runs this season have been hit to left field. They’ve been hit to either center field or the opposite way to right field.

Hitting the ball to those areas at Fenway Park is also a tough way to find success as well. Which is likely why Judge has struggled during his entire career playing in Boston. During his 18 games at Fenway Park, Judge has hit three home runs, tallied four RBIs, slashed a line of .164/.265/.315/.580 and he has struck out 24 times.

Thankfully, the Yankees visit Boston just one more time this season. But, the Red Sox are heading to the Bronx for a four-game series beginning on Friday. Which means Judge won’t have much time to forget about his hitting woes before having to face the Red Sox once again.

The Yankees shouldn’t be worried about Judge’s overall production during the rest of the season, despite what Boone says about the Yankees being productive even without Judge. They should become a little concerned if they have to play against the Red Sox during this postseason. Since they will definitely need Judge to perform at his best if the Yankees have any shot at making a run to the World Series.

NEXT: The New York Yankees Trading Miguel Andujar For An Arm Is On The Money