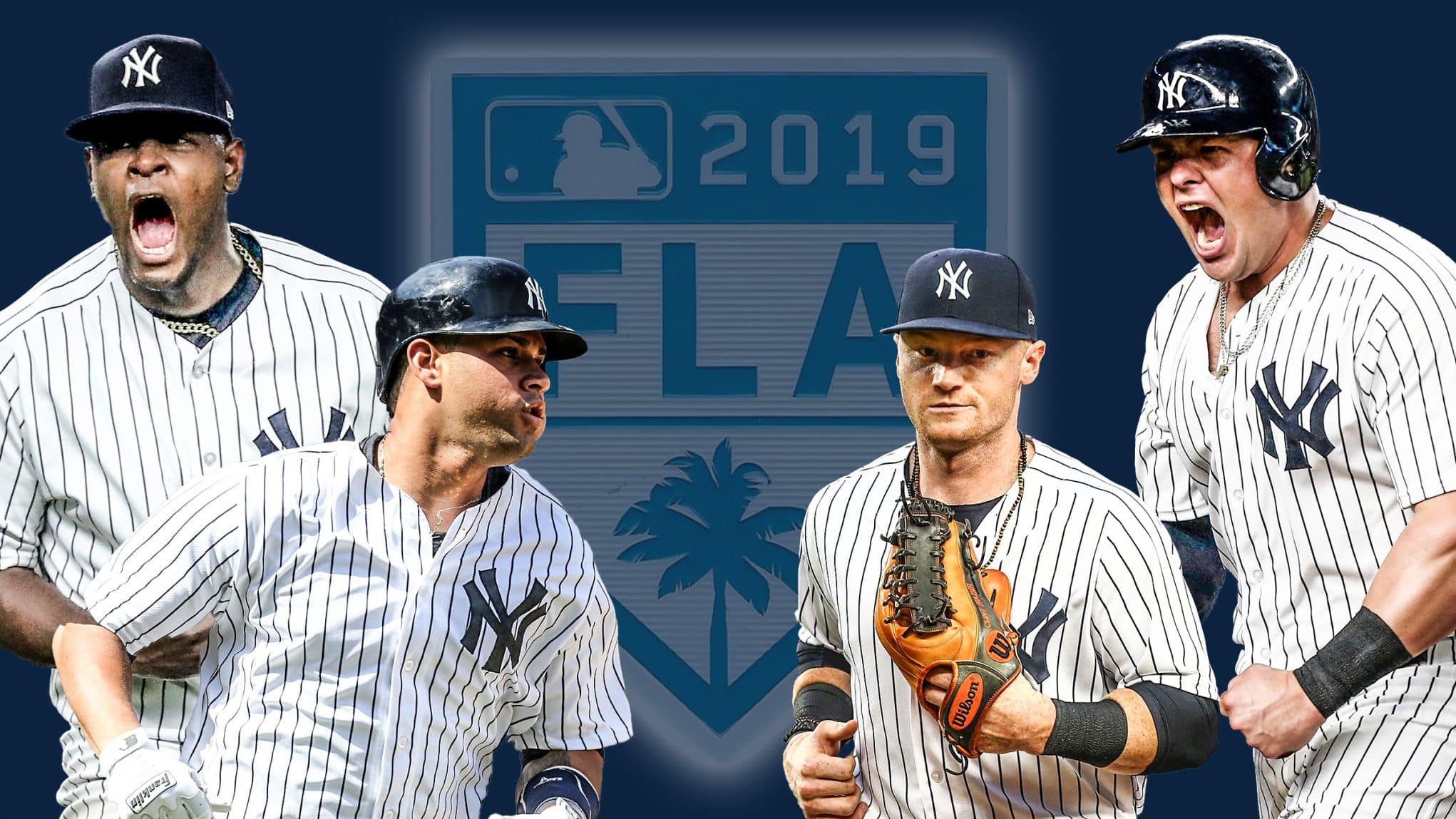 Prospects, position battles, and daytime baseball. Spring Training is here and there are plenty of New York Yankees’ storylines to follow.

New York Yankees baseball is finally upon us. After a soul-crushing end to the 2018 playoffs and an eventful offseason, here’s everything you need to know to be prepared for Spring Training …

How focused will the squad be from day one?

There’s no other way to say it, so let’s just be blunt; the Yankees were absolutely rag-dolled by the Boston Red Sox in the ALDS. I have never seen a more pitiful defeat than Game 3, which the Yanks dropped by a score of 16-1. The Red Sox then went on to win the World Series while dancing on our graves to Frank Sinatra’s “New York, New York” the whole way.

I need the team to be laser focused from the first day of Spring Training to the last game of the year.

I want to see Aaron Judge and Giancarlo Stanton taking no prisoners on their way to 90 combined home runs. Show me Gary Sanchez remembering how awesome it is to be one of the most unstoppable hitters in the game. Give me old man CC Sabathia barking at the opposing dugout on his way to 3,000 career strikeouts and a second ring.

The Yankees need to show up each and every day looking to burn down every stadium they pass through. It’s the only acceptable attitude after watching your biggest rival celebrate on your field, to your song, and on their way to becoming world champions.

Is Gary Sanchez finally back?

Sanchez was nowhere to be found in 2018. A year that should have been his most productive ended with people calling for him to be traded and for backup catcher Austin Romine to start in a one-game playoff. Sanchez has become the forgotten piece of the murderers row 2.0 puzzle and he needs to start reminding people of the fear that starting pitchers feel when they know he’s on a hot streak.

It’s time to remember that this is a guy who hits the ball just as hard as Judge and Stanton. When Sanchez isn’t golfing at sliders a foot off the plate, he’s living at 110-plus m.p.h. exit velocities.

Of equal importance is his ability to block balls behind the dish. We all know he has a rocket arm but his passed ball issues were out of control in 2018.

If he can improve behind the dish and get back to being the productive offensive player we already know he can be, he’ll finally become the Kraken again.

Will the left field baton finally pass to Clint Frazier?

Left field is once again one of the most interesting job openings in the starting nine. The Yankees re-signed Brett Gardner to a one year deal this offseason, showing that the writing is on the wall and his illustrious career for the Bombers is almost over.

This may finally be the year that the baton passes from Gardy to Frazier.

Gardner’s roll on the team going forward should be to split time with Frazier in the outfield while teaching him the ins and outs of playing in the big leagues on an everyday basis. Hopefully, the platoon situation will allow Gardner the regular rest he needs at this stage of his career and give Frazier the experience he needs to be a valuable contributor on a team with sky-high aspirations.

Gardner will get to ride off into the sunset while preparing Frazier to take over in a stacked outfield. Frazier will finally get to show Yankees fans that he truly is ready to do major things.

i wanna do major things

Who will win the first base job?

First base is the position battle that no one in their right minds would ever want to address. Luke Voit is the starting first baseman. I no longer care what Greg Bird shows in Spring Training because he always has a good Spring Training. He has yet to show it consistently when the games matter.

Voit, on the other hand, quickly became another Brian Cashman golden egg. In a deal that sent Chasen Shreve to the St. Louis Cardinals, the Yankees got an absolute monster of a hitter and a solid glove. Voit would go on to carry a lot of the Yankees offense while Judge was out with a broken wrist and he has earned the right to be the starting first baseman on Opening Day.

The only knocks against Voit are that he hasn’t been successful for very long and he’s a right-handed hitter in a righty-heavy lineup. Neither of those knocks means that lefty Bird should be getting regular at-bats.

Luke Voit is probably a dog person. He deserves the starting job. Knowing the way the universe works though, I have a feeling Bird will have another hot spring and not live up to it come the regular season.

Which Luis Severino are we going to see?

Luis Severino‘s young career has been marked by periods where he’s one of the most dominant pitchers in the game and ones where he’s giving up five runs in three innings every start. Severino has since admitted that he was tipping his pitches. Spring Training should serve as our first look at whether or not he’s adequately addressed those concerns.

The Yankees need Severino to be a Cy Young candidate if they’re going to keep pace with a stacked American League. Starting pitching depth was addressed with the addition of James Paxton and the re-signing of both J.A. Happ and Sabathia, but Severino is the horse of the staff. He needs to be ready to dominate as soon as games start going in the win-loss column.

Will Tyler Wade have a role with the big club?

Tyler Wade is officially on his last opportunity to show the Yankees that he can be a valuable contributor. Most of us are already aware of his blazing speed but he also provides great middle infield defense. That ability could open up a major role for him as a utility man considering that our regular defensive wizard, Didi Gregorius, will be sidelined for the foreseeable future.

Wade still needs to prove that he can hit major league pitching. Should he be able to scratch his way to a .250 batting average while Gregorius is out, it should be enough to earn him a spot on the major league roster as a late inning pinch runner and defensive substitution. He could even play a role in a deep playoff run should he manage to stick around the big league club all year.

The talk of the infield in 2018 was the lack of defensive ability surrounding shortstop Didi Gregorius. Neither Voit nor Bird were particularly impressive defensively at first base and Gleyber Torres showed the ability to make fantastic plays while losing focus on the routine ones.

Miguel Andujar was just a complete lost cause in the field.

Every defensive metric showed that he was one of the worst defensive third basemen in the league last year. Despite having one of the most consistently solid bats on the team, he was frequently removed from games in the later innings for a defensive replacement. Manager Aaron Boone even elected to go with Neil Walker as the starting third baseman in a playoff game because of concerns with Andujar’s defense.

Andujar will more than likely never be a higher than average defender. Even if he is working out with Adrian Beltre, it’s unlikely that he’ll ever see the same defensive improvements that the soon to be Hall of Famer saw.

All the Yankees can do is hope that he isn’t such a negative on the defensive side of the ball that it takes away from his incredible ability with a bat in his hand. If Andujar can make the routine plays consistently, Boone will have no problem slotting his name into the lineup card on any given day.

What injuries will befall Jacoby Ellsbury this year?

This is by far the most interesting storyline to follow during Spring Training and it is already begun. The outfielder is going to be out until March with plantar fasciitis.

Ellsbury did not appear in a single game for the Yankees in 2018 and yet somehow he got more and more injured and the season went on. The only explanation is that Cashman conspired with team doctors to keep the quickly aging outfielder on the disabled list so that he wouldn’t block a roster spot and the team could recover some of the money from his terrible contract.

I am very excited to see how the team doctors convince Ellsbury that he’s injured this year. They used up all of the routine wear and tear injuries last year and I want to see them really get creative with it. Either that or the team finally just cuts ties with Ellsbury to permanently clear up that roster spot.

NEXT: What's Cookin'? The Undisputed Recipe For A Perfect Yankees Season

Could these 4 Yankees prospects be traded soon?