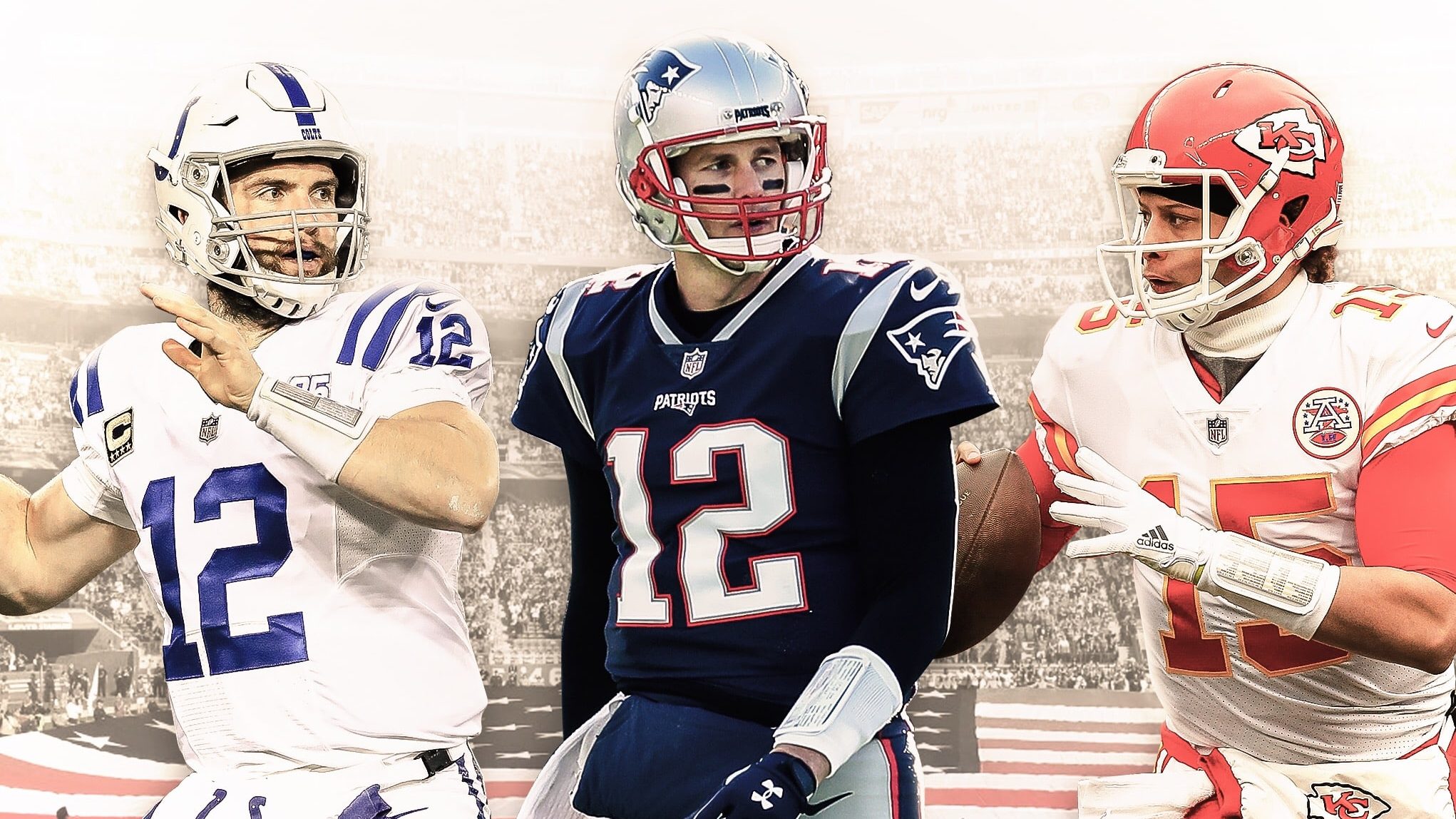 Reflecting on the top-10 NFL storylines outlined prior to the season include Andrew Luck’s resurgence and Pat Mahomes’s dominance.

Back in early September, ESNY put forth a list of the top-10 storylines to look forward to in the 2018 NFL season. The list included teams dealing with quarterback injuries as well as other teams dealing with the threat of their dynasty doing in a downhill direction.

Now, one day removed from the Super Bowl, we’re back with those storylines. Here are the reflections to the list made back in September.

10. Pittsburgh Steelers – Can they finally return to the Super Bowl? (Answer – No)

The Pittsburgh Steelers came into the season with one of the most talented rosters in all of pro football. They came equipped with a potential Hall of Fame quarterback in Ben Roethlisberger, and two elite individuals at their respective positions with receiver Antonio Brown and running back Le’Veon Bell.

The campaign was supposed to be a statement-year for head coach Mike Tomlin. This team deploys a historic past and has a playoff roster every season. However, they haven’t been to the Super Bowl since February of 2011. And now, you can add one more year to that streak.

This past season was nothing short of a disaster for the Steelers. With Bell sitting the entire year due to contract disputes, and Brown leaving the team a game early due to drama within the organization, it’s safe to say 2018 wasn’t the Steelers year at all. Not even a playoff appearance either, their first time not making the postseason since the 2013 season.

Not a great direction to go in. With Brown and Bell possibly both not on the team in 2019, and Roethlisberger only getting older, it’s tough right now to be a Steeler fan.

How did Pat Mahomes pan out? How did trading Alex Smith after a Pro Bowl season to start a 22-year old quarterback pan out? The answer is 100 percent fantastic.

What a year for Mahomes and the Chiefs. Despite losing 37-31 to the New England Patriots in the AFC Championship, Mahomes had a stellar season in his first as a starting quarterback in the NFL.

Mahomes finished the year with 5,097 yards through the air with 50 touchdowns and only 12 interceptions. He also posted a 66 percent completion rate. This led to him making his first ever Pro Bowl, being named the AP Offensive Player of the Year along with the NFL MVP award. Again, all in his first year as a starting quarterback in the NFL.

If Mahomes continues this in the coming years, one day he’ll be a surefire Hall of Famer. What a fantastic year for the young quarterback. Shout out to the Chiefs front office for making the right call with this kid.

Going into this year, many were skeptical if Bears QB Mitchell Trubisky was the answer for the franchise. In 12 games during his rookie year, Trubisky put up just seven touchdown passes to seven interceptions. However, his sophomore campaign in the NFL was a different story.

He may not have as good of numbers as Pat Mahomes or Drew Brees just yet, but Trubisky and the Bears are on the right path. In a couple years, Trubisky should be of the elites in the NFL at the quarterback position. Just give it some time.

7. Cleveland Browns – How will the quarterback situation pan out? (Answer – Baker Mayfield is their guy)

Coming into the 2018 season, the Cleveland Browns had won one game in two years. That’s right, just one. And with their No. 1 overall pick in the 2018 NFL Draft, they selected Heisman Trophy-winning Oklahoma quarterback Baker Mayfield. And from what we saw from Mayfield on the field, it’s clear that he’s their guy.

Mayfield played in 14 games for the Browns this year and made his mark while proving this is only the beginning for the young quarterback. He was head and shoulders better than Tyrod Taylor, who was their other option at quarterback entering this past season.

The former Sooner threw 27 touchdown passes this year, an NFL rookie record for quarterbacks. This helped propel the Browns to win seven games in 2018. Not many, but still seven more than they had won the year before. It’s a start for a huge turnaround for the organization.

Give it a few years and Mayfield will be one of the greats in the pros at the quarterback position. If you can come in as a rookie and help turn an organization around, that’s good enough for me.

Don’t get me wrong, Panthers quarterback Cam Newton is of the best at the position and has been since he entered the NFL. However, his skills as a quarterback and a field general have definitely declined in recent years. Since he won the MVP in 2015, it seems like it’s gone downhill for Newton and the Panthers for the most part.

This past season, Newton did throw for 24 touchdowns and 3,395 yards. However, the Panthers finished 7-9 and missed the playoffs for the second time in the past three seasons.

It was the most careful he ever has been with the ball, posting a completion rate of 67.9 percent. However, the Panthers are an organization where making the playoffs is almost guaranteed by them every year. And with the weapons they have (especially on the offensive side of the ball), going 7-9 is unacceptable.

Give it one more year before Newton becomes a legitimate issue. If improvement isn’t made, don’t be surprised if the Panthers as an organization are willing to go in another direction.

5. Tampa Bay Buccaneers – Is Jameis Winston really worth the headache? (Answer – Of course not)

Bucs quarterback Jameis Winston just keeps going downhill as a quarterback since his Pro Bowl season as a rookie in 2015. He hasn’t made the Pro Bowl since that year, and each year it seems he’s making less and less of a case to be a premier starting quarterback in the NFL.

He only appeared in 11 games for the Bucs this year, splitting time with Ryan Fitzpatrick at the quarterback position. In those 11 games, he threw for only 19 touchdowns to 14 interceptions. Not a great balance when it comes to those specific statistics.

His efforts (along with coaching and defensive play) only conjured up five wins for Tampa Bay this year. Another year of missing the playoffs, along with a top-five pick in the draft this coming April.

Maybe give it one more season of Winston before question marks really begin to rise. But for right now, his off-the-field issues along with his on-the-field struggles don’t make for someone that has the ability to be a franchise quarterback.

4. San Francisco 49ers – Will Jimmy Garoppolo be the dominant franchise QB everyone thinks he’ll be? (Answer – Injuries are a real bummer, aren’t they?)

The 49ers pulled out all the stops last offseason with their quarterback, Jimmy Garoppolo. After going 6-0 as a starting quarterback for the 49ers in 2017, throwing for seven touchdowns and 1,560 yards, Garoppolo was supposed to be the next elite quarterback. The 49ers expected that too when they made him the highest-paid player in the NFL. The deal was a five-year. $137.5 million contract and ensured the Niners had a certain level of confidence in their quarterback.

However, that amount of money only amounted to three games for the former backup to Tom Brady. Garroppolo tore his ACL in a 38-27 week three loss to the Chiefs. His season therefore only amounted to five touchdowns and a 1-2 record.

It’s tough to say with any injury how effective a player will be when they become healthy again. However, we’ll have to wait and see what Garoppolo is able to do when he returns. For now, we can’t answer if he’ll be dominant for San Francisco.

3. New England Patriots – Is there a power struggle within the organization? (Answer – Obviously no)

Is there some sort of private beef between Pats head coach Bill Belichick and quarterback Tom Brady? Is there a power struggle that involves both of them and owner Bob Kraft? Is the dynasty nearing the end?

The answers simply are all no. Not one bit.

Sunday night we all witnessed the Pats do it again. The Brady-Belichick-Kraft era continues with dominance, as the Pats won their sixth Super Bowl title, defeating the LA Rams, 13-3.

Although it wasn’t the best regular season for the Patriots (11-5), they come out on top of the NFL once again. Just when you think it’s going to be over, the dominance and overall winning atmosphere continue.

The Pats also opened up as one of the favorites to win Super Bowl 54, per Odds Shark.

It’s definitely not the end for the Patriots. Sorry, rest of NFL.

2. Seattle Seahawks – Is the run nearing the very end? (Answer – Not quite)

One year removed from their 9-7 missed postseason campaign in 2017, the Seahawks returned to the playoffs this past year. Finishing second in the AFC West Division, the Seahawks posted a 2018 record of 10-6. They eventually fell to the Cowboys in the Wild Card Round of the NFL Playoffs.

However, is the dynasty in Seattle over? I would say not quite. It’s definitely not completely over, I guess. They’re back to the playoffs, and Russell Wilson still maintains his status as one of the elite pro quarterbacks. However, they’re not getting much better.

This is an organization that was going to the Super Bowl or at least somewhat deep in the playoffs just a few years ago. Now they’re either not making it or getting knocked out in the opening round. It’s just not the same dynasty it once was, even with the same quarterback and same head coach in Pete Carroll.

It’s not completely up in flames just yet. But the Seahawks dynasty is in the wrong direction if they can’t get back to at least the NFC Championship at some in the next few years.

What a year for Colts quarterback Andrew Luck. After missing all of the 2017 season with his continuous shoulder injury, Luck bounced back in 2018 to lead the Colts to the playoffs for the first time since 2014. The Colts finished with an 11-5 record, after posting a 4-12 record the year before.

Luck also erased all doubters (including myself) and threw for 4,593 yards and 39 touchdowns this past season. He evidently won the NFL Comeback Player of the Year for his efforts.

Before this past season, many argued that Luck could be labeled a bust at some point if he wasn’t able to perform as well when returning from injury. Many questioned if he were ever going to play another full season in the NFL again. All that’s over, and Luck is back to being the NFL quarterback he once was.

The Colts are going to be a good team for years to come. They have their quarterback back, and they have both a dominant offensive line and defense. At the end of the day, good for them. They dealt with some setbacks in the few seasons prior to 2018.

NEXT: 3 Super Bowl Free-Agent Players The Gianst Should Watch For