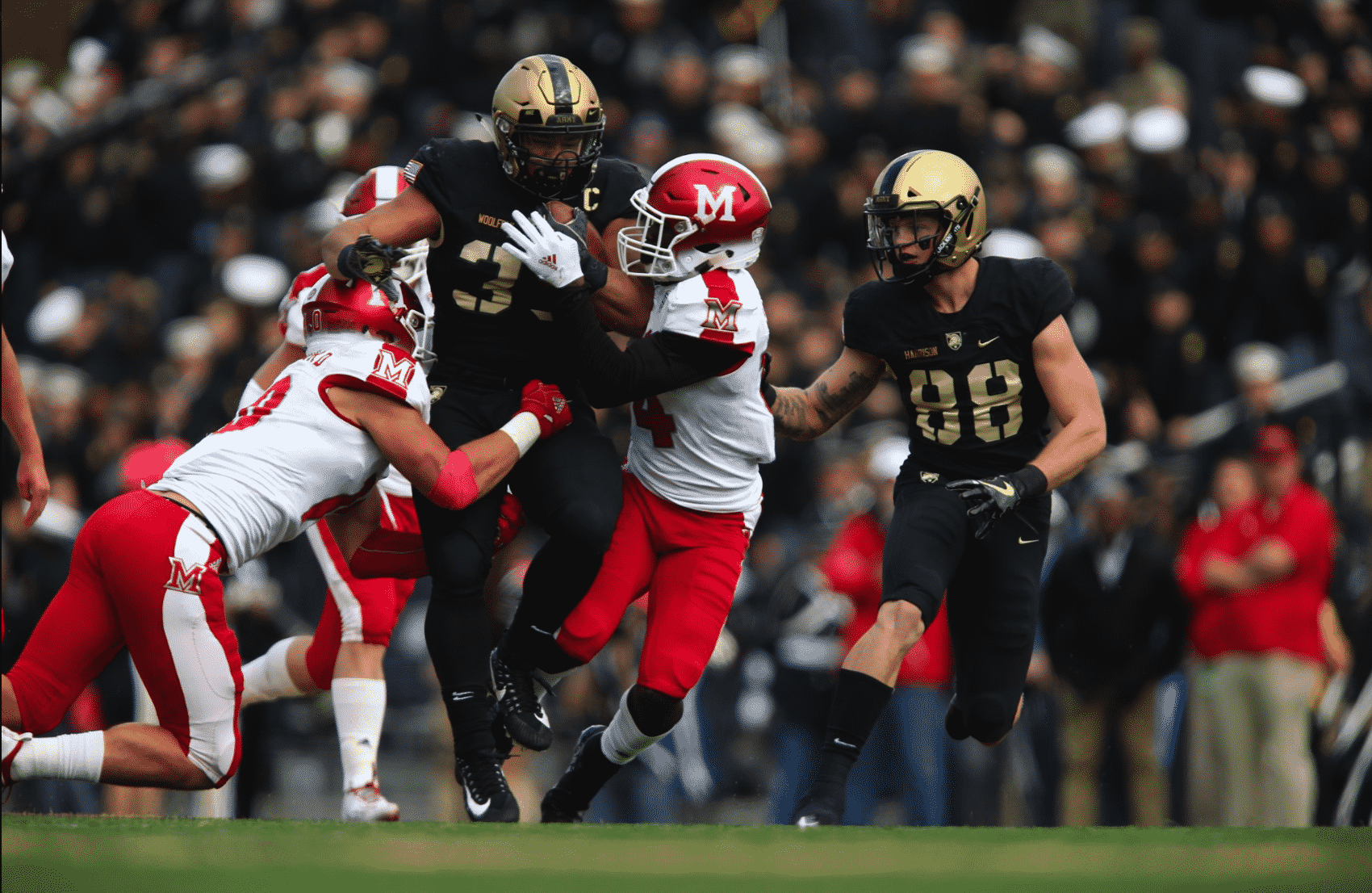 At home for the first time in over a month, the Army Black Knights needed a couple of extra frames to continue the Michie Stadium win streak.

Woolfolk scores his second of the game and now has 30 rushing TDs in his career and it is his 8th multi-TD game.#GoArmy pic.twitter.com/XGHm51dQ6C

WEST POINT- Denied the sweet sensation of college football for over a month, the Michie Stadium faithful might’ve gotten more pigskin than they bargained for the form of two overtime periods in the Army Black Knights’ return.

With the Army portion of the scoreboard yielding a larger margin when all was said and done, those gathered for homecoming weekend certainly didn’t mind.

Fullback Darnell Woolfolk scored two touchdowns, including the de facto game-winner, while quarterback Cam Thomas added another score and 137 yards on the ground as the Knights eeked out a 31-30 double-overtime victory from the Miami-Ohio RedHawks.

“I don’t know what to say. Holy smokes!” Army coach Jeff Monken said with a smile afterward. “In the end, I’m proud of our team. We found a way to win.”

“It is a little overwhelming, but I can’t take credit for any of it,” he said. “I have to give credit to all of my teammates, my coaches, the fans. They believed in me the entire time and for that, I’m so grateful.”

“I’m really proud of him. He took care of the ball and made some tough decision with some bodies around him,” Monken said. “There was a couple that he missed, but I thought he did good for a first time. Rookie in, having the game on his shoulders, that’s a lot.”

With the victory, Army (5-2) continued the nation’s second-longest home winning streak, trailing only Alabama’s mastery. The win over the RedHawks was their 10th consecutive at Michie Stadium, the longest successful streak since the Knights won nine in a row in 1995-96.

It almost slipped away from the Black Knights’ grasp.

Holding a 21-7 lead midway through the fourth quarter, the RedHawks marched down the field twice to force extra sessions. Their final drive of regulation, a 16-play, 82-yard trek, had a particular flair for the dramatic, ending on a five-yard Gus Ragland touchdown pass to tight end Nate Becker with fourth and goal with 17 seconds to go. The senior Ragland threw for 329 yards and four touchdowns.

After exchanging field goals in the first session, Army took the lead for the final time on a seven-yard drive by Woolfolk. With that score, Woolfolk became the fifth player in Black Knights history to tally at least 30 touchdowns for his career. All that matters to him, however, was the win in front of home fans.

“I really think this is one of the best crowds we have had here,” Woolfolk said of the Michie crowd. “The support is growing and it is unbelievable. When you have that kind of support it motivates the guys to play harder for everybody around them, not only our teammates but those supporting the program as well. Honestly, I think it is a great thing we have going for our program and we have to work hard every day to keep that going.”

WOOLFOLK carrying some defenders in with him. @ArmyWP_Football has the lead here in 2OT! pic.twitter.com/Gz9eqZB0ZF

West Point couldn’t fully exhale until the final play of the game. Army pressure forced Miami (3-5) into a 15-yard, fourth-down situation. The RedHawks, however, responded with Ragland’s final score of the day, improbably finding Luke Mayock to silence the Black Knights crowd.

Feeling the momentum, Miami went for two points and the win. Intense pressure forced Ragland to desperately toss the ball into the green abyss, but it somehow landed in the hands of his running back, Kenny Young. With blockers ahead, Young raced for the win, but the debate was finally settled with a big hit from defensive back Elijah Riley, who stopped Young two yards short of two points.

It was a big day for Riley, who had a sack on the final drive, as well as four tackles and two pass deflections on the afternoon as a whole.

Monken assured fans and reporters that he was going to enjoy the hard-fought win. He insisted, however, he’d be immediately getting back to work to see what the team can improve on next weekend against Eastern Michigan.

“I’m probably as guilty of not enjoying as much as anybody,” Monken said. “I want us to play better, not play good. It’s not necessarily about winning or losing the game. I want us to play our best. Not to take anything away from Miami, but I don’t think we played as well as we’re capable of playing. That eats at me. I’m going to try and enjoy the victory as best as I can, but I can’t wait to get to tomorrow so we can get these mistakes corrected.”

NEXT: ESNY College Football Top 25: A New No. 2 After Georgia Loss