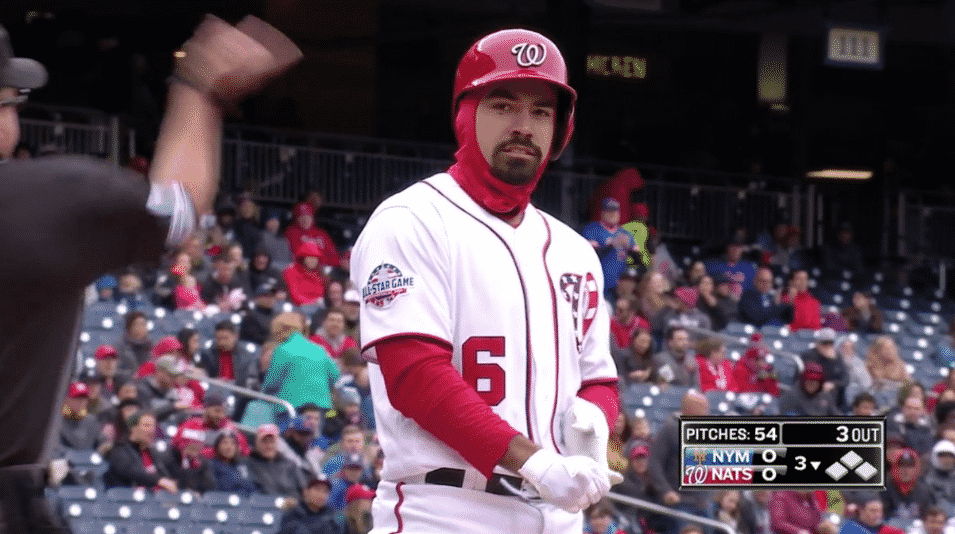 Well, the umpires are getting more and more strict these days. During today’s New York Mets-Washington Nationals game, Anthony Rendon was ejected for practically nothing.

Jeez, Anthony Rendon. Don’t flip out over losing a tight contest to the New York Mets.

With two outs in the bottom of the third inning, Rendon watched strike three whisper over the outside corner. A questionable call, Rendon expressed his frustration with a common bat flip and removing his batting gloves. Well, that was enough for home plate umpire Marty Foster to toss him.

Wait…what? The slow-motion replay showed that Rendon didn’t even say a word and yet he was tossed almost immediately.

Anthony Rendon got ejected for this? pic.twitter.com/2moGgjPOWK

I’ve seen players literally jaw at the home plate umpire and get in their face (aka Adam Jones during Friday night’s marathon contest against the New York Yankees) without any consequences. This, this was a mistake.

Granted, we have no idea what Rendon said earlier when Steven Matz struck him out looking in the bottom of the first inning. However, this time, it is clear that he did not utter a word.

Rendon is batting .273 on the season with one home run and four RBI. Yesterday he owned Mets pitching with a 3-for-3 afternoon in the Nationals’ 8-2 loss to their division foes.

The Mets have started off this season with a bang, with a 6-1 record and a 2-0 start against the defending National League East champions. Perhaps that is part of where the frustrations come for Rendon and the Nationals.

Rendon’s ejection was the only exciting point for the Nationals, as they fell again to the Mets in a tight 3-2 contest. They are now 4-4 on the season, one that predicted they would potentially be World Series favorites.

But why? The umpires have something to respond to as this ejection seemed both unwarranted and unnecessary. Go figure. Just another reason to be upset with the umpires and it’s only game eight.

NEXT: New York Mets Now 6-1 After Impressive Victory In D.C. Against Nats