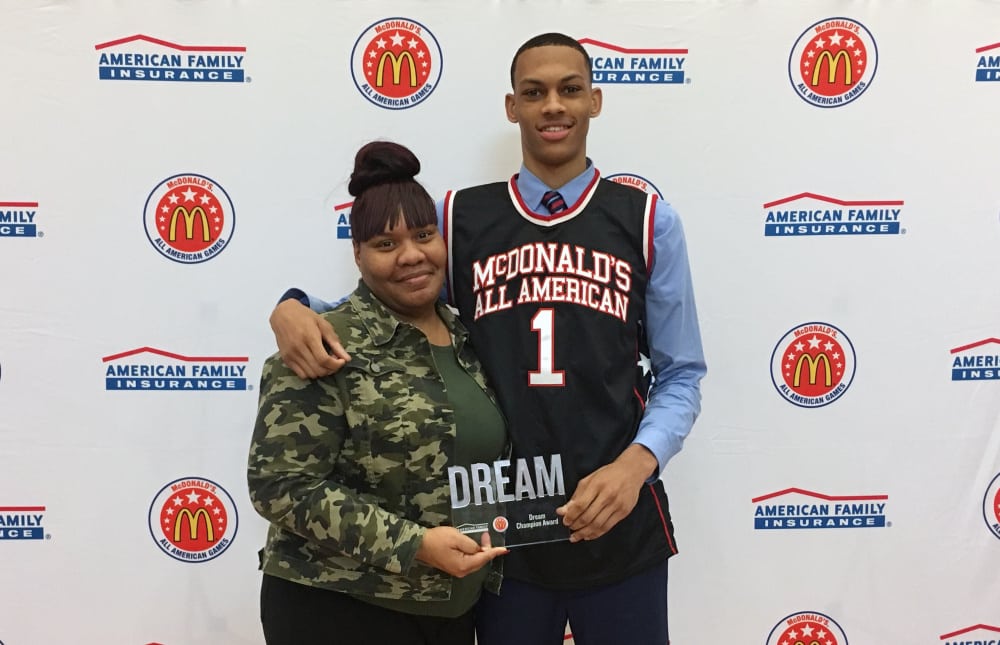 For months, Darius Bazley was headed to Syracuse University to play basketball. That all changed Thursday in an unprecedented move.

He is a McDonald’s All-American and a projected top-10 pick in next year’s 2019 NBA Draft. He hails from Cincinnati and played basketball at Princeton High School. Since 2017, he has been committed to playing basketball for Syracuse University.

That all changed on Thursday when he informed Yahoo Sports’ Shams Charania that he has officially de-committed from Syracuse to play in the G-League, the NBA’s developmental league.

In the one-and-done era of college basketball, this is the first time a player has ever gone from high school to the G-League. Players have gone overseas occasionally before in order to bypass college, but this could be the first step in a future trend of high school athletes making the transition to the pros by signing with sister teams in the G-League.

“This is a life-changing decision,” he told Charania. “I put a lot of thinking into this with my mom and close circle, especially sitting down with her. It’s just like making the decision to which college you want to go to. Me and her did some talking, and I prayed on it. I talked to my high school coach, Steve, who played overseas, and then I talked to a couple of guys in the G League who have experience. Ultimately, playing professional basketball has always been my dream. It’s always going to be the dream goal, always going to be the goal until I achieve it. This is going to put me one step closer to doing so.”

He also went into deeper detail on the opportunities the G-League offers.

“The G League will have the most to offer, considering that is the development league for the NBA. I will get more out of that than going overseas. The G League is the closest thing to the NBA. I see most guys now are spending time in the G League even after they went to school and the draft, so this gives me the chance to accelerate the process. There have been a lot of successful guys who have been brought up in the G League, and I’m confident that I will be one of them.”

Bazley continued the announcement with what basketball means to him and his future:
“I’m self-motivated because I know this is what I want to do for the rest of my life. This is how I want to make a living. This is how I want to provide for my family, and provide for my love of basketball. I’m not playing any games with this. I’m attacking this straight forward. I’m not maneuvering around this, take any side steps. I’m taking this head on. This is the decision that I made, and I know it will work. I know what I’m capable of doing, and I’m going to do just that.”

Darius Bazley certainly has the confidence that NBA players need to believe in themselves, and as a future top-10 draft prospect, he could be in the NBA very soon.

As a prospect, Bazley appears solid as a possible two-way prospect in the NBA. At his one McDonald’s All American Game, he scored 11 points and got 7 rebounds. His defensive activity was encouraging as well.

With such a highly regarded high school athlete making the leap to the G-League instead of the NCAA or overseas leagues in Asia and Europe, this could very well be a new pathway for young players to get themselves to the NBA.

It is certainly a risk, and he will play in front of much smaller audiences than he would at the Carrier Dome. If it works out for him the way he plans, future prospects will surely follow his lead.