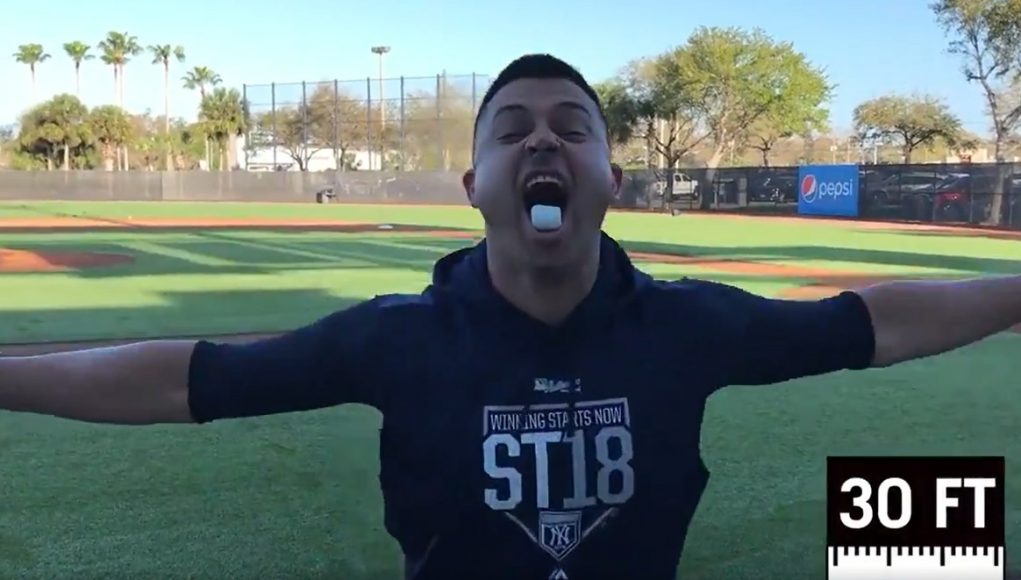 Nick Swisher has a World Series ring under his belt with the New York Yankees but as a spring training advisor, he adds another title to the collection.

Perhaps all the accolades during his time in baseball was just not enough for Nick Swisher. Now the former New York Yankees outfielder can add another trophy to his collection.

Thanks to Matthew Stucko and the YES Network, fans got to witness history in the making with Swisher using his big mouth for good. And no, that isn’t offensive seeing as how Swisher says it himself in the video circulating around social media.

Where the idea for a marshmallow-catching competition came from, some will have no idea. However, incredibly knowledgeable fans will remember Swisher completing a similar feat in an Instagram video posted on his personal page back in August of 2016.

Ah, so there’s the history behind it. Regardless, I think this showing is more impressive than that video from almost two years ago.

Look at the form he shows. Look at the concentration. Look at the JAWS on that beast! Swisher doesn’t choke under pressure. Instead, he rises to the occasion and entertains us all.

Not to be ignored is Stucko, the quarterback behind the marshmallow toss. I mean, if you’re looking for a place to play in the NFL, I hear that Eli Manning is retiring pretty soon…

But back to Swish. While he struggled at great distances, you knew he had the determination to stick with it and never give up.

Perhaps the greatest part of this is the reactions to his accomplishments. He jumps around, imitates an airplane and is constantly laughing. That infectious energy is just what made him such a huge part of the Yankees and continues to do so today.

I mean, this guy literally could have fun while taking a New York State Regents exam. I imagine he would automatically fist-pump, shout “OH YEAH, THAT’S RIGHT” after answering one question…and continue to do that through the entire test.

So watch this video on a loop. It’s just that good. Swishalicious has some delicious skills, it seems. But, why are we surprised? He’s always excelled at catching flying white projectiles, whether it be with his glove or his mouth.

NEXT: New York Yankees: Who Wants To Be The Opening Day Starter?