The top culprit in the miraculous Stefon Diggs touchdown was the New Orleans Saints defense showcasing a classic overplay of the situation. Breaking it down in the ESNY Film Room makes it all the more obvious.

What do they say about the prevent defense? The only thing it does is prevent you from winning.

It’s one interesting aspect of the NFL.

Defensive coordinators are forced to play strategy based on time. Allowing yards in exchange for time is something that’s more than necessary in a league that favors every aspect of the passing game.

When a defense actually showcases an aggressive defense in a prevent situation, it becomes refreshing.

The problem for the New Orleans Saints on Sunday night in Minnesota is that they remained aggressive at the wrong time. The Stefon Diggs miracle touchdown revealed a classic “overplay-the-situation” call.

On a 3rd-and-10 with 10 seconds left and no timeouts, the Minnesota Vikings literally needed a miracle. Case Keenum needed at least 15 yards for a legitimate shot at a desperation field goal. In fact, 17 yards was needed to attempt a 62-yard field goal.

Pat Shurmur had Case Keenum and his offense come out in a classic bunch set (strong side to the wide side of the field): 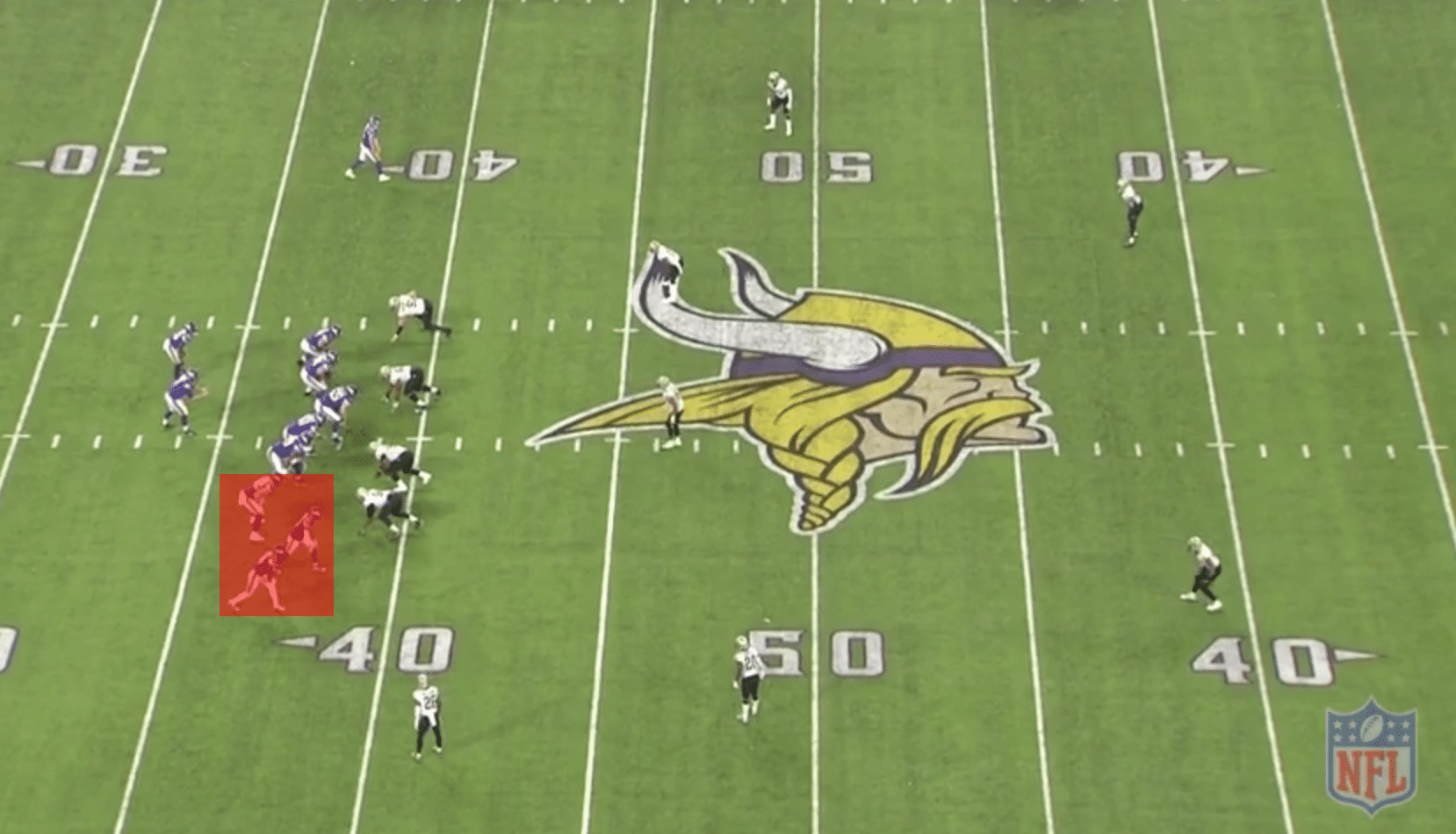 Defensively, the Saints screw it up.

A four-man rush is fine. It works on every level. The personnel is solid in a dime (six defensive backs, one linebacker, four defensive linemen).

The area they mess up comes in playing too aggressively across the board. There isn’t enough attention given to the strong side bunch look and the closest corner to us on the strong side is way too close to the line of scrimmage.

The play is a classic flood route and the Saints know it’s coming. It’s literally the only thing Minny can do. 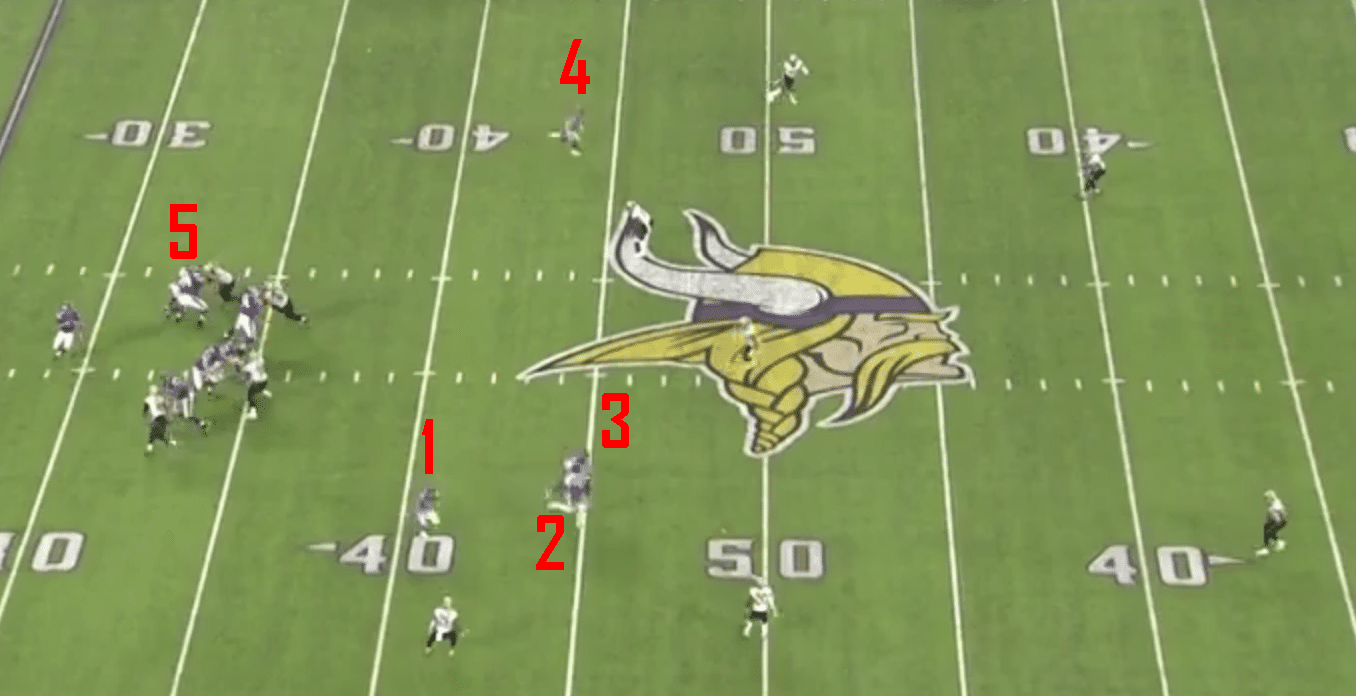 At this point, everything is playing out to plan. The bunch features a short out, a deeper out, and a deep corner. The weak side has the other receiver either going post (for the rare home run) or with a deep out. The back stayed in to block.

Here’s when New Orleans finds itself in trouble:

The highlighted corner above screws up royally by clinging on to the short five-yard out.

Why? For what? A five-yard catch and out-of-bounds does nothing. In fact, let him catch it and try tackling him in-bounds to end the game. He needs to provide a 10-yard cushion here which, in turn, would allow the defensive back on the deeper out to also have more cushion:

If each guy is deeper, Diggs won’t have that room and it wouldn’t have set up that one-on-one with deep safety Marcus Williams.

The other area the Saints screwed up is by not going three-deep.

Look at the wasted middle linebacker:

He’s in no man’s land. He’s also entirely too shallow.

Instead, have that MLB on the running back and place the extra DB (who’s currently responsible for the running back as the third deep safety). And no, that third deep guy won’t have to worry about the middle of the field—thanks to no timeouts. He would basically shade towards the strong sideline side and act as a safety net—immediately paying attention to the wide/strong side, his left.

This is what the Saints lineup should have looked like: 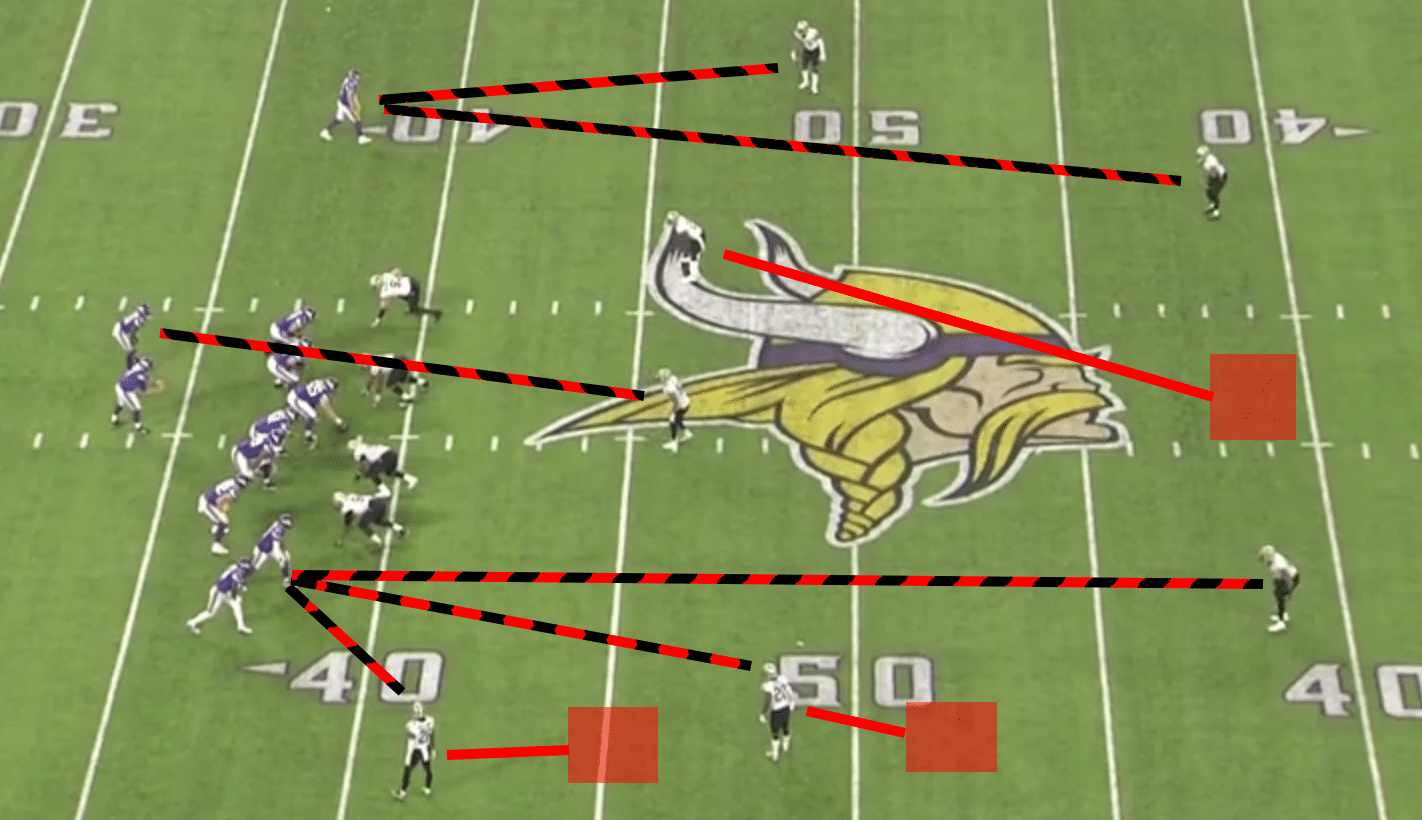 Why keep the sixth DB so low and so out-of-play alongside the middle linebacker when the situation dictates he needs to be involved with the deep sideline play?

New Orleans played it way to aggressively and will now have an entire summer to think about this exact play.

Sure, young Marcus Williams is the scapegoat and yes, he absolutely choked, but Saints defensive coordinator Dennis Allen put his team in a bad spot.