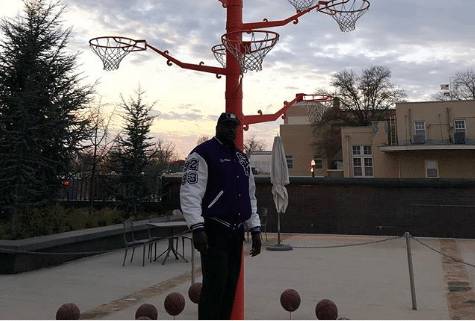 Hall of Fame center Shaquille O’Neal has been hard at work chopping down backboards to create his latest masterpiece.

Shaquille O’Neal has gone by a bunch of different names over the years. Shaq, Shaq Daddy, Superman, Diesel, Mayor McShaq and, of course, the Big Aristotle. But now, you can refer to him Dr. Shaq—or Shaquille O’Neal, B.D.—backboard destroyer.

As a tribute to his destruction, O’Neal created a ‘Broken Rim Tree,’ comprised of 19 rims attached to a tall red pole.

The seven-foot-one, 325-pound behemoth of a man left a path of destruction on basketball courts over his 19-year NBA career. The Shaq Attack made it’s way to East Rutherford, NJ at one point, the former home of the Brooklyn Nets.

Then there was that time he broke the backboard but failed to impress NBC’s Bryant Gumbel:

And then there were all these other times that Shaq did very bad things to poor, innocent backboards. Starting back in his younger days at Louisiana State University.

I mean…wow. Just wow. If you were one of the few that never quite understood the hype, you surely get it after watching those rim-busting beatdowns. Nobody had ever seen a force like Shaq before—or since.

Of course, not everyone was a fan of O’Neal’s strength and physicality.

“Shaquille sends a message about how the game is played now, about force and power,” John Murray, then-head of the Department of Human Development and Family Studies at Kansas State University, who had done extensive research on TV violence and its effect on children, told the New York Times‘ Harvey Araton in Jan. 1994. “It’s another example of how violence has permeated all sports, how it’s become the primary sports marketing outtake.

“Watching the games over the holidays, it seemed to me that it’s worse than ever,” Murray said. “Of course, it affects kids’ behavior. Ripping down the rim isn’t supposed to be part of basketball, but kids see Shaquille doing it, so it becomes incorporated into their culture.”