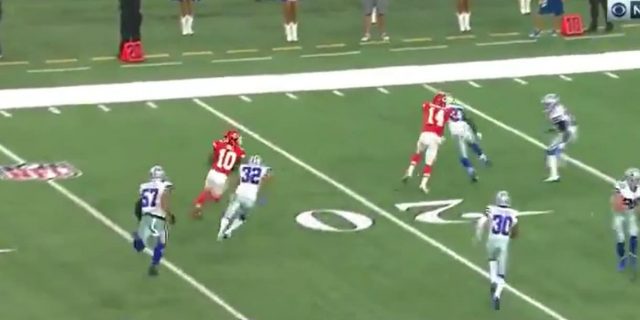 The Dallas Cowboys were in cruise control…until Tyreek Hill came and made the entire team look like fools on an improbably mini Hail Mary run.

Dak Prescott and Cole Beasley were running the show in Dallas today until the Kansa City Chiefs decided to perform some incredible trickery of their own.

Tyreek Hill, who had been relatively silent throughout the first 29:59 of the game. When that final second rolled around, he attacked, which resulted in an absolutely remarkable touchdown to bring the Chiefs within four.

HOW DID YOU DO THAT TYREEK HILL pic.twitter.com/Ua5DKny2os

Dallas tried out their prevent defense, putting seven defensemen near the end zone to defend the Hail Mary. It completely failed.

But, hey, any Dallas failure makes for a pretty good response on Twitter. So if the Cowboys can’t enter the second half on the losing end, at least we can revel in the fact that they were completely embarrassed.

We know Hill has speed. So does Alex Smith. And we all know that when you give him the ball, great things happen. Hill single-handedly made Jerry Jones cry into his massive piles of money on his private island on his massive yacht.

Money can’t buy championships and, apparently, it can’t buy a defense that can stop one guy from going 57 yards when they are already prepared to prevent it.

This game is just getting started. Let’s see what other tricks the Chiefs have up their sleeves down in Dallas.

NEXT: NFL 2017 Week 9 Season Notes: 5 Things You May Find Interesting