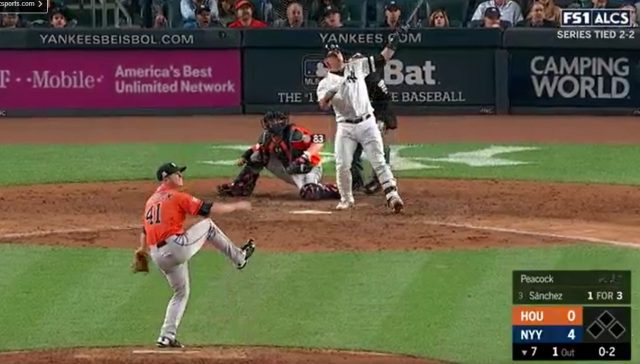 Need more run support? Gary Sanchez has got the New York Yankees covered with his first home run since Oct. 9.

Were people even considering benching the bat of Gary Sanchez? Come on, New York Yankees fans, are you serious?

Being patient with the young stud has paid off, as Sanchez continued his recent tear with a few RBIs and a monster home run, complete with admiration of his work.

I mean, who wouldn’t want to stop and admire the greatness that Sanchez launched deep into left field? According to Statcast, that ball came off the bat at 111 MPH and traveled 416 feet. It took 4.4 seconds for that ball to land in the seats and less time than that for Sanchez to win our hearts again.

It’s always fun seeing Sanchez crush home runs and this time, he stopped for a moment to gape at the beautiful shot he just launched.

The home run came off of reliever Brad Peacock, the third Astros pitcher tonight after Dallas Keuchel got shelled for four runs.

I guess you could say that Sanchez made Peacock’s pitch fly. Don’t worry, bird puns just fly over my head too.

The Sanchize has returned and everyone better watch out.

NEXT: New York Yankees: 'Thumbs Down Guy' Getting His Own Bobblehead