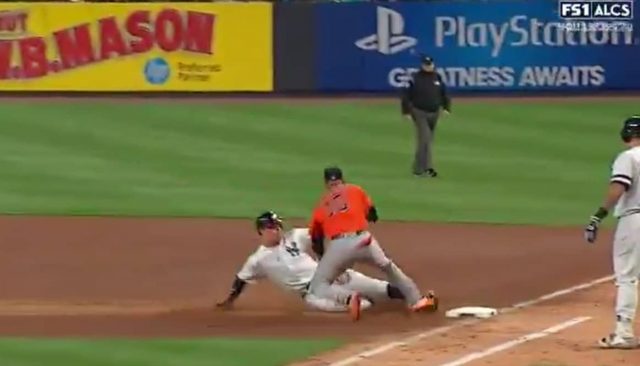 Is everyone done freaking out now? Let’s talk about the absolutely ridiculous double play we just witnessed against the New York Yankees and Aaron Judge.

He’s out! No, he’s safe! Wait…he’s out anyway? The New York Yankees just made Game 3 memorable without yet scoring a run.

Here’s the lowdown: Gary Sanchez got out, Aaron Judge got doubled off at first…but did he? Upon review, he was ruled safe before the Astros attempted to throw him out at second and Judge almost beat the throw.

Overturned. Judge ruled safe … Then out on the appeal. #ALCS pic.twitter.com/tlL0HO1akk

Now do you get it? You likely have to watch the replay thousands of times before you actually get a semblance of what the heck is going on in the Stadium right now.

Judge was called out, although he was clearly safe in sliding back to first. The kicker was that he actually should have been called out anyway for not touching second base on his way back to first after the catch.

And then the Astros were ready to make that easy throw to second and Judge decided to make it difficult, just like the MVP race. And he was ALMOST safe.

Let me tell you, you’re never going to witness that much craziness in a ball game for a long time. It just so happens that this insanity happened during the playoffs. How do you like them apples?

If your head is still spinning, you’re okay. It’s just a very bizarre, unorthodox play that you rarely (if ever) see in the majors. And challenging it definitely upset the rhythm of the Yankees.

Well, that was fun. Now can we score some runs for Sonny Gray, please??