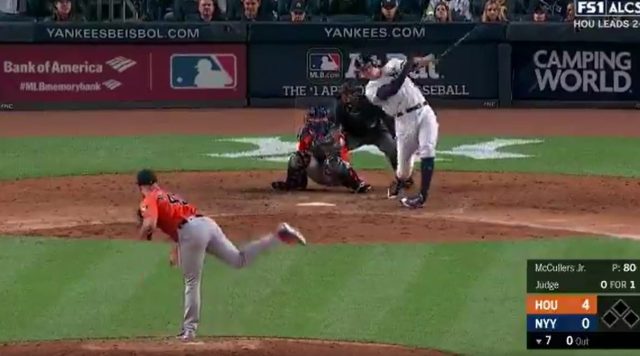 The New York Yankees are losing by four runs? Aaron Judge says “I OBJECT,” as he steps up and mashes.

There’s a whole lot of negativity circling around the New York Yankees as the game wears on. Bottom of the seventh, down four runs. Their goose is as good as cooked, right?

WRONG, says Aaron Judge, who turned into the monster he was just a month ago by blasting a solo shot to center field.

#AllRise: Aaron Judge hits a MONSTER home run to get the Yankees on the board. pic.twitter.com/xrGy3EZnsH

Lance McCullers Jr. had himself quite a night but I think the greatest thing he did was allow Aaron Judge to return to his former self. For that, we salute you.

Holy cow, that ball was smoked though. According to Statcast, Judge’s home run had an exit velocity of 111.6 MPH and traveled 427 feet into Monument Park.

We saw a home run from him last night and another from him tonight. The Yankees better keep this series going because it seems like this guy is just getting back to form.

Of course, the Yankees followed up his solo shot with a triple from Didi Gregorious, who scored on a sacrifice fly from Gary Sanchez to cut the lead to only two runs. And the Yankees continue to threaten.

What would you say if I told you that Aaron Judge hit a legit home run in the playoffs? Because he just did and now the Yankees are incredibly pumped up.