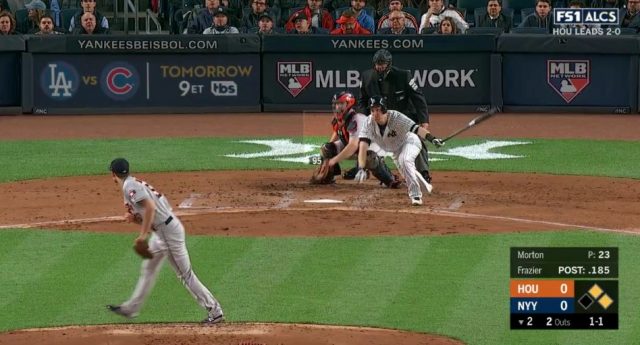 The New York Yankees took a 3-0 lead on a masterful swing by Todd Frazier, flipping a pitch on the outside corner from Charlie Morton barely into the right field bleachers.

I mean…how did that ball get out? The ToddFather NEVER hits it out to right field. And yet, he is now reaping the rewards of his own personal short porch at his new home stadium.

Now that he realizes he can make that opposite field fly ball sneak out, we might just see more of that later on this series.

Not only that, but he went berserk after the shot, signaling to the Bleacher Creatures. Sure, he hasn’t been in the Bronx for too long but it seems like he feels right at home.

Another bold move by Brian Cashman is paying off in the postseason. First Didi Gregorius in the Wild Card game and the ALDS, then Tommy Kahnle.

We may call Todd Frazier the ToddFather but it looks like he just made Charlie Morton his daddy.