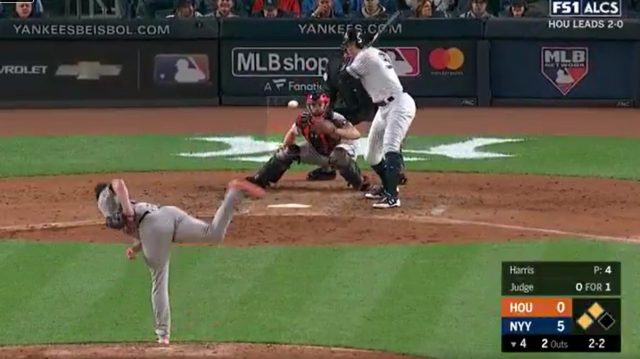 Remember when we said Aaron Judge’s bat was non-existent this series? Well, he just shut everyone’s mouth by blasting a three-run home run.

Baseball is so much more fun to watch when the New York Yankees actually decide to start scoring runs.

Cue Aaron Judge, the guy who hasn’t hit a home run in what seems like eons. He got it out of his system against the Houston Astros tonight.

Talk about NEEDING one. Aaron Judge needed this. A fastball, of course. #Yankees up 8-0.pic.twitter.com/ie9qEIM58G

With the wind whipping in the Stadium tonight, Judge took a pitch up and in and hit it up and out. The line drive home run certainly wasn’t one to break out the measuring tape for but it brought in three runs regardless.

Another “just gone” home run for the Yankees and they have taken a commanding 8-0 lead behind a strong performance thus far from CC Sabathia.

I wouldn’t call this game a must-win but it kind of is for the Yankees. At least their offense seems to be starting to come alive in their home ballpark.

Glad to have you back, Aaron Judge. It’s been far too long since we’ve heard “ALL RISE!”