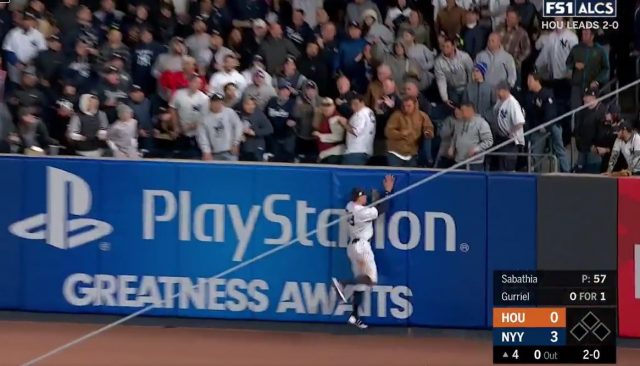 Think Aaron Judge has been invisible this series for the New York Yankees? His defense is on another level despite his struggles at the plate.

WHAT A CATCH! ?#ALCS pic.twitter.com/y4HOTuIhLy

While it wasn’t another home run robbery, he still gave his body to help CC Sabathia keep a runner off the base paths.

Of course, after he made this amazing catch, he did a perfect somersault and was serenaded with chants of “MVP” throughout the Stadium.

And rightfully so! While his bat has been relatively silent for the Yankees, he’s done a stellar job on defense, keeping the games close for his starting pitchers.

But in all honesty, did that wall go through concussion protocol? It’s taken a beating before but when Aaron Judge runs full speed into it? There has to be some repercussions.

Regardless, Judge is doing what he can to stay afloat in this series but his bat needs to pick it up. Maybe the momentum from that stellar catch will encourage him to hit a little better.